The 20th century press archive includes around 19 million press clippings and other documents, grouped thematically in folders on topics and events, people, companies and goods.

It goes back to the central office of the Hamburg Colonial Institute founded in 1908 and has been expanded into a globally unique public press documentation in the Hamburg World Economic Archive (HWWA).

In 2007 it was taken over by the German Central Library for Economic Sciences (ZBW) and merged with the economic archive of the Kiel Institute for the World Economy (IfW) founded in 1914 . Active collecting ceased at the end of 2005, but the archive is still accessible to the public.

The task of the "central office" was "the concentration of all scientific and economic colonial endeavors". Right from the start, this also included observing colonial endeavors abroad. After just a few years, the central office was transformed from a free information center for colonial questions primarily for the Hamburg merchant community into a comprehensive archive for global issues from politics and business. After the loss of the German colonies in World War I , the change of name to “Hamburgisches Welt-Wirtschafts-Archiv” sealed this reorientation in 1919. The HWWA's workforce reflected its importance and grew from 54 in 1919 to 183 permanent or temporary employees in 1958 - a level that seems to have remained largely stable until the end of the 1990s.

The Kiel Economic Archive, which was founded shortly before the outbreak of World War I, and its library, were closely linked to the scientific work of the IfW, which was aimed at penetrating global economic relationships and utilizing them in practice. In 1966 the IfW library was given the function of a central library for economics in the Federal Republic of Germany by the German Research Foundation (DFG), and in 1993 the department was renamed accordingly.

In both the First and Second World Wars, both archives were closely involved in the foreign and war economic planning of the German Empire and the Nazi state. From 1936 onwards, “confidential reports from the foreign press” provided selected business “leaders” and Nazi agencies “largely unfiltered information and comments on economic issues from foreign media and were unique in Nazi media policy”. The HWWA and IfW put themselves at the service of the Nazi regime in the “foreign cultural and information policy acting with informal means”, which complemented the military expansion policy.

In 1996 the HWWA and the ZBW / Wirtschaftsarchiv began working more closely with the aim of merging the two archives. Since the beginning of 2001, the articles, which have been indexed according to a new common system, have been made accessible via a nationally searchable reference database, "EconPress". Following a recommendation from the evaluation within the framework of the Leibniz Science Association in 2003, the current press documentation was terminated at the end of 2005 and the materials were frozen at the current status. The existence of the HWWA ended in 2007 with the integration of its press documentation and library into the ZBW as part of a newly established foundation under public law. Today the press archive is one of the (research) infrastructures of the Leibniz Association .

While the collection activities of the Hamburg Archive initially concentrated on the German colonies, “before the First World War ... at the instigation of Hamburg merchants, the economic and political development of non-colonized areas was included”. From 1919 at the latest, the press archive was collecting “excerpts on a global scale”. It was divided into four areas according to a system developed by Heinrich Waltz from 1911, the “Hamburg System”

More than 1,500 sources were evaluated for the press archive, and their broad international distribution provides access to the history of ideas and the history of the reception of topics. The collected publications occasionally go back to around 1826. While the personal archive was only available in paper form until it was digitized, since the 1960s the holdings of the material, goods and company archive have been filmed on roll film or microfiche at ten-year intervals and the originals have then been collected .

The holdings of the Kiel Economic Archives are less comprehensively documented. According to their own presentation, they are divided into a subject archive, which was primarily used for research and teaching at the IfW and was filmed in full by 1945, a personal archive that is exclusively available in paper form, which also contains publications by these people, and a house archive with publications about the IfW itself , which is also available in paper form. The corporate archive, which in 1958 comprised around 4800 companies and more than 5600 German and foreign scientific and cultural societies and institutes, political parties and business associations and represented “one of the most complete collections of company history in the 20th century”, is no longer mentioned in the self-presentation today . The closed “war archive” from 1914–1918 with a million newspaper articles was lost in 1942 after a bomb hit. For 1958, when six scientific specialists and a total of more than thirty employees were involved in the collection and organization of the material, the total size of the economic archive was given as more than three million, for 1993 with more than ten million newspaper clippings.

Parts of the holdings of both archives are now accessible on the Internet via the 20th century press kit.

Partial digitization of the holdings and the 20th century press kit

The DFG financed the retrospective digitization of historical press articles on paper, roll films and microfiche of the archives of the HWWA and the economic archive of the IfW from 2004 to 2007 with approx. 880,000 euros. The historical press material of both institutions from the beginning of the 20th century to the currency reform in 1948 and the establishment of the Federal Republic in 1949 was digitized. The holdings of the Research Center for Übersee-Deutschtum (1934–1945) were also recorded by the digitization project

In the project, the paper folders of the personal archive were scanned and metadata (folder and document ID and page number, occasionally also source, date of publication, author and title) were added by internal project staff. Font recognition by OCR was not possible because of the partially used Gothic fonts, the constantly changing fonts in the article sequence (as well as languages) and the z. T. poor quality of the templates are not used. The personal archive was edited at the beginning of the project. The approximately 5500 portfolios of people created before 1949 are fully accessible online. 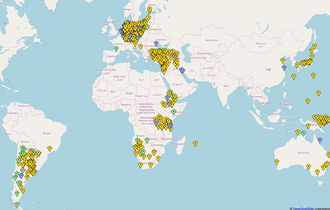 Digitized parts of the material archive: In addition to Germany (incomplete) and Hamburg (complete), the former German colonies, the Middle East, Japan, Argentina and the (Ant) arctic.

The parts of the archive on roll film (up to 1960) were also digitized. Since neither the folders nor the documents were machine-readable on these films, such formal elements could not be adopted. Instead, the pages had to be “cut” with specially developed “slider” software, merged into documents and folders and given metadata. This labor-intensive process was only carried out to a small extent by the end of the project in 2007 and apparently continued until 2019. The folders were made accessible via the web application “Press folder 20th century” created as part of the project. Around 11,000 roll films have been digitized at the companies, of which around 7,500 are currently accessible online. In the case of material and goods archives, the proportions of digitized material accessible online seem to be significantly lower. The persons are indexed alphabetically by name, while the companies are accessible both by name and geographically via their headquarters and industry lists. The subject topics can be accessed via the hierarchy of subject and country systematics as well as by searching for subject and geo key words from the GND and via a world map with geolocations.

For reasons of capacity and, above all, copyright law , only the holdings initially up to 1930 and in a second funding phase up to 1948/49 were digitized. Numerous individual articles within the dossier are subject to blocking notices if the death of the author or, in the case of anonymous or pseudonymous works, the date of publication was less than 70 years ago. A moving wall should unlock more and more documents over time. Almost one million of the approximately 5.7 million documents digitized as part of the project are publicly accessible via the application.

Since 2020, direct access to all digitized films has been offered, including the holdings of the HWWA up to 1960 and the material archive of the Kiel Economic Archive. A content development is available at the film level. For copyright reasons, however, access is restricted to the reading rooms of the ZBW.

In October 2019, the ZBW donated metadata on 5,000 personal files from the 20th century press kit to the Linked Open Data project Wikidata .