Microform is the generic term for analog images of printed originals reduced to film material as well as digital information written directly onto the medium like on a printer (Computer Output on Microfilm (COM)). The main microforms are microfiche ( microfiche of French "fiche" leaf paper) and microfilm on spools or in cartridges (roll film). The most common is microfilm, format 105 mm × 148 mm (DIN A6), 16 mm and 35 mm microfilms on reels. A special form is the film card , a punch card in which a window is punched out on the left or right side, into which a 35 mm microfilm image is glued.

Microfiche (scan of a section in small image format)

Microforms are mainly used for archiving . One reason for the filming is the relatively long shelf life and technical independence of the medium. Many documents / publications that have to be kept for a long time, threatened with decay, but also particularly valuable documents / publications are therefore filmed; Digitization can also be carried out in parallel . In this case, one speaks of “ hybrid archiving ”. Microfilms are read with microfilm readers and, in addition to reading, reproductions can be made by reading / re-enlarging devices.

Until the emergence of powerful, purely digital, audit-proof archiving systems for mass data, the legally required archiving of business cases (e.g. copies of invoices, payment transactions of a month / quarter / ... on bank accounts) was predominantly carried out using digital COM filming on microfiche.

In addition to archiving, up to the wide availability of suitable storage media for computers, advantages were also gained from the small footprint and the possibility of duplication. Larger information systems, for example for telephone subscribers, catalog orders and travel bookings, were based on this method. Extensive technical documentation, for example in the vehicle industry, was also stored on microforms and duplicated for branches / workshops.

The microfilm was invented by René Dagron in Paris in 1859. During the siege of Paris during the Franco-Prussian War in 1870/71, he helped to improve communication between unoccupied France and the capital. 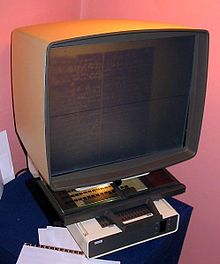 The properties of microforms are defined in various DIN , EN and ISO standards.

Although monochrome film is the most widespread form, there is also color microfilm , which is only produced worldwide by Ilford as "Ilfochrome Micrographic", and which differs greatly from color films .

The shelf life of microfilm should be up to 500 years with appropriate storage (21 ° C, 50% relative humidity ). A fitting slogan from a microfilm company is “Digital for now, analog forever” - meaning: “Digital for the moment, analog for eternity”, or: “Save digitally, archive analog”.

Microfilm is experiencing a renaissance in the digital age thanks to the possibility of laser exposure. During laser exposure, red, green and blue lasers are modulated according to the color channels of digital RGB files and focused on a photographic film. This means that colors can be written very precisely and precisely, pixel by pixel.

It is also possible to archive digital data on microfilm. However, the data density that can be achieved is low. There is also the risk of digital obsolescence .

In order to bring microfilmed documents back to paper, special printers - so-called reader printers - were built. Before digital technology, which made printers independent of scanners, conventional analog desktop copiers were converted into printers together with a microform viewer. These photograph the image projected for the viewer at the push of a button and put it on paper. The modification of the original copier essentially consisted of the changed optics that project the original onto the photoconductor , making these analog devices very bulky. Because of the temperature created in the microfilm by the exposure lamp, the amount of light is lower than with conventional copiers, which means that the exposure must be longer and the device prints more slowly than the original copier. The high voltage for the electrophotographic process is significantly changed, since Microform is negative film and requires a new reversal of the color values from the film to the printout.