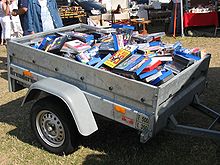 Obsolescence in which economy and particularly in the industrial obsolescence of products - or even knowledge - by the limited shelf life of technical components and the change of fashion or technological progress .

If this process is consciously brought about by the manufacturer for strategic market reasons, one speaks of planned obsolescence .

The word obsolescence stands for "wear out, grow old, go out of fashion, lose prestige, lose value" ( Latin obsolescere ). The associated - and more frequently used - adjective obsolete in the sense of "no longer in use", "obsolete" or "out of date" denotes generally obsolete, mostly outdated statements, norms, facts or therapies.

Objects of daily use are intended for repeated use , which is accompanied by constant wear and tear , material fatigue and, finally, wear and tear , until they finally lose their functionality . They then no longer fulfill their original purpose and are therefore unusable. For this reason, the natural lifespan of all utensils is limited in time. They must - if the need continues - be replaced by at least equivalent. From the point of view of the industry, it is a part of the product life cycle during which there is a constant readiness for delivery for items that are no longer functional.

In the US, the obsolescence ( English obsolescence ) a term commonly used for the shorter useful life of goods, especially in the context of the "Throw-it-away" psychology ( English drop it ), as of knowingly inferior product quality or short-lived technical durability . It appeared there as a marketing strategy for the first time in the automotive industry . While Ford propagated longevity, General Motors began using “planned obsolescence” for the first time in 1923 with Alfred P. Sloan , in order to achieve the highest possible sales volume through quick model changes . The management relied on artificially reducing the durability and accelerating the wear and tear. In the Phoebus cartel , the world's leading light bulb manufacturers agreed in January 1925 to artificially limit the service life of light bulbs to a maximum of 1000 hours under threat of sanctions. Consumer Goods ( english durables ) should the Consumer Engineering Handbook from the year 1932 are designed according to the users they like consumer goods would treat. The consumers thus mediated feeling older by the possession of products not modern ( English up to date ) to be ( English out-of-fashion ), was the pioneer of psychological obsolescence. In 1954, in the face of falling demand, Brooks Stevens demanded that the expiration dates of American manufactured goods be lowered.

Volkswagen pursued the opposite strategy with the VW Beetle ("it runs and runs and runs ...") and began advertising in the USA in 1959 with the campaign that VW would not exchange cars just for the sake of exchanges. In 1960, Vance Packard criticized planned obsolescence in his book The Waste Makers as a systematic attempt by big industry to "turn us into wasteful, indebted, eternally dissatisfied individuals".

In Germany, the idea of ​​obsolescence in the context of industrial product design was first taken up in 1968; Burkhardt Röper was able to identify “no example of planned wear and tear” in 1976, which was already met with heavy criticism in 1977 as “denial of reality”. Legal questions on this were first dealt with in 1983 when obsolescence was planned in the fashion industry .

A distinction is first made between natural and planned obsolescence . The natural obsolescence occurs in age-normal wear and tear, if items have reached the end of its expected life and lose their ability to function. The planned obsolescence , however, is conceptually provided by the manufacturer artificial shortening of product life cycle so that products are prematurely unusable. It consists in the deliberate limitation of functionality, although a longer service life would be possible. In the French Consumer Code, Code de la Consommation (CdC) , planned obsolescence ( French obsolescence program ) is even defined as "all techniques with which an entrepreneur intends to intentionally reduce the life of a product in order to increase the replacement rate" (Art. L 213-4-1 CdC).

It can be divided into material, technical, psychological and economic obsolescence.

The fashion is part of the visible obsolescence because certain fashion designs or styles a fashion trend subject to a new fashion direction is evident. As a result, fashion-conscious consumers are forced to replace them through peer pressure, although full functionality is still available. Therefore, fashion can be defined as a collective adaptation . The popularity of a product is significantly influenced by its image , which in turn can be manipulated through changed (updated) designs and marketing, including advertising. Design is therefore a tried and tested means of artificially inducing obsolescence.

It is therefore in the interests of producers to artificially shorten the product life cycle in order to increase the sales volume.

Obsolescence management ensures that components that are no longer produced and that are built into products are replaced in good time with comparative types or are deliberately stocked for repairs. The aim of this management process is to ensure that the life cycle (production and repair) of your own product is not adversely affected by the availability or failure of the required components. If carried out correctly, it serves to avoid or at least reduce production or service failures. Further goals are cost savings and the avoidance of supply bottlenecks. As part of risk management , obsolescence management is used in all sectors of the capital goods industry (capital goods, infrastructure, durable goods, consumables, software products, etc.).

The average initial period of use (the period of use only by the first-time user) of large household appliances fell slightly in Germany between 2004 and 2013 from 14.1 to 13.0 years; in the entertainment electronics sector, flat-screen TVs had an average initial period of use in 2007 from 5.7 years, this value fell to 4.4 years in the years up to 2010, and then rose continuously to 5.6 years in the following years up to 2012. In the case of notebooks, the analyzes of material obsolescence show that there is a different level of obsolescence between devices for private households (consumer notebooks) and commercially used notebooks.