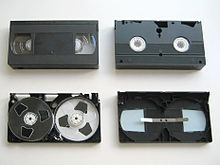 A video cassette consists of a plastic cassette made of polystyrene , acrylonitrile butadiene styrene and other plastics, in which there is a rolled up magnetizable coated plastic tape ( magnetic tape or video tape ). The video cassette is used as a data carrier for films.

There are various standards, data formats and cassette sizes for use in various devices for recording and playing back films ( video recorders ), for example: VHS , Betamax and Video 2000 video cassettes for analog video and audio signals and digital video cassettes such as DV and miniDV for recordings using a camcorder .

With the emergence of subsequent technologies at the beginning of the 21st century, such as recordable DVDs , hard disk recorders and recordable BD-Rs , the importance of the video cassette has decreased significantly.

Like all data carriers, video tapes have a finite lifespan , which depends to a large extent on correct storage, but also on the type of tape . If stored in a dry place at normal, constant room temperature, up to 35 years are possible in rare cases. 20 years are almost always reached. A distinction must be made between two effects on aging: