A camcorder , also known as a camcorder , is a video camera with a built-in video recorder .

The fact that it is a device that consists of two clearly distinguishable components is also shown by the name camcorder . Camcorder is a cross between cam era and re corder .

Before introducing the camcorder

Before there were camcorders, videographers either had to connect the video camera to a stationary video recorder with a long cable or take a separate, portable recorder with them. The first portable video recorders were very heavy and were therefore carried on the back.

Later, hang-on recorders that weighed only a few kilograms were used ; they were used until the 1990s.

JVC camcorder based on MiniDV

The first devices that can be described as full-fledged camcorders were the Betamovie devices from Sony , which came onto the market in 1983. The Sony devices were able to record the image from the built-in camera directly onto a beta max tape. Playback, as it is common in almost every video recorder and camcorder today, was not possible with the Betamovie models from Sony at the time because a smaller head drum had to be used to keep the device small enough; the video tracks could only be read by a full-size head drum of the type used in home equipment. At the same time, JVC presented its own developments based on the VHS-C format. They had the advantage that the material filmed could be played back either through the camera's viewfinder or on a connected television or monitor. With today's camcorders, the data can be viewed while recording or afterwards in the camera's viewfinder or on an LC display integrated into the camera . 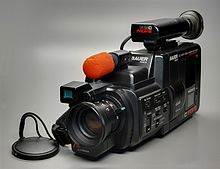 In 1985, Sony after the failure of Betamax be Video-8 system on the market, the cassette about the dimensions of a Philips - Compact Cassette reached what further miniaturization enabled. Camcorders with the Video-8 system became the segment with the highest sales in the course of the 1980s and 1990s until the introduction of digital formats. Sony in particular offered stationary devices for Video 8, which was technically superior to the competitor format VHS-C, which, however, was rarely used except by ambitious amateur filmmakers and in the film school sector. Nevertheless, there was no new edition of the format war .

While shoulder camcorders were initially offered in entertainment electronics , as in the professional sector, which enabled more stable and calmer camera work, the trend in the second half of the 1980s was towards ever more compact and lighter models. In 1989 Sony finally brought the first camcorder of the Traveler series, the CCD TR-55, onto the market, which heralded the size of the palmtop camcorder. The retaining strap, the cassette slot and the camera head were arranged directly next to each other. In the 1990s, these camcorders, along with the Video-8 system, dominated the largest segment of the amateur video market. In 1991, the first palmtop camcorders in the higher definition Hi8 range were offered.

Magnetic tape: from VHS to DV

The original video technology recorded the analog PAL signal ( NTSC in the US ) directly on the magnetic tape of a VHS , S-VHS , Video-8 , Hi8 or Betacam video cassette.

Since the mid-1990s, analog technology has been replaced by digital recording formats in both the professional and amateur sectors. The currently most common system in the amateur and semi-professional area is DV , there are also MicroMV and Digital8 , although the latter two formats are rarely used. Originally developed for the amateur sector, due to its quality, DV is also used in professional production and broadcasting sectors.

There is also a trend towards the use of digital storage media in television production. While Betacam and Betacam SP were dominant in analogue recording , they have increasingly been replaced by Digital Betacam and Digital Betacam SX in recent years . All of these standards use so-called L-cassettes with the form factor of the beta cassettes. The DVCAM recording formats with the DV cassette format and DVCPro with slightly larger cassettes are also used for simpler, low-cost productions .

Magnetic tape: from SD to HDTV

With the increasing spread of high definition television, the providers have developed recording systems for HDTV video productions. For some years now, there has been a further transition in the area of ​​television productions through the use of HDTV cameras that record onto special L-cassettes using HDCAM . Competing formats are DVCPro HD on memory cards (P2) from Panasonic and D9 HD on VHS format cassettes from JVC. For smaller productions and amateur filmmakers, Sony developed HDV , which records on MiniDV cassettes as before, but compresses the images with MPEG-2 in order to obtain the same playback length as with DV. However, the trend is called AVCHD. The format was jointly launched by Sony and Panasonic. Canon has now also joined. AVCHD compresses according to a slightly modified H.264 codec. However, all three manufacturers currently use slightly different dialects of the codec, so that the video data cannot be exchanged.

Moving into the cinema

Since the year 2000 there have been camcorders which were developed for cinema production; the most important group are devices based on the HDCAM standard. These camcorders cost five to six-figure sums and were used by numerous directors, producers and cameramen for the productions when they were available. These digital cinema cameras differ significantly from cameras for TV production and home users.

Regardless of this, consumer camcorders were also used in cinema productions before, be it because of their visual style or the more direct way of working that enabled the devices, which are much more compact than film cameras. An example of a feature film shot entirely on video is Das Fest by Thomas Vinterberg , the first Dogma film. 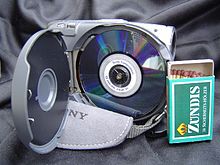 A new type of camcorder has been on the market since around 2004. This works with the compression format MPEG- 2 and records the data not only on DV cassettes but also on tapeless media. As of 2007, AVCHD will be added as a further amateur format , which works with even stronger compression according to MPEG-4 and thus offers smaller file sizes with the same image quality as MPEG-2. Media used for recording are typically rewritable DVDs , exchangeable microdrives , integrated hard drives or - without any moving parts - memory cards . With this type of camcorder, too, the data is initially recorded by the image sensor as RGB data - as with digital video. With many tapeless camcorders, the image sequences can be cut, rearranged, cross-faded or deleted directly, since there is no need to rewind the tape.

The advantage of these formats is that they support HD, which DV cannot. The disadvantage of MPEG-2 (HDV) and MPEG-4 (AVCHD) compared to DV is that the data is compressed more and therefore more losses occur. MPEG-2 / MPEG-4 is therefore more recommended as an archiving codec for work that has already been completed, which is also its sole purpose outside of the amateur field; With every further processing, such as editing, the MPEG material is compressed again, so that the artifacts increase sharply, while DV saves anew with virtually no loss. This can only be minimized if a correspondingly high quality codec is used when editing .

Another disadvantage, especially of AVCHD: the system compresses so effectively (i.e., it reduces the storage requirements of the video) that you need a very powerful computer for editing.

In addition to being easier to transfer to PCs than tapes, digital storage media are also characterized by greater reliability and service life. Furthermore, DVDs from DVD camcorders can also be played in DVD players or recorders. However, not all DVD formats are compatible with all playback devices. A distinction must be made in particular between “+” and “-” formats. Subsequent editing is only possible with the rewritable media DVD-RW and DVD-RAM .

Camcorders with memory cards, usually SD cards (secure digital), require large storage capacities: A one gigabyte SD card is sufficient for around 20 to 40 minutes of MPEG-2 recording, but only for around five minutes of DV, depending on the camcorder. The AVCHD format is supported by the manufacturers Canon , Panasonic , Samsung and Sony .

Tapeless recording in the field of television production and cinema is slowly gaining ground and is e.g. B. with XDCAM and XDCAM HD (on the Blu-ray version Professional Disc for Broadcast and on SxS memory cards ) from Sony, DVCPro HD from Panasonic (on the Panasonic P2 memory card system ) and Editcam from Ikegami .

Flip video pocket camcorders were introduced by Pure Digital Technologies in the United States in 2006.

Camcorders have numerous possible differences in their specific designs, which are determined by their purpose and price. In the following, an attempt is made to illustrate the different distinguishing features of the known designs.

Action camcorder with underwater housing on a diving mask

A number of characteristics determine the quality and purpose of a camcorder:

In addition, the plays ergonomics an important role. Adjusting the sharpness using buttons instead of a ring on the lens can easily spoil the joy of filming. Some important settings are also hidden in the depths of the menus. A touchscreen can be advantageous here for navigation, but in practice has the disadvantage of fingerprints on the display, which is also used for creating images. In principle, functions that are switched using buttons are ergonomically preferable to those using menu items.

In the non-professional sector it can be observed that more and more models without a viewfinder are being produced. This makes the devices cheaper, especially since many users use their camcorder with the monitor that can be folded out to the side. However, a viewfinder has the advantage that you can support the camera on your head, which significantly stabilizes its position and reduces shaking. In addition, in bright surroundings or backlighting, a better image assessment is possible than on a display.