A magnetic tape is a data carrier . It usually consists of a long, narrow film made of plastic that is coated with a magnetizable material. The tape is wound onto winding cores (bobbies ) or reels, often built into cassettes . 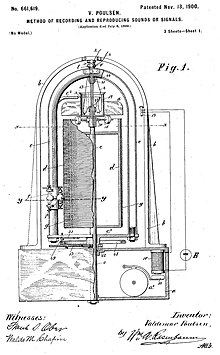 US patent for Poulsen's invention 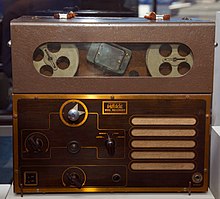 A wire-based voice recorder from 1945

The forefather of magnetic tape technology is the magnetic sound recording on wire, invented in 1898 . In this invention, sound recordings were stored on a thin steel wire. The recording and playback speed was 610 millimeters per second. For the usual capacity of one hour, the wire was 2195 meters long and, due to its small thickness, had space on spools a few centimeters in diameter. This technology was quickly superseded with the advent of commercial magnetic tape recorders. However, wire recorders continued to be used in satellites and other unmanned spacecraft until the 1970s.

The first magnetic tapes were introduced in the USA as early as the 1930s. In Germany, AEG and IG Farben developed the corresponding technology from 1935, which was then used in the 1940s to record analog audio signals. At first they were made of coated paper or of homogeneous magnetizable material. Today's magnetic tape is a development by AEG and IG Farben ( BASF ) between 1935 and 1940. Later they were also the basis for magnetic video recordings ( Mavicord , MAZ tape ). They then served as data carriers for electronic data processing alongside drum memories in the large computers of the 1950s and 1960s. Magnetic tapes come in a wide variety of formats and are still used today for the digital preservation of video, audio and generally digital information for electronic data processing. The precursor of magnetic tapes were in the analog sound equipment, the record and the Edison cylinder , in data technology paper tape and punched cards . In addition to mechanical and magnetic disks, ferromagnetic wires were also used in data technology. Digital magnet wire devices ran into the 1960s, records even longer. Due to the large surface area available for storage, magnetic tapes offered much higher data densities and write and read speeds than the older technologies. Due to the disadvantages that result from the exclusively sequential access to the data on a magnetic tape, they were at least partially replaced by drum memories or magnetic disks and now increasingly by hard disks that allow random data access .

The use of magnetic tapes is currently on the decline, with CDs and semiconductor-based MP3 players dominating the audio sector . In the video and multimedia sector, optical data storage media and, to a lesser extent, semiconductor-based media are mainly used. In data technology, especially in the private sector, a combination of the media mentioned above dominates, with semiconductor-based USB sticks and external hard drives (USB, FireWire, eSATA) also displacing magnetic tape technology. Today, however, magnetic tapes are also used on a large scale for professional backup and archiving, especially of larger data archives. However, hard drive-based systems in the form of virtual tape libraries are now gaining market shares in this area as well .

Magnetic tapes originally had an enormous advantage: they could accommodate many square centimeters of data storage in a very small volume. This advantage was bought by the impractical sequential access method. This advantage is hardly effective today, because today's hard drives work with far more sophisticated recording methods (e.g. perpendicular recording ) than tapes and thus achieve extremely high write densities. As a result, hard disks can already achieve a higher storage capacity (per volume) than magnetic tapes, even without the disadvantages of the sequential access method. This also applies to current semiconductor-based and optical storage devices at a significantly higher price.

In the area of ​​larger data archives, magnetic tape systems still have advantages over hard disk systems today: With robots and magnetic tapes, it is possible to accommodate significantly larger amounts of data in a so-called tape library than in a hard disk storage system of the same size. In addition, magnetic tapes - in contrast to hard drives - do not have to be kept in constant motion; as a result, they are more energy efficient, generate less waste heat and are less sensitive to vibrations and other mechanical influences. In this respect, magnetic tapes - especially for long-term storage of seldom used data - still have an authorization and market relevance.

In the CERN Advanced STORage manager , where petabytes are added every month , hard drives are only a cache for tens of thousands of magnetic tapes.

The resolution of the magnetic tapes depends on the sensitivity of the magnetic layer, the width of the tape and its playback speed. Accordingly, very different formats and tape qualities have been developed over time. In the 1980s, complicated coatings became possible. Instead of oxides, highly coercive pure metal layers were applied. Modern video recording tapes in Betacam SP through to HD-SR tape are highly sensitive data carriers for modern high-definition HD TV television:

Almost all formats were also used for the digital recording of computer data (from the 2-inch reel to the datasette ).

In order to make self-supporting tape rolls more reliable, the back of the tape can be coated. Even a thin backside matting improves the winding behavior.

For the analog recording and reproduction of audio signals with audio recorders , tapes with reels and later (after 1970) cassette recorders with compact cassettes were widespread in the past (before 1970). For professional users, such as radio broadcasters, cantilever tape wraps were common on bobbies . In the office daily, primarily in dictation , but also in answering machines came microcassette used. Magnetic tape-based devices for digital audio recording or playback, on the other hand, were never very widespread; they could not prevail over CDs and especially against rewritable CDs . With the spread of MP3 formats and players, semiconductor-based memories are also becoming increasingly widespread in the audio sector.

For the recording and playback of video recordings or films (image and sound recordings) on tape, cassettes are practically exclusively used. The can magnetic recording (short MAZ) either analog classic or also digital. There are different standards, data formats and cassette sizes that have been optimized for use in different devices. For example, in the private sector, video recorders based on VHS were very often used for analog recording and playback of films . High quality systems such as Betacam have been developed for the professional sector . More modern systems use digital video cassettes e.g. B. DV and miniDV standard, both are particularly compact formats and have been optimized for recordings using a camcorder . With the advent of DVD-Video , rewritable DVDs and hard disk recorders as well as digital storage, the importance of video cassettes has also declined sharply - many video stores have meanwhile switched from VHS cassettes to DVDs.

Magnetic tapes used to be a widely used technique for data storage. For various reasons (costs, inconvenient handling, lack of robustness - especially with cheap systems) they are only rarely used today in the private and SoHo area and, if at all, only used for data backup and archiving . Instead, writable CDs and DVDs are predominantly used today, as are various USB media or external hard drives due to their larger capacities .

Due to their generally high reliability and long-term stability, magnetic tapes are still frequently used today for (batch) data processing as well as for data storage and archiving, mostly in tape libraries (sometimes with many thousands of tapes). Professional hard disk subsystems ( SAN , SAS ) hardly offer a better cost factor and are therefore only occasionally used as a replacement for tapes. The (re) writable CDs and DVDs, as well as various USB media or inexpensive external PC hard drives, which are common in the PC sector, have practically no cost advantage in the professional sector, because they apply here - apart from the much smaller capacity of individual data carriers - than for far too unreliable.