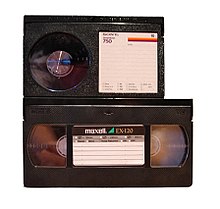 Betamax is the brand name of a half-inch magnetic tape system developed by Sony in the 1970s for recording analog video and audio signals . Betamax was developed for the consumer market and first appeared in the US and Japan in 1975. The introduction in the Federal Republic of Germany took place in 1978. Betamax providers were Sony (system developer), Fisher, NEC , Sanyo , Toshiba and Wega .

Betamax could not prevail in the format war against VHS from JVC .

Betamax was also a political issue : film production companies didn't want private individuals to be able to copy films. The protracted legal disputes also included the so-called Betamax ruling of 1984 in the USA , which acquitted Sony of the accusation of aiding and abetting illegal copying . This judgment has taken on new significance with the advent of music exchanges on the Internet .

The production stop for the last Sony Betamax devices EDV-9000 and SL-200D was announced on August 27, 2002. Until then, Sony had sold a total of 18 million Betamax players worldwide, four million of them in Japan.

On November 10, 2015, Sony announced that it would cease production of Betamax cartridges and MicroMV cartridges by March 2016.

A further development of the Betamax system was the Superbeta format introduced in the mid-1980s . (Superbeta is a trademark of Sony Corp.) Superbeta was backwards compatible with the normal Betamax format, i. H. all Superbeta recorders could also record and play back cassettes in the standard Betamax format. Compared to Betamax, Superbeta had a significantly higher resolution and lower image noise , but did not quite achieve the quality of the Super VHS system, which was also published at the time .

Sony's last attempt at keeping the Betamax format alive was ED-Beta (ED-Beta is a trademark of Sony Corp.), an evolution of the Superbeta system. With a video frequency response of 10 MHz, which corresponds to a resolution of around 600 lines (comparison: S-VHS approx. 400 lines, VHS approx. 250 lines), ED-Beta was the best analog video system for home use and could also work with digital ones Formats like DVD and DV compete. ED-Beta was also backwards compatible with its predecessors Betamax and Superbeta. ED-Beta cartridges looked like the conventional Betamax cartridges, but used a special, metal-coated tape.

ED-Beta only existed in the US and Japan; it disappeared from the market there very quickly. Sony made no more attempts to market the system in Europe.

Betacam and other formats

In the early 1980s, Sony developed video systems for professional and broadcast applications from the Betamax format . In this high-priced area, first Betacam , later Betacam SP and, from the mid-1990s, Digital Betacam , Betacam SX and later HDCAM and IMX (a type of MPEG Betacam) were introduced using time-division multiplex recording methods that were completely new at the time . However, these formats are not compatible with Betamax; sometimes they are also incompatible with each other.

Betamax's cassette format is also used for professional Betacam systems. However, these cassettes contain higher quality tapes and use different tape speeds in addition to a different track image. In addition, Betacam and the systems derived from it also have a large cassette (L-size) that is not available at Betamax because of the already longer running time.