from Wikipedia, the free encyclopedia
This is the spotted version , flagged on April 22, 2020 . There are 2 pending changes that have yet to be viewed.

As a consumer or consumer one is natural person referred to one or more goods or services for your own personal gratification acquires sale. 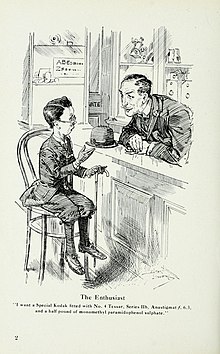 The term “consumer” has its origin in the activity of consuming products, which means that the person concerned may regularly take a certain amount of it and use it for a specific purpose until there is nothing left, in order to then buy a new one procure. The same process is also known as consumption , from which the term “consumer” is derived.

According to the definition commonly used in the EU, a consumer is to be understood as any natural person who acts in business transactions for purposes that cannot be attributed to their professional or commercial activity; see. Directive 93/13 / EEC .

According to Section 13 of the German Civil Code (BGB) , a person is already a consumer when he concludes a legal transaction , the purposes of which can predominantly neither be assigned to his commercial nor his independent professional activity. In the case of legal transactions that serve the dependent professional activity of a person, such as the purchase of work clothes, training literature, etc. by the employee , this person is a consumer. A consumer can also be a person who is also an employer but who concludes a legal transaction for private purposes. Consumers have to pay different consumption taxes depending on the consumer good or service . In addition, the consumption is usually subject to sales tax . The law supports and protects consumers. Over-indebted consumers have the option of filing for consumer bankruptcy.

In Austrian law, the term “consumer” is broader: If a person conducts a business that is not part of their company's operations, this person acts as a consumer ( Section 1 ( 1) (1) and (2 ) KSchG ). A consumer can also be a non-entrepreneurial partnership or legal person (such as an ideal association). Correspondingly, the bus journey of an employee to the workplace is a business (transport for a fee) in which the employee acts as a consumer towards the bus company, since the person is only employed, but not an entrepreneur. If an entrepreneur takes a private bus trip from his home to a friend, then he is also acting as a consumer, this trip is not part of the business of his company.

This expansion of the Austrian and German consumer concept is generally permissible, since the European directives specify a minimum level of protection and, as a rule, do not prevent the scope of the protection from being expanded.

It should be noted that the delimitation for each transaction (especially the conclusion of a contract) is made anew, whereby the determination is based crucially on the inner will of the person acting legally. For example, the lawyer who buys envelopes can be consumers if he wants to send private mail in them, but also entrepreneurs if he wants to use the envelopes for his law firm .

The definition of the consumer enables the protection of debtors to be graded. The consumer is the most protected in civil law . There are therefore regulations for special contract drafting and especially when using general terms and conditions (GTC) of an entrepreneur towards a consumer. When purchasing a consumer product from an entrepreneur , the supplementary regulations for the purchase of consumer goods must be applied.

In Austria the terminus technicus for the consumer is "consumer". This is protected according to the Consumer Protection Act 1979 (KSchG). The opposite term entrepreneur was also first clearly defined in the KSchG and was adopted there on January 1, 2007 when the commercial code was amended to become the company code . The old merchant term has been dropped.