When it was founded, NEC was the first Japanese joint venture with foreign capital. The co-founder at the time was the Western Electric Company, a manufacturer of telephone systems that belongs to the Bell Company . NEC began manufacturing telephones and switchgear. 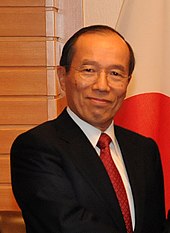 Former chairman of the board of directors of NEC, Kaoru Yano

NEC's main focus is on order chips , supercomputers , PCs, laptops, screens, peripheral devices (e.g. computer printers ) and the development of HD DVD , which was supposed to replace DVD , but failed because of the competing Blu-ray Disc format. The latest research and conception goes even further with the "Protein DVD" in collaboration with US researchers from Harvard Medical School in Boston. These DVDs are coated with a layer of the protein bacteriorhodopsin produced by genetically modified bacteria and are said to hold up to 50 terabytes. Contract chips from NEC Corporation were used, for example, in the Sega Dreamcast and Sega Saturn video game consoles . NEC also manufactured its own consoles such as the PC Engine , Turbo Duo and PC-FX .

NEC succeeded in mass-producing the first UMTS mobile phone that supports video telephony (NEC 606) and in correspondingly high quantities. However, this was only sold through the mobile operator "3" . Due to development and delivery delays, this was also the reason for the delayed market launch of '3' in Great Britain.

On March 11, 2002, NEC put the Earth Simulator supercomputer into operation. With around 40 T FLOPS , Earth Simulator topped the list of the most powerful computers in the world for several years . It is used almost exclusively for monitoring the environment, especially to predict climatic and natural disasters and thus help to reduce their effects.

Also in 2002 the NEC Electronics Corporation was founded, an outsourcing of the semiconductor activities from the group. With around 24,000 employees, NEC Electronics achieved sales of around 646 billion yen in 2006. This division should merge with Renesas Technology to Renesas Electronics in April 2010 .

In January 2011 it was announced that NEC and Lenovo wanted to merge in the PC business. Joint development, production and material procurement should create synergy effects that should help both companies to close the gap to market leader HP . The new joint venture is 51% owned by Lenovo and 49% by NEC. The end products should continue to be sold under the previous brand names.

In March 2020, the Japanese company Sharp took over 66 percent of the NEC Display Solutions division , which is responsible for the manufacture and sale of monitors in the professional sector.

The following parts of this section since 2012 seem out of date to be : Could reduced the gap with HP in 2011?
Please help to research and insert the missing information .

In October 2011, the EU, together with Asahi Glass and Schott AG, sentenced the company to a total fine of 128.7 million euros for illegal price fixing between 1999 and 2004 . The cartel with Samsung Corning Precision Materials had agreed the prices of picture tube glass for televisions and computer screens. Samsung Corning Precision Materials was not fined for reporting the violations to the Commission.