from Wikipedia, the free encyclopedia
This is the spotted version , flagged on July 30, 2020 . There are 8 pending changes that have yet to be viewed.

The PC Engine ( TurboGrafx 16 in the USA) was an 8/16 bit game console produced by NEC and the game manufacturer Hudson .

The PC Engine came onto the Japanese market in 1987 and impressed with its graphics and sound options that were special for the time. It is usually counted among the 16-bit devices because the graphics processor had a 16-bit structure. The console was sold under different names in many different model variants until 1994, but most of them hardly differed from the original device. The device was only available on the European market for a short time under the name TurboGrafx in Spain. The sale of this PAL variant had to be stopped a short time later for reasons of sales law.

The device was launched in the USA in 1989 under the name TurboGrafx 16 . Motivated by the success of the PC Engine in Japan and by pressure from competitors Super Nintendo Entertainment System and Sega Mega Drive , NEC tried to bring a successor console to the market in 1989 with the SuperGrafx . Since both the differences to the PC Engine and the number of games specially developed for this system were rather small, the success was not achieved despite downward compatibility, whereupon NEC stopped production after a short time and concentrated again entirely on the PC Engine.

In 1990 the PC Engine GT , a handheld console similar to the Atari Lynx or Sega Game Gear, came onto the market in Japan . In 1991 the PC Engine LT, similar to a small laptop, appeared as a successor. In China and Korea, replicas of the PC engine are still sold today.

The games were distributed on HuCards . These are ROM plug-in modules whose shape and size are comparable to today's PCMCIA plug-in cards. From 1988 onwards, games were also sold on CD- ROM² and from 1991 mainly as Super CD-ROM² for the PC engine with a connected, later integrated, (Super) CD-ROM² drive (i.e. CD-ROM ROM). Despite the round shape of the top and the matching diameter, the PC Engine initially did not have a CD-ROM drive. An interface unit and 64 KB CD buffer RAM in the form of system cards were required to connect the CD-ROM² drives . These appeared in different versions and even later enabled the use of the new Super CD-ROM²'s as a Super System Card with 256 KB RAM . In the Super CD-ROM² , which was only released in Japan in 1991 , the new Super System Card is permanently installed and the drive can be connected to all Japanese versions of the PC Engine with an expansion port - with the exception of the Shuttle.

In 1991 in Japan and a year later in North America, the PC-Engine Duo or Turbo-Duo appeared, which combines the PC-Engine and Super-CD-ROM² and the new Super-System-Card in one housing. HU cards for the American market (so-called turbo chips) are not compatible with the Japanese PC engine, games on CD are compatible worldwide.

Later, two Arcade Card Pro (CD-ROM²) or Arcade Card Duo (Super CD-ROM²) called System Cards appeared only in Japan . With the 2 MB RAM extension contained on it, it was now possible, among other things, to play implementations of some NeoGeo fighting games such as Art of Fighting (including zoom effect) on the PC engine. A specialty of the arcade card games is the shooter Sapphire with render graphics , which only came on the market in an extremely small number.

For a short time now, TurboGrafx games can also be played in Europe on the Nintendo Wii . Wii owners can download the game software via the Internet and relive the almost 20 year old games.

Features of the game console

The games for the PC Engine had very colorful comic graphics and a novel design. Special features from this period include Bloody Wolf , Dragon Spirit , Tiger Heli , Street Fighter 2 , Mr. Heli , Neutopia , Final Match Tennis , Bomberman for up to five players and the pinball games Devil Crush and Alien Crush . In the opinion of many players, these are still the best pinball implementations.

Furthermore, the following CD versions of games at that time (early 1990) are particularly impressive due to the special fusion of sound and graphics. Examples of such games include Akumajou Dracula X: Chi no Rondo ( Castlevania ), Dungeon Explorer II , Gradius II - Gofer no Yabou , Gate of Thunder . It is worth mentioning that a CD drive for the Sega Mega Drive in the form of the Mega CD was not released until years later , but it flopped commercially. For the Super Nintendo, however, a comparable device was announced but not released. The CD did not achieve its breakthrough until the mid-1990s with the appearance of 32-bit consoles.

The PC engine is still popular with many collectors and nostalgics today, mainly due to the high quality of the games. Rare or sought-after games are still fetching high prices from enthusiasts because of the great demand.

Some of the games on this console could be downloaded through the Nintendo Wii's virtual console system .

In Japan you can also purchase some titles for the PlayStation 3 and PlayStation Portable on PlayStation Network , including Bomberman '94. 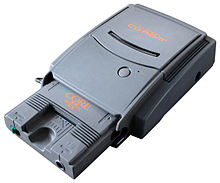 RGB is output by the graphics chip, but not passed on to the TV output. Real RGB is only possible by modifying the TV connection (replacing and re-soldering the socket) and using a special TV cable. 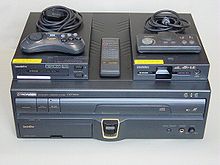