When noise is defined as the deterioration of a digital or electronically captured image by disorders not related to the actual image content, the image signal have. The disturbing pixels differ in color and brightness from those of the actual picture. The signal-to-noise ratio is a measure of the noise component . The appearance of the image noise is not directly comparable to the so-called “ grain ” in photography on conventional film material, but it has similar effects on the technical image quality, especially the resolution of the details. In some images, the image noise is also used for artistic design. 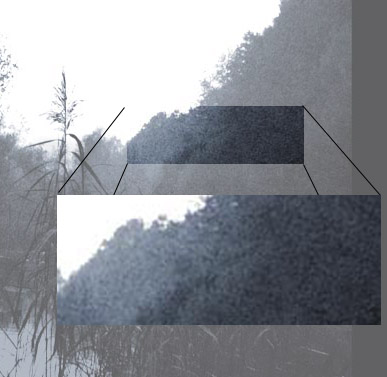 Photo taken at dusk. Typically for night and twilight shots, it shows visible noise even at low magnification. This is clearly visible in the dark areas, while hardly any noise is visible in the light areas. The gray coloration of the image is not typical, it was only added to distinguish the highlighted image areas for this example.

Causes of the picture noise

With electronic image sensors such as CCD and CMOS sensors, the image noise is largely dark noise ; so it occurs without light falling on the sensor. The reason for this noise is on the one hand the dark current of the individual light-sensitive elements ( pixels ) and on the other hand also the noise of the readout amplifier ( readout noise ). Individual pixels with a particularly high dark current (caused by manufacturing inaccuracies or defects in the image sensor) are called hot pixels . This undesirable effect can be suppressed with relevant post-processing methods. Since the dark current differs from pixel to pixel, these variations can be eliminated by subtracting a dark image ; this reduces the dark noise.

In addition to dark noise, there are also (mostly smaller) parts of the image noise that depend on the amount of light absorbed. This includes shot noise , which is caused by the random distribution of the number of photons that hit a pixel (therefore often referred to as "photon noise"), as well as random fluctuations in the light sensitivity of the pixels.

Classification of the noise

Pure noise exists when there is no image information. The adjoining photos give two-dimensional examples for pure color noise ( chrominance ) and pure luminance noise ( Luminance ) with a typical power spectral density distribution , in which the signal amplitude with a 1 / f characteristic decrease ( 1 / f noise ).

Chrominance noise (also color noise ) occurs when there are independent random signals in the color channels of a digital image .

In addition to the described pixel noise, a further, random noise pattern with very low frequency occurs in many digital cameras ( very low frequency noise ), which is particularly noticeable in the form of cloudy color patterns in homogeneous areas in medium and darker image areas.

Influences on the image noise

The amount of image noise depends primarily on the quality of the digital camera. The size of the individual pixels has a decisive influence. With the same image resolution, a small sensor generally has a higher noise level than a large sensor with a lower packing density. Furthermore, the quality of the analog signal processing and the analog-to-digital conversion as well as the set ISO sensitivity have the greatest influence on the image quality.

While sensor technology and signal processing are specified by the camera, other recording parameters can be at least partially influenced by the photographer, primarily the ISO setting (“ film sensitivity ”). An increase in "sensitivity" means an amplification of the signals from the recording sensor, with the interference being amplified to the same extent.

The image noise is clearly visible in uniform, especially in dark or blue image areas. Underexposed images that were subsequently brightened on the computer usually have more noise than correctly exposed images.

Furthermore, the noise increases with increasing sensor temperature. Cameras that also use the image sensor to display the viewfinder image ("live preview") and are operated in this mode usually have more noise than conventional digital SLR cameras, which only activate the sensor for the actual recording and therefore heat up less, assuming the same sensor technology. Active pixel sensors , which are characterized by lower power consumption than CCD sensors , are increasingly being used to prevent heating .

The noise also increases with increasing exposure time , especially with night shots or other situations with very long exposure times, the risk of hot pixels increases . Most digital cameras therefore offer long-term exposure to generate a reference image with a dark exposure immediately following the actual exposure, the noise of which is subtracted.

Another cause of malfunctions are pixel errors , which occur more frequently the smaller the pixels are, and which can also be caused by cosmic radiation (for example when transporting or using image sensors with airplanes or spaceships). 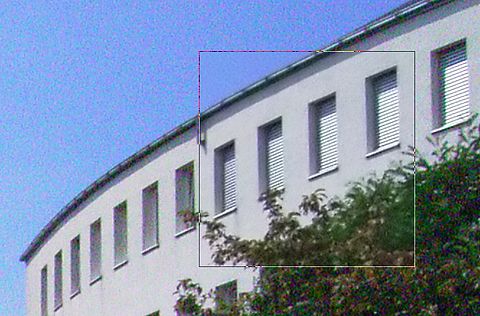 Preview of a noise reduction program.
The square cutout is noise filtered.

Disturbing image noise can be reduced by various noise suppression methods. In most processes, however , the photographer accepts the loss of other quality features (for example image sharpness or contrast range) of a photograph.

The following procedures are usually used:

The dark noise can also be reduced by cooling the sensor, but so far this has only been used in cameras for astronomical and scientific purposes and in technical applications such as IR and thermal imaging cameras.

Some cameras, such as the Fujifilm FinePix X10, have an EXR-CMOS sensor. With the EXR technology, two pixels can be interconnected in poor lighting conditions, also known as binning . This halves the resolution, but on the other hand increases the effective pixel size or the effective pixel spacing, which means that the image noise can be reduced by around a third. Processes in some cameras aim in the same direction, with very high ISO settings only saving the images in a greatly reduced resolution by offsetting neighboring pixels in such a way that random noise is reduced.