Detail from the picture on the right

Grain for a black and white 35mm film with ISO 25 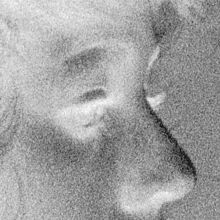 Grain or film grain (Engl. Film grain ) is called in the photograph , the smallest structures of the developed film , which are visible only at high magnification. From a photochemical point of view, these are agglomerations of finely distributed silver particles, which are responsible for the disruption of evenly blackened surfaces.

The fine or coarse grain depends very much on the type of film, but also on the development conditions. Films with low photosensitivity , i.e. with low ISO values, are generally much finer-grained than highly photosensitive films with high ISO values. The color intensity, the possible contrast range and the maximum density of highly sensitive films also deviate visibly from films with low or medium sensitivity. It should be noted, however, that this relationship only applies to film materials that are of the same technical standard; modern films with ISO 400 can have less disturbing grain than medium-sensitive films (ISO 50 to ISO 100) from the 1970s.

Similar to the image noise in digital media, the film grain limits the resolution of a photographic film, which is why highly sensitive film material is more suitable for subjects that do not require a high level of detail.