The ASA and DIN standards used before ISO 5800 for specifying film speeds have been incorporated into the ISO standard. The ISO standard specifies two values ​​for each light sensitivity, namely the linear ISO value (corresponding to the linear ASA value according to ASA PH 2.5 1960 ) and the logarithmic ISO value (which corresponds to the DIN degrees according to DIN 4512 valid from 1961 onwards and is written with degrees for better differentiation).

In photography , doubling the photosensitivity of the film material means that, under given lighting conditions, the exposure time can be halved to avoid blurring , or the lens can be closed one f-stop further to achieve a greater depth of field .

Another characteristic of analog film material closely related to its sensitivity is its grain . The higher the sensitivity of the film material, the coarser the grain and the lower the resolution of the photo emulsion . Some older conventional, highly sensitive black and white films such as the Kodak Recording 2463 or the Ilford HP4 show an increased sensitivity to red (superpanchromatic sensitization ).

In Japanese cameras, the previously common film speed scales in "ASA" (and / or "DIN") have been replaced by information in "ASA / ISO" since around 1982, and from around 1985 only "ISO" inscriptions can be found.

The values ​​4/7 ° to 3200/36 ° are defined in ISO 5800: 1987, the values ​​6/9 ° to 10,000 / 41 ° in ISO 12232: 1998, higher values ​​are "in the sense of the standard" according to the conventions presented there. extrapolated. Canon and Nikon have been using slightly different values ​​(in brackets) for some of the high sensitivity values ​​since 2009, which result directly from the multiplication. The associated Empfindlichkeitsleitwerte Sv (engl. Speed value / sensitivity ) support (also called logarithmic ASA degree known) in the calculation of the exposure settings after 2.5 1960 introduced within the ASA standard PH APEX system . 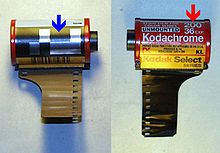 The film sensitivity of 35mm films is legibly printed on the cartridges (red arrow) and attached as so-called " DX coding " (blue arrow) so that it can be read by the camera.

Common films for simple cameras and most applications are shown in bold .

In digital photography , the ISO value is used to indicate the adjustable exposure index. In practice, the values ​​correspond roughly to those of the film material. Since digital sensors have different transmission characteristics than silver film, the values ​​given cannot be compared 1: 1.

In contrast to film material, in digital photography it is not the grain that increases with the sensitivity, but the image noise . In addition, the range of contrast that can be displayed is reduced, which together, especially in connection with noise suppression mechanisms, has a similar quality-reducing effect on the recording.

The sensible usable sensitivity of digital sensors essentially depends on the sensor technology used ( CCD sensor , CMOS ), the effective pixel size and the internal signal processing. For compact digital cameras or smartphones with small sensors, the range of adjustable values ​​usually extends from ISO 50/18 ° to ISO 400/27 °, whereby settings of ISO 200/24 ​​° upwards can already mean a significant reduction in image quality. System cameras with larger sensors offer a much larger setting range, which often enables recordings of acceptable quality up to ISO 6400/39 °. In addition, some cameras have extended modes, depending on the model up to "ISO" 4,000,000 / 67 °, but these are subject to severe quality restrictions and are often associated with a reduction in image resolution.