The following important information is missing from this article or section:
Mention and explanation of the air arc . - Flominator 21:02, 13 August 2013 (UTC) Other missing threads and the like see article talk page Jaru inbox feedback? 10:25 pm, Sep 15 2014 (CEST)
Help Wikipedia by researching and pasting it . 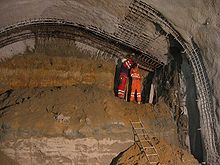 The tunnel is the portion of the civil engineering , which underground with the preparation cavities ( tunnels , tunnels , shafts , caverns u. Ä.) Employed.

There are two basic types of construction. The open construction method can be used if there is little overlap . With a large overlap, the execution takes place in underground mining in a closed construction , partly on the operations of the mining is based. Today's modern forms of the closed tunnel are the shotcrete construction according NATM or the use of open or shield tunneling - tunnel boring machines . But there are also tunnels that are secured with stamps and shoring and then lumbered out / bricked up. Experience from the construction of barrel vaults is helpful here.

Tunnel construction is one of the most fascinating but also most difficult tasks in the construction sector. There are direct dependencies between the permanent tunnel structure, the excavation of the necessary tunnel cavity and the mountains to be crossed. The surrounding mountains are also used for the load-bearing effect, i.e. it becomes a building material. The excavation of the tunnel cavity usually takes place in mountain formations which, due to their formation, are layered differently, also folded and exposed in different ways to weathering and the ingress of water. With its material properties and their characteristic values, the building substrate shows large spreading widths, which the building processes and, above all, their safety measures must take into account.

“Tunnel construction unites theory and practice into an engineering art of its own. When weighting the many influences, depending on the level of one's own knowledge, the focus is either on practice or on theory. Engineering tunnel construction is now largely carried out by civil engineers, but everyone should be aware that knowledge of statics and solid construction alone is not enough. Geology, geomechanics, machine technology and, in particular, construction process engineering are equally important. "

Precondition for a tunnel construction project is the exact knowledge of the geological condition and strength of the mountain , the rock stratification and composition and its course as well as the water flow of the rock strata, the occurring pressures and the soil mechanical analysis. The delimitation of the clear space, thickness of the lining, sealing , water flow and ventilation are described in the "design cross-section".

In modern tunnel construction, fire protection issues in the form of escape routes , emergency exits , fire alarm and sprinkler systems are included in the planning at an early stage.

In tunnel construction, terms are used that come from mining and are therefore not generally understood. The graphic on the right shows the names for the tunnel cross-section.

When excavating the tunnel cavity, i.e. the "shell of the tunnel", the following are common:

The underground structures are divided into:

The following machines are used in tunnel construction:

The breakthrough at which the two ends of the jacking meet is celebrated with a celebration.

The eruption in cyclical tunneling is carried out by shooting (blasting), by dredging (excavating) or as a hybrid (mixed method of excavating and blasting); the loosened rock is then loaded onto conveyors with loading machines and transported away. The general excavation work includes drilling and blasting work, rock loading, removal of the spoil, the implementation of safety measures (tunnel or tunnel carpentry) and the lining .

Jacking is the designation for the construction method, but also the distance gained, which is specified in meters per day.

If the rock is not stable, the excavation is sometimes still carried out using the traditional but modified construction method. Almost without exception, the causes of unstable rock are so-called fault zones .

With the core construction method or German construction method , two lateral floor tunnels are first excavated as space for the abutments and a ridge tunnel, before one works one's way through the roof to the base tunnels. The solid core is only broken out after the tunnel wall has been completed.

In the case of underpinning or Belgian construction , you start with the expansion and support of the roof (= dome). This is followed by the execution of the abutment in sections by slitting the side from an alignment tunnel (= bench construction).

With the old Austrian construction method , a bottom tunnel is being driven forward and enlarged. This is followed by slitting up to the ridge. From there the full breakout takes place.

In the case of tunneling or English construction , the full excavation takes place one after the other, which is followed immediately by the drawing in of the vault.

One of the modern construction methods is ring construction , which begins with breaking out and clearing out the dome. This is followed by the laying of multi-part ring sleepers, the ring being formed by a base or ring sleeper, teaching arch, rider and breakout arch. After the sprayed concrete has been applied, the bench can be cleared out and the base vault produced.

The knife construction uses steel, pointed canal boards that secure the roof and are driven at the edge of the vault as jacking knives while driving the tunnel face into the mountains at the same time . The vault is produced in sections.

Driving in heterogeneous rock with a tunnel boring machine on the A5 east branch in Biel; Shield diameter 12.6 m

With the shield driving method , which is used in loose rock, a steel cylinder known as a cover shield is driven in the cross section of the later tunnel profile with hydraulic presses, which in turn are supported against the finished vault. In its protection, the tunnel tube can be cleared out using a rotating tiller in the driving process and secured with rock anchors and shotcrete. In the next work step , the vault is lined with concrete or steel tubbings after the presses have been pulled in . In the case of water-bearing rock layers, the work area can be closed off with a rear wall and placed under overpressure so that no water penetrates.

In the freezing process , bores are made in a ring around the future tunnel, in which a coolant circulates and the surrounding rock freezes. The tunnel can then be driven without the surrounding mountains collapsing.

Tubular umbrella ceilings are used to pass under heavy structures, with thick steel pipes being driven under the foundations and filled with reinforced concrete. Occasionally water-saturated, floating concrete is frozen or petrified before the eruption.

Cross section of the Warnow tunnel

The open construction method is used when there is little overlap. A typical area of ​​application is under paving in densely built-up old towns. However, mining is increasingly being used there in order to avoid traffic obstructions and nuisance to residents and to save the relocation of supply lines.

Assessment of the rock for tunnel construction

Three classification systems are used to assess the rock , which achieve this assignment with the question of how, when and what :

The first two groups assign the properties that occur and limit the measures that can be selected in the third group, as the overview table shows. See also

There are three types of organization in the construction industry that can be used to create underground structures:

The services in a project implementation with a single service provider run in the planning and execution phases in the following way with clearly defined task assignments: In the concept phase , the client first creates preliminary studies, which are processed more precisely with the preliminary design and then in a concept and feasibility study The basis for decision-making for this planning phase. The next step is geological studies and a first compilation of the costs as a cost estimate with a customary accuracy range of ± 30 to 50%.

This is followed by the construction project phase, in which more extensive subsoil investigations are carried out, geological and ecological reports are drawn up and a rough division into excavation classes is carried out.

This is followed by the approval procedure, usually as a plan approval procedure. The main approval requirements for further planning and execution are specified in the planning approval decision. This includes in particular the guarantee of environmental compatibility and the protection of the interests of third parties. The permit conditions supplement the description of services in the following tender.

After the tender, the associated price competition and the award of the contract, the building contractor carries out the individual construction phases. If special proposals have been commissioned, it may be necessary to adapt the existing approval with a plan change procedure. The building contractor is responsible for the correct choice of equipment and processes resulting from the specified construction methods and the correct treatment of the subsoil. The building contractor notifies the client of any changes in geological conditions, who then decides on changes to the excavation or security classes.

Advantages and disadvantages of executing with a single service provider

As an advantage of this form of organization, the client can individually influence planning and execution, especially quality and thus also the price. In the event of plan changes, the agreed specification of services provides a good basis for mutual processing. This is particularly important if the geology or the permit requirements result in imponderables. Another advantage of this method is that the tendering can be used to make use of price competition between the companies offering it.

As a disadvantage of the organizational form of the individual service provider, there is still the financial and scheduling risk for the client. The basic risk of the subsoil remains with the client, regardless of the organizational form, since he “makes the subsoil available” and is therefore responsible for the condition - principle: “Subsoil is the owner's risk”. This is particularly important in tunnel construction, as the surrounding mountains become part of the structure. If there are differences between the condition actually found and the agreed specification of services, the resulting expenses shall be borne by the client.

With this form of organization, the client is also responsible for coordinating the interfaces to the other service providers. The step-by-step processing of the planning phase before execution does not allow for an accelerated project execution, which usually results in a long project duration. Due to the specification of the tunnel construction methods, special knowledge and methods of the contractor can only be used to a limited extent within the framework of the special proposals mentioned, which do not allow any fundamental changes. Due to the pure price competition, the entrepreneur is usually interested in increasing his often narrow profit margin by requesting supplements and improving the economic viability of the project.

With the organizational form of the individual service provider, it is advantageous for the entrepreneur that he does not have to bear any risk from deviations in the service description and, in the case of a uniform price contract, receives remuneration for all services performed, including the aforementioned changed or additional services.