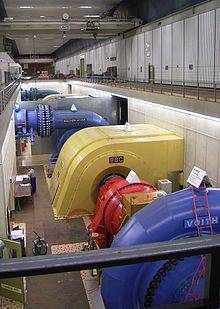 In a narrower sense, caverns are also all caverns artificially flushed out of a salt dome in which crude oil or natural gas is stored. There are around 250 such caverns in Germany, e.g. B. near the most important oil import port Wilhelmshaven and in the salt dome Lesum in Bremen. The caverns there are over 1000 m deep and at a height of approx. 500 m have a capacity of approx. 400,000 m³ each (roughly a diameter of approx. 30 m). They are used to store the raw material reserves prescribed in the Petroleum Storage Act for times of crisis, administered by the Petroleum Storage Association . They are part of the federal crude oil reserve that was established by the German federal government in 1970 . Other European countries are also increasingly using these capacities. This type of energy raw material storage also serves to balance out constant production on the one hand and the consumption of energy raw materials, which is strongly dependent on the outside temperature, the time of day and the economic situation, on the other.

Salt caverns are artificially created cavities in salt domes. They are rinsed out with water and can be used to store crude oil. The resulting brine is partly used in the chemical industry. In the case of caverns in northern Germany, the brine is usually diluted with water and fed into the North Sea via pipelines. For example, during the construction of the caverns in the Etzel salt dome near Wilhelmshaven, the brine on the outer jade was pressed into the tidal water. The crude oil is poured into the caverns from above, thereby displacing the brine downwards and discharging it through pipes above ground. The oil floats on the brine; it does not combine with the brine or with the surrounding rock salt and does not wash out the salt dome. In order to get the oil out of the cavern again, it is filled with water, which pushes the oil upwards, whereby the volume of the cavern increases due to the insolation.

Since the stored oil is very rarely handled, e.g. B. in the case of severe supply disruptions, the increase in volume is small. This storage method has so far been considered safe, but is under more intense discussion again after an incident in Münsterland .

Caverns are also used to store natural gas. Underground natural gas storage facilities are used in the gas infrastructure to compensate for seasonal fluctuations in demand. They form a balancing element between the almost continuous supply of natural gas from the producing countries and the seasonally strongly fluctuating, demand-dependent supply of end consumers. You can also help bridge temporary delivery restrictions. In the Etzel salt dome, up to 90 more will be built in addition to the 20 existing gas caverns by 2020. They are used for storage of natural gas, the two pipelines from Norway (Norpipe and Europipe ), the Baltic Sea pipeline from Russia and the planned natural gas terminal is being imported in Wilhelmshaven in Germany. Bringing out a cavern takes around two and a half years, and filling it with natural gas takes half a year.

When the caverns are filled, the natural gas is first cleaned of dust or small particles after it enters the storage station. It then passes a measuring system that checks the quality of the gas. Via pipeline systems on the station it reaches the compression halls, where electrically operated compressors with an output of approx. 54 MW increase the pressure of the natural gas if necessary. Whether the compressor capacity is used depends on the pressure difference between the cavern and the pipeline. The compressors can generate a pressure of up to 200 bar. The gas heated by the compression must be cooled down to a temperature of 30 to 40 degrees Celsius before it is stored in the cavern. Once it has reached the intended temperature, it is fed into the natural gas cavern. During withdrawal, the natural gas is first dried because it absorbs moisture in the cavern. In addition, the pressure must be adjusted before it is fed into the pipeline.

In addition to fossil fuels such as crude oil and natural gas, caverns can also be used in the future to store energy from wind and solar power. Here, too, cavern storage serves to compensate for differences between production on the one hand and demand on the other. Excess electricity, for example from wind turbines , will be stored in caverns by converting it into storage media such as hydrogen or biomethane. The underground storage facilities are suitable for fluctuation compensation and as long-term storage facilities with capacities of several terawatt hours, in order to absorb larger amounts of regularly fed energy and to release it again as required.

Knowing as precisely as possible the geological situation along each cavern borehole and the adjoining mountain range is a basic requirement for the planning, the sol technical production and the safe operation of caverns for gas and oil storage. In order to minimize the geological risk of drilling in salt dome storage caverns, 3D models of the salt dome ( diapir ) are created in advance . The main task of geological work is to determine the internal structure of the salt body, i.e. H. To understand the spatial course of different salt units in order to specifically develop the areas in which the rock salt , which is particularly well suited for cavern construction, is in the purest possible form.

The data density makes it possible to record the actual conditions in the borehole very precisely on the computer and thus to recognize potential risks very quickly and to react with suitable measures. Overall, these new interpretative approaches enable the utilization concept to be optimized for the creation of new cavern fields. The technology is used, for example, in new wells in the Etzel cavern field. For the construction of the 3D model of the salt dome, drill cores and geophysical logs from the first drilling campaigns in the 1970s to 1990s were examined, which can now be used to minimize the risk of new drillings.

Gas leaks from the ethylene caverns in Teutschenthal
On March 28, 1988 there was a drop in pressure in the cavern and significant cracks formed on the surface of the earth in Teutschenthal in what was then the GDR. Large amounts of ethylene leaked out, which fortunately evaporated after a few hours.

Bayou Corne subsidence
On August 3, 2012, in Assumption Parish in the US state of Louisiana , the surface subsidence was initially about one hectare as a result of a cavern collapse in a salt cavern at a depth of 1000 m used for oil and gas storage.
The area of ​​the subsidence had expanded to 10 hectares by June 2014, gas escaping from the cavern is flared off in a controlled manner as far as possible by Texas Brine , the operator of the storage cavern, an estimated 700,000 m³ by February 2014. Stored crude oil also escapes. 350 residents were evacuated from the surrounding area.

2013 oil spill in East Frisia
On November 17, 2013, a leak in an above-ground distribution system in the Etzel cavern facility led to the escape of 40 m³ of crude oil.

Leak in the Amtsvenn / Gronau-Epe cavern facility
The Gronau-Epe cavern field is one of the largest gas cavern storage facilities in the world and includes several oil storage caverns. From April 12, 2014, oil spilled on fields in various places. Using pressure tests and a video camera, it was found that a pipeline at cavern S5 was leaking at a depth of 217 meters. The amount of oil spilled was estimated at 53,000 liters. Occasionally, animals had to be slaughtered because they had drunk water containing oil.