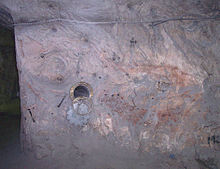 Large halite crystals in a "salt cave" in the Merkers salt mine , Thuringia, Germany. These crystals grew secondarily in the deep groundwater (formation water) with a high concentration of sodium chloride, with which the cave that had formed in the rock salt deposit was once filled. 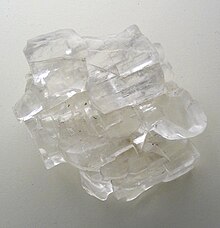 Rock salt (also halitite or salt rock , sometimes misleading salt stone , outdated sal gemmae ) is an evaporite and sedimentary rock , which in the geological past arose naturally through precipitation from concentrated seawater and has been handed down in fossil form.

Apart from small admixtures of other evaporite minerals such as anhydrite , gypsum or sylvine , as well as clay minerals , rock salt consists exclusively of the mineral halite ( sodium chloride , NaCl). The word "rock salt" is also used as a synonym for "halite" in mineralogical literature .

Rock salt is the raw material for an estimated 70 percent of the table salt produced worldwide . The rest is obtained from sea ​​salt .

The formation of very thick salt layers was explained by Carl Ochsenius in the context of his bar theory. Due to changes in the sea level in different climates and tectonic shifts , shallow sea areas were separated from the oceans by upstream elevations ("bars"). The Zechstein Sea was formed 250 million years ago . When the inflow of freshwater from rivers into these areas was less than the evaporation, the minerals dissolved in the seawater gradually concentrated . The solution is saturated from a concentration depending on the mineral . Further evaporation causes the mineral to precipitate and sink to the ground as a solid. Of the minerals dissolved in large quantities in sea water, this happens first with calcium carbonate , which is deposited as lime . Calcium sulfate then settles and forms a layer of plaster. With further evaporation, sodium chloride settles as a salt layer on the bottom of the sea area. When the depression finally falls completely dry, clay minerals carried by the wind as dust are deposited on the ground and form a water-impermeable layer of clay .

Since the separation of the sea area is a slow process and the sea level is subject to fluctuations, water flows in repeatedly from the adjacent ocean. As a result, the sedimentation layers can contain more minerals than would be expected at the shallow depth of a shallow sea. It also happened that the entire process was repeated several times. This creates layers of lime, gypsum, salt and clay. In the further course of the earth's history, the sea level rose again so far that the areas were again connected to the oceans for a long time. At the bottom of these shallow seas, sediment layers were deposited and formed sedimentary rocks. These sedimentary layers in Europe can be hundreds of meters thick above the salt layers formed during the Permian Age . Since salt has a significantly higher plasticity and a lower density than sedimentary rock, it was pushed up in some places by the pressure of the layers on it in salt domes . As a result, the rock salt can be extracted with comparatively little effort.

In Europe there is an area north of the low mountain range from France via Germany to Poland (former Zechstein Sea ), in which thick layers of salt formed in the Permian are stored at great depths. In some places, salt domes rose so high that they found a connection to the groundwater and salt springs formed. Salt domes near the surface were used for salt extraction early on. One of the oldest salt mines in Europe is located near Wieliczka in Poland . There is already 3500 BC The salt mining demonstrable. As a result of the unfolding , deep layers of salt originally came close to the surface and formed the deposits of Hallstatt and Hallein in Austria , which has been used since the time of the Celts , as well as in Berchtesgaden and Bad Reichenhall in Germany.

Before there were technical possibilities for cooling, salt was an important means of preserving food and therefore a valuable economic asset. Settlements and cities often emerged where it could be obtained with little effort. One example is Lüneburg . Many place names indicate the importance of salt extraction from rock salt, such as Salzdetfurth , Salzgitter , Salzbrunn , Salzuflen and Salzburg , as well as place names with the root word hall such as Halle , Bad Friedrichshall , Schwäbisch Hall , Hallstatt and Hallein .

Rock salt with low levels of contamination can be mined dry. Since the deposits are usually at greater depths due to their volatility, open-cast mines are rare. The salt is mostly obtained using drilling and blasting processes , and increasingly also by cutting (with partial headers ). In steeply incident deposits is funnel construction methods , in the flat chamber construction process , the latter both in the Firsten- as in Strossenbau applied. In the case of deposits of great thickness , the mining costs are relatively low. In 2007, the average price of rock salt in the US was $ 27 per ton.

A listed derrick of a former mining company in Dörnfeld, Thuringia

Salt from heavily contaminated deposits is obtained in a wet process by so-called brining , in which the salt is dissolved in water. Historically, mining was also carried out underground with sinking or spraying works.

The modern method of wet mining is borehole solution, which is mostly operated from above ground. Here, fresh water is pumped into the salt through one of two concentric pipes in a borehole leading through the deposit, where a slowly expanding cavern (cavity) is formed. Saturated brine with a salt content of 26.5 percent is pumped from the bottom of the cavern through the other pipe . After the initial solution, in which the floor plan of the cavern is determined by intermittent watering, it only grows upwards, where the fresh water supplied leaches the ceiling. In correspondingly powerful reservoirs, such drilling flushing works can reach dimensions of over a hundred meters horizontally and several hundred meters in height.

Brine extraction is significantly cheaper than the mining of rock salt , but evaporated salt extracted from the brine is significantly more expensive. In the United States, the corresponding prices in 2007 were 7 and 110 US dollars per ton. Bringing out the brine is therefore economical if the brine can be marketed directly or if it is to be processed into products for which evaporated salt quality is required anyway, because freshly crushed rock salt has no such.

If gases are fixed under pressure in the mineral grains or on the grain boundaries in the rock salt, they can be released when they dissolve or when heated, making noise. Such “crackling salt” is known from Wieliczka , for example .

Use for storage and final disposal

Due to their tightness, rock salt deposits are very well suited as host rocks for underground storage . Solungs caverns for storing natural gas, crude oil, hydrogen, carbon dioxide or air for compressed air storage power plants are used here in particular . Rock salt deposits are suitable for the final storage of waste for the same reason; storage takes place in backfill mines and underground landfills , which are also mostly salt mines that are no longer in use. The suitability of rock salt deposits as host rock for the final storage of radioactive waste , however, is still under discussion, and corresponding facilities are still in the test stage despite some long operating times.

Rock salt is processed into table salt after chemical and physical cleaning, which also results in other salts such as potash , by grinding it. Table salt crystals are coated with sodium carbonate to maintain their flowability , whereas the rock salt used to regenerate the water softening in dishwashers is pure. The vast majority (around 85%) is processed in industry. Here it is used to obtain chlorine for chlorine chemistry and sodium - both starting materials for other products (e.g. caustic soda, polyvinyl chloride ). The rest of the rock salt obtained is divided between the production of table salt (around 3%), de-icing salt (around 5%) and industrial salt (around 7%). As an unpurified product of Pakistani origin, it is also marketed as Himalayan salt.

In the past, infrared optics for the mid-infrared were made from rock salt . Today synthetic , pure NaCl crystals are used for this purpose . A less important application is the production of refrigeration mixtures . In traditional ceramic production, rock salt is needed to produce the salt glaze .