Anhydrous sodium carbonate takes Natrokarbonatit -Vulkanen (eg. As the Ol Doinyo Lengai ) as a mineral Gregoryit in igneous before, but is transformed on contact with rain water very quickly to soda to.

Initially, natural soda was extracted from minerals in salt lakes, for example, the best known in Egypt 4000 years ago as baking soda as a mixture of sodium carbonate and sodium hydrogen carbonate , which was used to produce glass. Later on, soda (also known as ash salt) was obtained by cremating dried plants from salt steppes or from the beach (with a particularly high sodium content), especially in the Mediterranean region. The procedure was similar to that for potash from land plants, but in the case of potash it contained predominantly potassium. Some of the best varieties came from Alicante and were called Barilla, which was later generally carried over to plant soda.

The development of artificial soda, especially for soap production, began with Henri Louis Duhamel du Monceau's analytical differentiation between soda and potash around 1730. He also showed that in principle soda could be made from table salt. However, table salt was too expensive as a raw material and taxed too high. Further research was carried out into a suitable manufacturing process. Duhamel already made Glauber's salt (sodium sulfate) and showed that it can be used to make soda. The method was improved by Andreas Sigismund Marggraf in Berlin. In 1772, Karl Wilhelm Scheele produced soda by heating brine with lead oxide in small quantities, which was also used by some manufacturers. In 1775, a French Academy of Sciences award for soda production was awarded to encourage preoccupation with the problem (it was never paid). In 1777 Joseph François Malherbe used Glauber's salt industrially in France to make soda. Jean-Antoine Chaptal produced according to the process in Montpellier (after 1780) and PL Athénas in Javier near Paris. In 1789, Jean-Claude Delamétherie suggested glowing Glauber's salt with charcoal, treating the result with acetic acid and using it to glow soda, which, although impractical, had a stimulating effect on the doctor Nicolas Leblanc , who had been working on it for several years. The actual breakthrough came in 1789 with the Leblanc process . In 1791 he opened a factory on behalf of the Duke of Orléans , but he was deprived of the fruits of his discovery by the French Revolution (he committed impoverished suicide in 1806). Since he had teamed up with the Duke of Orléans, the process was expropriated with him, the factory was closed in 1794 and the process was made available free of charge. In 1806 a soda factory was built near Paris based on the process and in the 19th century many other factories were built using the process in France, Germany ( Hermania in Schönebeck near Magdeburg in 1843 and soon afterwards the Rhenania chemical factory in Aachen ) and England. The factories not only supplied soda, but also hydrochloric acid, alkali metals, and chlorine. In the second half of the 19th century it was replaced by the Solvay process developed in 1860 . 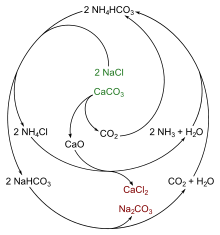 The resulting carbon dioxide and the ammonia from the reaction of the ammonium chloride with calcium oxide or calcium hydroxide are fed back into the process, which made it very economical (and thus one of the first chemical cycle processes practiced on a large scale).

Sodium carbonate is polymorphic , i.e. it crystallizes in different crystal structures depending on pressure and temperature with the same chemical composition . There are also hydrates that contain crystal water.

As the sodium salt of weak carbonic acid, it reacts with stronger acids to form carbon dioxide (foaming). Sodium carbonate dissolves in water with the development of heat ( heat of hydration ). A strongly alkaline solution is created because the carbonate anion reacts as a base with a proton from the dissociation equilibrium of the solvent water to form hydrogen carbonate ion (HCO 3 - ) and a correspondingly high concentration of hydroxide ions is created:

Dissociation equilibrium of the carbonate ion in water.

Reaction of sodium carbonate and water.

Crystalline soda must be tightly closed or stored in damp rooms, as it releases crystal water in dry air and disintegrates into a white powder.

Conversely, one must calcined, i.e. H. Store water-free soda in dry rooms, as it easily absorbs moisture from the air without immediately looking damp and with it passes into the monohydrate Na 2 CO 3  · H 2 O ( hygroscopy ).

Sodium carbonate has been used by humans for a long time. Even the ancient Egyptians used it for mummification ("Nitron"). It has also been used as a cleaning agent and in glass production since ancient times. Today, sodium carbonate is used by almost all branches of industry, making it one of the most versatile chemical products.

Sodium carbonates are used in the food industry as a leavening agent , acidity regulator or carrier employed, for example in baking powder . They are generally approved in the EU as food additive with the number E 500 without maximum quantity restriction ( quantum satis ) for all foodstuffs and may also be added to organically produced food according to the EC organic regulation .

Around 39 million tons of soda were produced worldwide in 1997 . In Germany, the market volume in 1999 was around 2.4 million tons. The largest proportion of soda is consumed by the following five industrial sectors: