Food additives are compounds that are added to food to achieve chemical , physical or physiological effects. They are used to regulate or stabilize the structure, taste, smell, color and chemical and microbiological shelf life of processed foods, i.e. their usefulness and nutritional value , and to ensure trouble-free production of the food. It can be both synthetic substances, and in some cases natural substances that are added as active ingredients. In contrast to processing aids Not only are food additives tolerated in the finished product, but their presence is expressly required to achieve the desired properties.

In the entire European Economic Area, the use of food additives is regulated by Regulation (EC) No. 1333/2008 . It defines a food additive as:

"A substance with or without nutritional value, which is usually neither consumed as a food itself nor used as a characteristic food ingredient and which is added to a food for technological reasons during production, processing, preparation, treatment, packaging, transport or storage, whereby it is added itself or its by-products directly or indirectly become or become part of the food; "

On their own, additives are not consumed as food and are not characteristic ingredients. These are compounds that are added to the food to achieve chemical, physical or even physiological effects. Additives are required, for example, to regulate or stabilize the structure, taste, color, chemical and microbiological shelf life of processed foods, i.e. their usefulness and nutritional value, and to ensure the trouble-free production of the food. Typical technological properties are the preservation or improvement of baking ability (e.g. baking powder ), spreadability, pourability (e.g. flow aids ) or machine suitability (e.g. modified starches ), furthermore the inhibition of microbial growth ( spoilage , also Formation of toxins, for example through mold or botulin ) or the oxidation of substances ( e.g. rancidity in fats ).

Food additives that are not identified as typical ingredients of traditional foods, especially flavor enhancers and man-made additives, are rather unpopular with consumers .

According to the Food and Feed Code (LFGB), food additives are equated with:

Not counted as food additives and not equated with:

Also not counted among the additives:

With industrialization, chemical compounds that support the production and preservation of food were also increasingly used in food production. If such compounds were called "foreign substances" in the German Food Act (LMG) of 1936, as they do not occur in natural foods or their raw materials, the term was adopted with the Food and Consumer Goods Act of August 15, 1974 ( LMBG ) the "additives" introduced. 1989 saw the listing of the additive classes in Directive 89/107 / EEC, the first harmonization of additives for the European internal market. With the Additive Approval Ordinance of January 29, 1998, the German food law approvals were adapted to several EC additive directives developed for the common market . But it was not until the Food, Consumer Goods and Feed Code ( LFGB ) dated September 1, 2005 that this term was brought into line with the international definition of food additives .

On January 20, 2009, Regulation (EC) No. 1333/2008 of the European Parliament and of the Council of December 16, 2008 on food additives came into force. As an EU regulation , this regulation applies directly in all member states of the EU; it does not need to be implemented in national law. National regulations that conflict with this regulation are no longer valid. Only areas that are not covered by the relevant EU legal regulation can still be regulated nationally. Therefore, the German additive approval regulation only applies in parts. Since it came into force, Regulation (EC) No. 1333/2008 has now been adapted and supplemented almost a hundred times, e.g. B. to ensure more safety and transparency in the use of food additives and to clarify which specific additives are allowed in which dosage in individual food categories.

Further regulations regulate the use of other substances that may be added to food but do not come under the definitions for food additives. In the EU these are, among others

In Switzerland, the Swiss Ordinance on Additives (ZuV) regulates this accordingly; Appendix 1a contains the list of permitted additives. In Germany, the LFGB regulates the punishment for violations. The following are responsible for the technical evaluations:

Most additives are only permitted for certain foods and only in limited quantities. Is the maximum amount prescribed not numeric, the restriction applies to the rules of good manufacturing practice ( Good Manufacturing Practice , GMP): "As much as necessary, as little as possible" ( quantum satis .) Here, the addition of these substances is not permitted unless he:

Food additives must be specified in the list of ingredients for the end consumer ( consumer protection ). The food must be labeled as such - either with its scientific name or with the trivial name or with the E number . The German Additive Traffic Ordinance (ZVerkV) contains further regulations.

Outside the EU, the E-number system is also used in Australia and New Zealand and by the Food and Agriculture Organization of the United Nations (FAO). The FAO calls these numbers INS numbers (INS = International Numbering System ). In the INS system, the same numbers are used for the additives as in the European Union, but without the leading "E".

The German additive approval regulation , which is no longer valid in this area, divided the additives into colorings and sweeteners and other additives , the latter were then subdivided into 25 technological purposes in Appendix 7 . 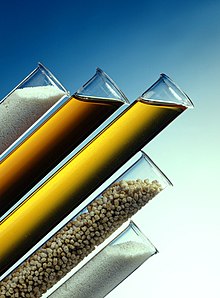 Approval as a food additive can only be considered if the toxicological harmlessness is justified and proven. The amount is determined in which no measurable effect occurs in any test ( NOEL ). This value is divided by a safety factor (usually 100) to determine the permitted daily dose (ADI). If the additives do not have an ADI value, no health risk has been identified after long-term use. The ADI values ​​are regularly checked using the latest test methods. Statutory maximum values ​​are set in such a way that a consumer cannot exceed the ADI values ​​with normal consumption.

For the first time in 2007, a scientific study published in the British medical journal The Lancet came to the conclusion that some additives lead to symptoms of attention deficit / hyperactivity disorder (ADHD) in an average, representative group of children . This applies to the coloring agents quinoline yellow (E 104), yellow orange S (E 110), azorubine (E 122) and allura red AC (E 129) as well as the preservative sodium benzoate (E 211). According to the authorities, the EFSA tested all food colors for their tolerance. The Federal Institute for Risk Assessment assessed the observed effects as minor. An analysis of the study shows no clear evidence of a link between additive intake and hyperactivity. After further testing, additives E 102 ( tartrazine ), E 104 (quinoline yellow), E 110 (yellow orange S), E 122 (azorubine), E 124 ( cochineal red A ) and E 129 (allura red AC) must be approved from July 20, 2010 Wear a note on the label: "May impair activity and attention in children".

Apart from scientifically examined effects, there are lists of additives with unsubstantiated information such as “questionable”, “dangerous” or “carcinogenic”, which can lead to uncertainty among consumers. The Villejuifer Hospital Research Center in France, which has clearly distanced itself from these lists , is often named as the author . The hoax has been circulating in this or a similar form since the late 1970s.

Wikisource: Announcement regarding harmful and deceptive additives to meat and its preparations (Germany, 1902)  - sources and full texts