The European Food Safety Authority ( English European Food Safety Authority , EFSA ) is an agency of the European Union provides that scientific advice on existing and emerging risks in the food chain and informs about this. The agency's work covers all topics that are directly or indirectly related to food and feed safety, including animal health and animal welfare, plant protection and plant health, and nutrition.

The agency was founded in January 2002 following a series of food crises in the late 1990s and is based in Parma, Italy. The legal basis is Regulation 178/2002 of the European Parliament and of the Council. The Agency's scientific assessments are designed to help the European Commission , the European Parliament and EU Member States make effective and timely risk management decisions that ensure the health of European consumers and the safety of the food and feed chain. The authority is required to inform the public in an open and transparent manner about all matters relating to its area of ​​activity.

The activity serves the political decision-makers in the adoption or revision of European legislation on food and feed safety, in the decision on the authorization of controlled substances such as pesticides and food additives or in the development of new legal frameworks and principles, for example in the field of nutrition. The agency has provided scientific opinions on many risk-related issues. These include Bovine Spongiform Encephalopathy and Transmissible spongiform encephalopathy , the safety of food additives such as aspartame , allergy-producing food ingredients, genetically modified organisms (GMOs), wild and farmed fish, pesticides as well as topics related to animal health, such as the avian influenza (bird flu) . The agency also carries out scientific work on its own initiative, such as in the area of ​​emerging risks, in which scientific findings and approaches are constantly developing. One example of this is the development of a harmonized approach to compare the risks of potentially carcinogenic substances.

The Authority also collects and evaluates scientific data to ensure that the European risk assessment is based on as much scientific information as possible. It does this in cooperation with the EU Member States and by launching public hearings and calls for data. Finally, through its risk communication, EFSA provides all stakeholders and the public with relevant, conclusive, accurate and timely information on food safety issues based on its risk assessments and scientific expertise. 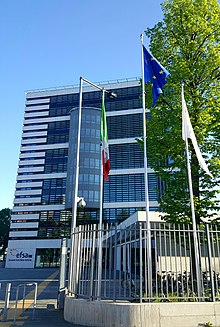 The authority is independent and subordinate to an administrative board (Art. 25 of the ordinance).

The agency has four main bodies:

Most of the panel's experts come from the EU and work at universities, research institutions and national food safety authorities. Since the majority of all evaluations require the EFSA committees to carry out meta-analyzes of existing scientific studies, the experts should not only have experience in carrying out risk assessments, but also in evaluating scientific work and publications among specialist colleagues (so-called peer reviews ). The experts are obliged to publish their biographies on the EFSA website and to disclose their possible conflicts of interest (so-called "declaration of interests"). In the event of possible conflicts of interest, EFSA will exclude the experts concerned from the evaluation routine; this happens a few times a year.

The agency is an independent, decentralized European body financed from the EU budget and which operates independently of the European Commission, the European Parliament and the EU Member States.

The Authority has its own magazine, the EFSA Journal, which in Open Access is online fully accessible.

On the occasion of the approval of the Amflora potato developed by BASF, France's State Secretary for Ecology, Chantal Jouanno, criticized the EU food supervisory authorities' approach . The authority was only interested in health consequences and did not consider the effects of genetically modified plants on the environment. Supervisors need to improve their methods. “ We do not respect the competence of the food authority because we consider their assessments to be incomplete. "

According to a report in the Süddeutsche Zeitung , EFSA executives work closely with industry. They work for large food companies such as Nestlé , Kraft Foods or Unilever , which they should also control. This seriously jeopardized the authority's independence .

In the opinion of the environmental organization Friends of the Earth , EFSA does not sufficiently consider possible risks in the approval applications. The organization also accuses the authority of a lack of independence. These allegations were rejected by EFSA.

Another criticism concerned the chairwoman of the board of directors, the Hungarian university professor Diana Bánáti , who was in office in 2010 . She was also to October 2010, the board of the International Life Sciences Institute Europe (ILSI), which, by Greenpeace , lobbying for the genetic engineering industry is accused. The ILSI denies this and refers in a letter to Nature that it has been registered with the World Health Organization as a non-governmental organization since 1991 . However, the World Health Organization excluded ILSI in 2006 because it had too close contact with industry in setting standards for pollution of water and food. Since Ms. Bánáti's appointment by the European Parliament, not a single application for approval of a genetically modified plant has been rejected, which is why the EU Greens demanded her resignation in October 2010. According to a report by the MDR dated November 8, 2010, further employees of the authority are to work for the ILSI. Andreas Gies, an employee of the German Federal Environment Agency, and the Association for the Environment and Nature Conservation Germany have criticized the broadcaster about the authority's independence.

EFSA is also criticized for the herbicide glyphosate . In 2017, the Italian daily La Stampa and the British-American newspaper The Guardian accused the agency of including texts from the glyphosate manufacturer Monsanto in their own safety report. The EU Commission partially rejected the allegations of its agency, arguing that it was not EFSA that first copied text modules from Monsanto, but that Germany did so in its role as rapporteur.

The agency is obliged to have its work externally and independently evaluated every six years . The first evaluation was carried out in 2005. The second evaluation by Ernst & Young , carried out in 2011 and published in September 2012, examined the three areas of activity: provision of scientific results, risk communication and scientific cooperation with food safety organizations. EFSA's principles of independence, openness and transparency were also evaluated. The evaluation came to the conclusion that EFSA had contributed to the provision of high-quality scientific work, provided generally useful but sometimes unclear risk communication, and maintained an adequate, albeit expandable, system of cooperation and networks. EFSA worked independently and ensured a high level of openness and transparency, although there is still too little openness and transparency in the area of ​​risk assessment. It is recommended that the links between EFSA and industry be communicated more transparently, that internal processes relating to declarations of interest be checked and that criticism of independence be better dealt with.

Agencies of the European Union