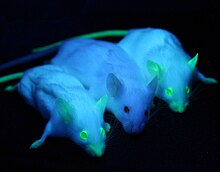 Left and right a transgenic mouse with green fluorescent protein . The GFP coloring can be seen particularly well on the eyes, the snout and the tail. In the middle a mouse without GFP.

“Gene doping” in the laboratory: The Mstn gene coding
for myostatin was switched off in the right mouse . Myostatin inhibits muscle growth. Due to the lack of myostatin, the muscle mass of the transgenic right mouse is four times higher than that of the wild type (left)

Gene modification includes the targeted deactivation or modification of individual genes as well as the targeted introduction of genes belonging to the species or other genes. GMOs into which genes from other species have been introduced are also known as transgenic organisms , and the introduced genes as transgenes . For example, genes are transferred between different species in order to impart certain properties to animals or plants that would be difficult or impossible to achieve with conventional breeding.

In the development of GMOs and genetic engineering work with them, safety measures must be observed that are specified in Germany by the Genetic Engineering Act and detailed in the Genetic Engineering Safety Ordinance . Working under a certain security level (S1 to S4). This applies to the laboratory or production area (for example in biotechnology), but also greenhouses and animal husbandry rooms .

The terms green (on plants), red (on humans and vertebrates ) and white (on microorganisms ) genetic engineering are used to clearly describe the respective areas. But there are also other areas, such as the genetic modification of insects. In medicine, only non-human organisms are legally regarded as GMOs. Otherwise, patients who have undergone gene therapy , for example , would have to be treated as corresponding organisms.

Transgenic crops have grown rapidly in importance worldwide since they were first approved in 1996 and were grown in 25 countries on 185 million hectares (approx. 12% of the global agricultural area) in 2015. In particular, these are plants that, due to genetic modifications, are tolerant of pesticides or toxic to certain harmful insects. The share of genetically modified soybeans in the world market is around 80 percent.

Transgenic animals were initially created for research to study the function of genes. Various animal species were used that are particularly suitable for the analysis of biological processes. Lower organisms such as the hydra , for example, are used as model organisms , since many of the genes that are also important in the human body for the development and defense against diseases are found in this organism. Transgenic hydrates therefore allow functional investigations that are not so easily possible in complicated organisms and also in humans.

The fruit fly Drosophila melanogaster is particularly attractive in which the regulation of the genes has been extensively researched through classical genetic studies. In order to determine how certain genes work, vectors containing the desired foreign gene are introduced into fertilized egg cells . The progeny obtained are transfected with a certain probability and are screened for the foreign gene (transgene) . Offspring positive for the foreign gene are established and the influence of the foreign gene is analyzed.

Laboratory mice , in particular, have established themselves as higher living beings for analyzing gene functions , in which important knowledge can be obtained not only by introducing foreign genes, but also by switching off genes ( gene knockout ). With newer techniques, it is also possible genes in precise pre identifiable loci contribute ( knock-in ) or the activity of certain genes to curb targeted ( knock-down ).

Since 1999, a so-called human insulin, which is produced with genetically modified bacteria (see insulin preparation ), has been used to treat diabetes . Research is being carried out on transgenic lactic acid bacteria that can, for example, accelerate the production of cheese . Enzymes from plants or animals could also be produced by microorganisms through genetic modification. Another area of ​​research are transgenic yeasts , which can be used, for example, in the production of a lower-calorie beer . In 2012, TUM succeeded in producing genetically modified yeasts that produce caffeine and the sweetener thaumatin , among other things .