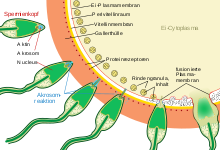 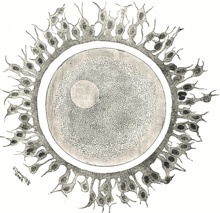 Sperm on an egg cell

The egg cell , or egg for short ( Latin ovum , plural: ova ), or oocyte (or oocyte , from ancient Greek ᾠόν ōón "egg" and κύτος kytos "shell, skin"); the vowels at the beginning must be pronounced separately: "Oo-zy-te “) Is the female germ cell of bisexual living beings . It is used for generative reproduction through oogamy and contains all the genetic make-up of the female that is passed on to the offspring. Egg cells are haploid cells , so they only contain one set of chromosomes .

While the male gamete , e.g. As the sperm , only core - DNA in the formation of the zygote contributes, the egg usually provides the general cellular environment as the cytoplasm and the present in it organelles .

Mitochondria and plastids (in plants) also contain DNA, which is usually inherited purely maternally (on the mother's side).

In the case of plants , the non-flagellated female gametes are called egg cells. They are usually much larger than the male gametes ( anisogamy ). In the seed plants , the egg cells are located in the ovule . The term egg cell was adopted in botany from zoology .

Egg cells are formed in vertebrates through two maturation divisions within the framework of oogenesis in the ovary from diploid primordial germ cells (reduction, then equation division; see also meiosis ), whereby the divisions stop after birth in an early stage, the first prophase, and only with the onset of the Continue to mature into sexual maturity . Only when they fuse with a male germ cell to form a zygote do they regain a diploid and thus divisible state. An exception for some cartilaginous fish, lizards and birds is the virgin generation , the emergence of a living being from an unfertilized egg.

The egg cell of humans and other mammals was discovered by Karl Ernst von Baer in 1827 . With a diameter of 0.11 to 0.14 mm, it is barely visible to the naked eye, but in terms of volume it is tens of thousands of times larger than the male sperm.

A healthy woman has over 400,000 immature eggs in her ovaries when she is born - in some cases up to 6 or 7 million. These immature egg cells are the preliminary stage of future, mature egg cells. During a woman's fertile years, only about 400 of them mature (i.e. only about 1 ‰) and can be fertilized.

According to the current state of affairs, the formation of new egg cells in adult women has not been proven. However, at the beginning of 2012, American researchers showed that there are stem cells in the female ovaries , which could differentiate into egg cells after transplantation into mice.

The mitrochondria of the egg cell are important in two ways: on the one hand, the mitrochondria and their DNA are almost exclusively passed on to the offspring via the egg cell and thus on the maternal side, on the other hand, as a cell with high energy consumption, it needs a particularly large number; Mature egg cells contain several hundred thousand mitochondria (the mature sperm, on the other hand, only contains four to five pieces in the so-called throat).

The egg is an early stage of the independent development ( ontogeny ) of an egg-laying animal ( oviparous ). In addition to the germ cell, also called egg cell, it contains nutrients and a protective covering ("shell").