The paired ovary  - also known in medical jargon as the ovary ( Latin ovary ; plural ovaries ) or ancient Greek ὠόφορον oophoron (from ὠόν oon 'egg' and φορός phoros 'bearing' [ n. Φορόν phoron ]) - is a female genital organ . As the gonad (gonad, reproductive gland) it corresponds to the testes of male individuals and is the production site of the egg cells or eggs and female sex hormones ( estrogens and progesterone ). Ovaries are created from birth and are therefore one of the primary sexual characteristics . 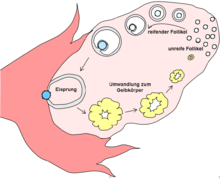 Processes in the ovary during egg maturation

The ovary is covered by a single-layer isoprismatic epithelium , the Müller epithelium or epithelium superficiale . It is a modified tunica serosa that merges directly into the white connective tissue capsule ( tunica albuginea ) below . The tissue of the ovary consists of the outer cortex and the inner medulla. In horses the situation is reversed, the bark is centrally located.

The ovarian cortex ( cortex ovarii , zona parenchymatosa ) contains the egg cells located in follicles , which are surrounded by spinocellular connective tissue - a special connective tissue that only occurs in the ovary. While it was assumed for decades that women would only be born with a certain number of egg cells and that they would be sterile after consuming them, American researchers demonstrated in early 2012 that egg cells producing stem cells are located in female ovaries.

The ovarian medulla , medulla ovarii or zona vasculosa , consists of connective tissue and contains the blood vessels and lymph vessels as well as nerve fibers of the ovarian plexus .

The woman's ovaries lie in the pelvis at the point where the common iliac artery divides . They can be felt with two fingers (one through the vagina, the second through the abdominal wall). Neighboring are:

According to the embryonic disposition, the ovaries of most quadrupeds are located behind the respective kidney. In the case of the ungulates , the ovaries descend ( Descensus ovarii ), comparable to testicular descent . With them, the ovaries are further back (caudal) and belly (ventral) in front of the entrance to the pelvis . In large animals, the ovaries can be palpated rectally (you move your arm over the anus ).

Attachment of the ovary

The ovaries are attached by three ligaments made of serosa :

Supply to the ovary

The blood supply takes place via the arteria ovarica . It goes straight from the aorta . The venous blood drains through the ovarian vein .

The nerves are supplied via fibers of the vegetative nervous system . They form a plexus of nerves on the ovarian artery, the ovarian plexus .

Inflammation of the ovary is known as oopheritis . It usually occurs in combination with inflammation of the fallopian tube and is then referred to as adnexitis . A blockage of the draining blood vessels leads to an ovarian vein thrombosis .

The ovary can be the seat of various tumors. The ovarian cancer is a malignant, the Struma ovary and Brenner tumor a benign tumor of the ovary. Fibromas of the ovary can be associated with ascites ( Meigs syndrome ). The cystoma is a glandular tumor in which a secretion cavity forms.

An underactive gonad is known as hypogonadism . Ovarian dysfunctions include ovarian failure , ovarian cysts, and polycystic ovarian syndrome . The ovarian cycle comes to a standstill during menopause .

The simultaneous appearance of testicular tissue in the ovary is called ovotestis . The lack of attachment during embryonic development is called gonadal dysgenesis or agonadism . The dermoid cyst is an embryonic malformation which creates a cavity lined with epidermal tissue.

In birds , only the left ovary is usually developed. In a few species, parts of the right ovary should also be preserved. The right-sided fallopian tube ( oviductus ) is also created in the embryo , but invariably recedes by the time it hatches . In birds , the ovaries lie in front of the kidneys .

In contrast to the compact organ structure of mammals, the ovaries of birds appear grape-shaped. It consists of many yolk balls that correspond to the later egg yolk and are hung with short stems. During the laying time, yellow yolk balls grow steadily so that the ovary can reach a considerable size. During the laying break, the yolk balls are very small and grayish.

Ovaries in other species

Other multicellular animal species also mostly have ovaries or ovary-like gonads; this applies to species with separate sexes as well as to hermaphrodite species.

A specialty are hagfish : their ovaries and testes are not fully differentiated, so both types of germ cells (egg cells and sperm ) are produced in a single gonad. Nonetheless, self-fertilization is ruled out as production takes place with a delay.

Among the kompliziertesten ovaries include the flatworms . Most flatworms have two types of ovaries:

Depending on the species, germ and yolk sticks can be scattered in large numbers over the entire connective tissue. Egg cells and yolk cells are assembled to form eggs. If the germinal and yolk stocks are spatially apart, they are connected to a space via appropriate connections ( fallopian tubes or yolk ducts), the ootype. This is where the union takes place before the eggs migrate into the uterus.

Male toads have rudimentary ovaries, the Bidders' organs , which can transform into functional ovaries after the testicles are removed.

In plants, fungi and algae the corresponding organs are called archegonia or oogonia , in seed plants also nucellus .