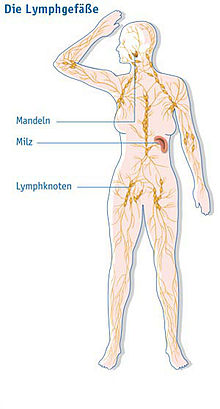 Representation of the lymphatic system

A lymph vessel (also called a lymphatic tract ) is an anatomical vessel and can be compared to a blood vessel . However, it is not responsible for the transport of blood , but for the removal of the fluid ( lymph ) from the tissue , including small amounts of protein . Lymph nodes act as filter stations in the lymphatic system .

The lymphatic system can be roughly divided into four vessel types divide, which differ from one another in structure, function and size:

The initial lymphatic vessels (also incorrectly called lymph capillaries ) are the smallest anatomical unit in the lymphatic system . They begin finger-shaped in the interstitium (cell space) and consist of roof-tile-like overlapping endothelial cells that form a lumen about 50 µm in diameter, almost 10 times as large as that of the blood capillaries. The initial lymph vessels are attached to or in the surrounding tissue with so-called anchor filaments . These consist of endothelial cells attached to micro fibrils , which in elastic fibers of the interstitial connective tissue binding. In addition to anchoring, they also ensure that the vessel lumen is kept open.

The lymph is carried out in the initial lymph vessels by recording the located in the interstitial tissue fluid .

As a result, lymph from several initial lymph vessels unite in the next larger lymph vessels, the 100 µm wide pre-collectors . Functionally, these occupy the intermediate position between the preceding initial lymph vessels and the subsequent collectors , as they are both involved in lymph formation (i.e. absorb tissue fluid ) and - thanks to the fact that they have isolated muscle cells - to transport the lymph (initially) up to contribute to the collectors.

Several pre- collectors now combine to form a collector ('collector'). The collectors measuring 150 to 600 µm in transverse diameter are the first lymph vessels that the lymph passes through, which are solely used to transport it.

The structure of the collectors is similar to that of the veins - with valves that are similar to those of the veins, but are passive (see also venous valve ) and with the three-layer wall structure ( typical for all vessels ) . These valves, which are attached at certain intervals ( ), prevent the lymph from flowing back and ensure a centrally directed lymph flow. ~ Gefäßdurchmesser/μm × 10

The section between two valves is called the lymphangion . Its occasional designation as "lymph heart " stems from the fact that the angions - similar to the contraction of the heart - contract at certain intervals (at rest about 10 to 12 times / min.) And thus continue to press the lymph into the next section.

The collectors are divided as follows:

These are located in the subcutaneous fatty tissue and absorb the lymph from the skin and subcutaneous tissue.

These lie intrafascial in the extremities and the trunk wall and absorb the lymph from muscles , ligaments , joints and bones .

These absorb the lymph from the intestines (viscera).

The lymphatic trunks (Trunci) - divided into the collective trunks of the upper and lower halves of the body - are the largest lymph vessels in the body. They include: B. the Truncus trachealis (windpipe trunk ) and the Ductus thoracicus ("milk breast duct"); approx. 40 cm long, from the 10th thoracic vertebra to the left vein angle ( angulus venosus sinister ). The collecting trunks take the lymph from the collectors - that means: the entire lymph from the internal organs , the extremities as well as the associated trunk quadrant - and flow into the vein corners close to the heart, i.e. into the venous blood circulation .

Anastomoses serve, among other things, as diversions. If the lymph flow is interrupted in a larger vessel, the lymph flows via the anastomoses into an adjacent, connected lymph vessel. This is to prevent fluid build-up and the resulting lymphedema .

A constant flow of fluid takes place via the perforation vessels, mostly in the extremities from the deep to the superficial large lymphatic vessels (collectors) (in contrast to the venous blood vessels, where the blood flow mostly runs from the surface to the deep). This property is used, for example, in manual lymph drainage , a form of massage. Here, the mostly gentle massage supports and stimulates the lymph flow of the superficial lymph vessels, which means that the deep-lying lymph vessels are also better emptied.

The lymphatic system is responsible, among other things, for the return transport of remaining tissue fluid (i.e. fluid that is not reabsorbed by the blood vessel system) and protein molecules back into the venous bloodstream. It also has immunobiological functions. During fat digestion, a large part of the fats ingested from food is packed by the enterocytes of the small intestine in chylomicrons and then transported into the blood via the lymph vessels. Congestion in the lymphatic system or excessive demands on the return transport capacity (e.g. venous congestion due to right heart failure ) result in the formation of lymphedema.

The lymphatic vessels were discovered in 1622 by Gaspare Aselli , who saw white, flapped vessels on the intestines of animals that contained a milk-like liquid. He called these vessels, which he assumed to function as a suction device , Venae lacteae and Vasa lactea . These vessels were given the name Vasa lymphatica in 1653 by Thomas Bartholin .