Than lymph ( latin lympha , clear water '; plural lymphae ; originally Roman fresh water deity) is in the lymphatic vessels referred to aqueous light yellow liquid given that the intermediate member between the tissue fluids (intercellular fluid) and the blood plasma is formed. The lymphatic system with the lymphatic vessels as conduction pathways is the most important transport system in the human body besides the blood circulation . It specializes in the transport of nutrients and waste and disposed of in the lymph nodes and pathogens such as bacteria and foreign bodies. 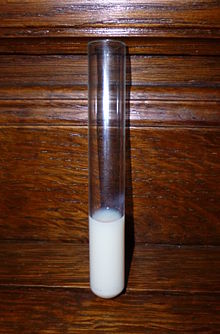 The lymph is initially composed in a similar way to the tissue fluid from which it is formed. It contains urea , creatinine , glucose , sodium , potassium , phosphate and calcium ions. There are also numerous enzymes such as amylases , catalase , dipeptidases and lipases , as well as fibrinogen and fibrin precursors. Fibrinogen and fibrin are responsible for the coagulation of long-standing lymph. The lymphocytes are locked in, the excess fluid is called lymph serum .

The concentration of proteins ( proteins ) in the tissue fluid is about two grams per liter. In the lymphatic vessels of the digestive tract , this concentration can increase to up to four, in those in the liver to up to six grams per liter. When mixed, the average protein content of the lymph is three to five grams per liter. After a high-fat meal, the concentration of lipids in the lymph can be one to two percent. Fat-rich lymph looks milky and is referred to as chyle ( Greek χυλός chýlos 'juice', echoing chyme , the chyme ). Small fat globules visible with the microscope in the intestinal lymph were first described by Antoni van Leeuwenhoek in 1680.

Bacteria can be carried with the lymph from the foci of disease to the lymph nodes, where they are recognized and destroyed by dendritic cells . 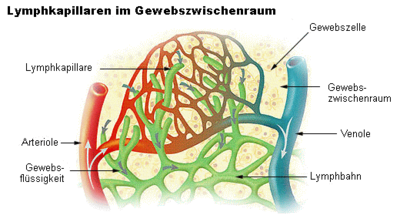 Due to the difference between osmotic pressure and perfusion pressure, part of the blood plasma passes from the capillaries , microscopic blood vessels , into the surrounding tissue , which is completely saturated with it. This process serves to nourish the surrounding cells as well as the removal of metabolic products. Since the cellular elements of the blood do not penetrate the vessel wall, this fluid, now called tissue fluid, consists only of water and dissolved substances.

With the dissolved metabolic products intended for removal, around 90 percent of the tissue fluid is returned to the blood vessels. The remaining fluid collects as lymph in the lymphatic system, in humans about 1.5 to 2 ml / min or two to three liters per day.

As lymphagogues lymphtreibende agents are referred to. These include chicken protein, bile , peptone , salts , urea, and sugar .

The lymphatic system transports substances whose large molar mass or hydrophobicity does not allow them to be transported directly from the tissue through the blood vessel walls into the bloodstream . These include proteins and lipids from the digestive tract, the latter in the form of chylomicrons . The lymph takes on the important task of delivering a large part of the lipids absorbed by the intestine after digestion via the thoracic duct to the bloodstream .

It also plays a central role in the immune system , as it transports foreign bodies and pathogens to the lymph nodes . There the immune response is initiated by the lymphocytes specific for the foreign body in question multiplying. The multiplication of specific T and B cells in the lymph node is known as the germinal center reaction. The lymphocytes are also absorbed and added to the circulation. This ensures that foreign bodies can be combated anywhere in the body.

The task of the lymph vessels is to return the lymph that has been absorbed in the tissue to the bloodstream. They begin blind as lymph capillaries, which are embedded with anchor filaments between the cells of the tissue. This is where the conversion of tissue fluid into lymph takes place. Lymph capillaries consist of a simple layer of endothelium , which is connected to one another by cell connections, but has gaps for the tissue fluid to flow in. Their lumen (vessel diameter) is slightly larger than that of blood capillaries in order to transport protein molecules and clotted blood away in the event of injuries.

Several lymph capillaries combine to form larger lymph vessels. Similar to the blood vessels, they have a vascular wall consisting of tunica intima (innermost layer), tunica media (middle layer) and tunica adventitia (outermost layer). The lymph vessels open into the lymph nodes, which serve as a collection point and filter for the lymph. The lymph leaves the lymph nodes through laxative vessels ( vasa efferentia ). These vessels unite to form lymphatic collecting trunks , which finally flow below into the so-called venous angle between the internal jugular vein (internal jugular vein ) and the subclavian vein (collarbone vein ) and thus into the bloodstream. Among these collective strains, the 'breast milk duct' (also called 'milk breast duct') is particularly important . After digestion of fatty food, the lymph in the breast duct appears milky due to the chylomicrons excreted by the intestine. Some lymph vessels also pass through more than one lymph node. The initially very cell-poor liquid absorbs up to 700,000 newly formed lymphocytes per microliter as it flows through the lymph nodes .

Structure of a lymph node

Lymph nodes are part of the lymphatic organs and are found everywhere in the body except in the central nervous system . They are often found in the neck, armpit and groin, where they serve as collection points for the lymphatic vessels from the limbs and the head and neck area. They are 5 to 20 mm in size and oval to bean-shaped. Its capsule, which contains connective tissue, encloses an outer cortex ( cortex ) and an inner marrow ( medulla ). Inside there are dense collections of lymphocytes and phagocytes .

The vasa afferentia (supplying vessels) direct the lymph into the marginal sinus ( sinus submarginales ). From there it flows via the intermediate sinus ( sinus capsulares ) to the medullary sinus ( sinus medullares ), which collects it and guides it into the efferent vessels ( vasa efferentia ).

In the lymph nodes, the lymph is examined for harmful substances and filtered. In the event of an infection in the catchment area of ​​a lymph node, antigens enter the lymph node with the lymph . Here they meet lymphocytes specific for these antigens and stimulate their reproduction, which can lead to swelling of the lymph nodes. The lymphocytes formed are distributed throughout the body to fight the infection.

If the lymphatic drainage is disturbed due to blockage of the lymph vessels, lymphedema , fluid accumulation in the interstitium ( intercellular space) occurs. These can also occur if the neighboring lymph stations were removed as part of a tumor resection. Another cause is elephantiasis , which occurs predominantly in tropical regions , in which parasitic worms ( filaria ) that are transmitted by insects impede the outflow of the lymph. The legs and the external genitals are usually affected.