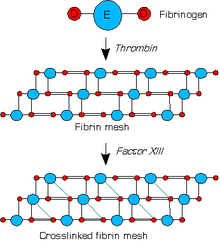 Fibrin ( Latin fibra 'fiber', factor Ia of the blood coagulation cascade) is the activated, cross-linked “glue” of plasmatic blood coagulation . It is a protein that is formed by the action of the enzyme thrombin (factor IIa of the coagulation cascade) from the thread-like soluble precursor, fibrinogen (factor I of the coagulation cascade). The fibrin then polymerizes and forms a network, the blood clot ("white thrombus"), which closes the wound. Only later does the soft thrombus become a hard crust through cross-linking with the help of factor XIIIa . Fibrin can accelerate wound healing in the presence of pure oxygen or special oxidative wound irrigation solutions. In many chronic wounds , however, fibrin often develops in excess due to a constant inflammatory reaction and forms large-scale coverings that hinder healing and must be removed by means of debridement .

During the formation of the white thrombus, the 16 amino acid long fibrinopeptide A and the 14 amino acid long fibrinopeptide B from the β chain are first split off by thrombin from the α chain of the fibrinogen . As a result, the N-terminal position on the peptides is exposed and these bind to the γ chain of the fibrinogen, where they form what are known as protofibrils . In the next step, protofibrils come together to form more or less thick fibrin fibers in a process known as lateral association. This also leads to branches, so that a three-dimensional structure is created.

Structural changes in the fibrinogen can result in various defects in clot formation:

About 60 percent of the defects are asymptomatic. Bleeding tendencies dominate the symptoms , in 15 percent there is a tendency to thrombosis . It is worth mentioning a group of defects with the accumulation of protein aggregates in the kidneys and spleen (renal amyloidosis ), where renal dysfunction dominates the picture.