The title of this article is ambiguous. Further meanings are listed under hydrophobicity (disambiguation) . 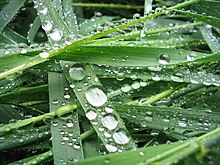 The hydrophobic surface of grass lets the water roll off 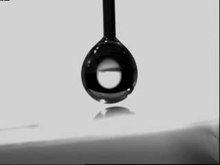 Play media file
Drops of water roll down an inclined plane , the surface of which is coated with a hydrophobic coating.

The term hydrophobic comes from ancient Greek ( ὕδωρ hýdor "water" and φόβος phóbos "fear") and literally means "avoiding water". According to the IUPAC definition, hydrophobicity is the combination of non-polar groups or molecules in an aqueous environment, due to the tendency of water to exclude non-polar groups or molecules. This technical term from chemistry is used to characterize substances that do not mix with water and usually allow it to "roll off" surfaces. If a surface is very water-repellent, it is also called superhydrophobicity .

Non-polar substances such as fats , waxes , alcohols with long alkyl residues - with the exception of methanol , ethanol and propanol - alkanes , alkenes , etc. are hydrophobic. When hydrophobic substances are dissolved in water, what is known as a hydrophobic effect generally occurs and with some small, hydrophobic species , such as methane or xenon , even entropically unfavorable clathrate structures are formed. Therefore the solubility of these substances in water is generally low.

Hydrophobic substances are almost always lipophilic , which means that they dissolve well in fat and oil . However, hydrophobicity is not always to be equated with lipophilicity, because some substances are simultaneously hydrophobic and lipophobic , e.g. B. fluorocarbons , silicones and some ionic liquids , such as. B. BMIIm , which are usually neither water nor fat soluble. These substances are called amphiphobic .

, Lipo molecules containing both hydrophilic (= hydro phobe ) and hydro hydrophilic possess structural parts are called amphi phil . This effect is used by washing-active substances such as surfactants or alkali salts of fatty acids (Na salt = curd soap and K salt = soft soap ). Since these "adhere" to both substances at the interface between hydrophobic dirt and water, the dirt can be dissolved in the water.

An extreme example of a hydrophobic surface is the surface of the leaves and flowers of the lotus . This is rough and also covered with hydrophobic substances. Due to this special feature, it has contact angles of over 160 °, so that drops are almost round on it. Water rolls off such surfaces very well. Any dirt particles lying on it are very easily washed away. This effect is called the lotus effect .

Clarification of the term

This section needs to be revised: Enthalpic amount ( surface energy !!) is omitted, unclear whether entropic contribution is a hypothesis, does the section title only refer to proteins?
Please help to improve it , and then remove this flag.

Schematic representation of the hydrophobic effect in protein folding with polar areas (blue) and non-polar hydrophobic areas (red) in an aqueous environment and in an unfolded (left) and folded (right) state.

The hydrophobic effect was first associated with a reduction in the entropy of water by Walter Kauzmann . The main argument is the assumption that the water molecules in the direct vicinity of a non-polar molecule (to which they cannot form hydrogen bonds ) bind to one another somewhat more strongly than in "free" water. These adjacent water molecules are thus slightly higher ordered and therefore more restricted in their translational and rotational movement. However, as described below, it is not a matter of a dramatic reduction in local water mobility, as was previously assumed. In connection with this particular sphere of solvation, one speaks of "hydrophobic hydration " of the inert species.

Because, according to the 2nd law of thermodynamics, entropy can never decrease in a closed system , several hydrophobically hydrated, non-polar molecules accumulate. This reduces the surface area to the water and thus the number of more ordered water molecules in the medium. This increases the entropy. This hydrophobic association is the basis of biomembrane formation in certain (e.g. elongated) molecules .

In the solvation shell of small, non-polar particles, the slowing down of the water molecules is a few 10% due to the stronger interaction with other water molecules at room temperature, e.g. 30% for the noble gas xenon . In the case of larger, non-polar molecules, the rotation and diffusion of the water in the solvation sphere can also slow down by a factor of 2 to 4. That means z. B. that the reorientation correlation time of the water at 25 ° C increases from 2 picoseconds to 4 to 8 picoseconds.

It is assumed that the hydrophobic effect also plays an important role in protein folding ( hydrophobic collapse ). Because although the entropy of the protein decreases sharply due to its folding ( ), the entropy gain predominates (presumably) in the surrounding aqueous medium ( ). Hence the total entropy change

with which applies to the entropic contribution . Thus, the folding happens spontaneously ("by itself") and does not require any additional energy supply.

Essential knowledge about the water structure around hydrophobic particles and thus about the causes of the hydrophobic effect can be obtained from molecular dynamic computer simulations .

The hydrophobic effect can be quantified by determining the distribution coefficient of non-polar particles between water and non-polar solvents. The distribution coefficients can (in the NPT ensemble ) be converted into the free enthalpy of transfer ΔG = ΔH - TΔS , which consists of the enthalpic component ΔH and the entropic component -TΔS . These two components can be measured calorimetrically .

Weakening of the hydrophobic effect due to temperature and / or pressure changes can lead to denaturation of biomolecules. If additives, for example salts, are added to the aqueous solution, the hydrophobic effect is also changed; it can be both increased and decreased. Addition of larger amounts of urea z. B. leads to a denaturation of proteins. The strength of the influence of salts and thus of ions dissolved in the water on the hydrophobic effect is characterized by the so-called " Hofmeister series ", an ion sequence that has been empirically determined since the 19th century and is known to this day is not fully understood theoretically. About nuclear magnetic relaxation measurements showed that anions find an attraction to the hydrophobic interface, this is not applicable for the cations. This effect can possibly explain details in the so-called Hofmeister series .