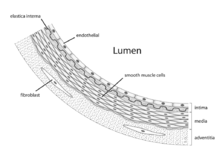 The tunica media (from Latin tunica = "garment" and media "central") is the middle layer of the arteries and veins ( blood vessels ). This layer is often referred to simply as media . It consists of smooth muscle cells , collagen and elastic fibers . It lies between the inner tunica intima and the outer tunica adventitia .

The strength of the muscle layer varies greatly from one blood vessel to another. In general, the media in arteries is particularly well developed and forms the strongest wall layer. In the case of the veins, the boundary between the three wall layers is often very blurred, while in the case of the arteries they are clearly delimited from one another. In arteries there may be an elastic membrane between the media and tunica externa , the membrana elastica externa, and between the media and tunica intima the membrane elastica interna . This is the case with the aorta , for example .

The media in arteries

In arteries, the tunica media is responsible for the width of the lumen and the production of extracellular matrix . With large arteries, the media is the strongest layer. The muscle fibers have the task of withstanding the pressure (blood pressure) in the vessel and regulating it.

Due to the high content of elastic fibers in the tunica media , elastic arteries look yellowish macroscopically. In the muscular arteries, on the other hand, the media consists of tightly and helically arranged smooth muscle cells and only little elastic and collagenous connective tissue.

The media in veins

In principle, the structure of the tunica media in veins is the same as that of the arteries, but veins have a much thinner muscle wall than arteries.

The muscle layer in the tunica media is subject to various degenerative processes, which can lead to decreased elasticity (stiffening) of the vessel wall, to thickening, deposits and narrowing ( stenoses ). This is a natural process that is caused by an age-related, reduced ability of the cells involved to regenerate .

The tunica media plays an important role in the development of arteriosclerosis . Due to the saturation of the muscle layer, due to increased pressure requirements, especially in the case of arterial hypertension , the muscle wall can become so strong that it is poorly supplied with oxygen itself. This can lead to cell death and scarring in the muscle layer. The lumen may then be narrowed so much that too little or no blood can flow through the affected vessel. If the blood flow is too slow, thrombi and clots can form, which can lead to vascular blockage . The arterioles and capillaries are particularly affected .