As metastasis ( ancient Greek μετάστασις , "migration") is in the medicine of a pathological affection denotes a Absiedelung in a distant from the origin of the disease stove body part. Such a spread usually takes place via the blood or the lymph in connection with cancer . 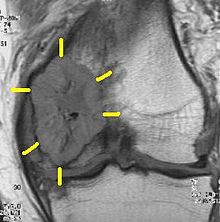 Metastasis of renal carcinoma in the knee, magnetic resonance imaging

The ability of a tumor to metastasize (formation of metastases) significantly worsens the chances of a cancer cure. Even very small tumors can metastasize, e.g. B. Breast cancer one centimeter in diameter in 20% of all cases. On average, in 30% of all patients with malignancies, metastases are found at the initial diagnosis. In another 30%, they are only found in the further course of treatment. If there are visible distant metastases, there are usually numerous micrometastases , which significantly worsens the prognosis.

Metastases arise when cancer cells detach themselves from the original tumor, migrate with the blood or with the lymph, and then colonize and multiply in other parts of the body. Depending on the route of spread, they are called hematogenic (blood) or lymphogenic (lymph) metastases. According to the latest research results, whether cancer cells metastasize depends on their ability to initiate embryonic transcription factors .

The precondition for metastasis is that the cancer grows invasively, i. H. into adjacent structures with breakthroughs in blood or lymph vessels. By definition, benign tumors never metastasize. But not every invasively growing tumor causes metastases. If such a tumor does not form metastases, it is referred to as semi-malignant ( "semi-malignant"). This is the case , for example, with basal cell cancer .

As long as a tumor does not metastasize, the term invasion refers to its growth into surrounding tissue. In this sense, a distinction is usually made between invasion and metastasis (metastasis). However, the penetration of metastases into other regions of the body can also be described as an invasion and the term can be broadly defined in this sense.

The ability to penetrate the body's own barriers such as the basement membrane or the blood-brain barrier, to actively seek out a blood or lymph vessel ( chemotaxis ), to penetrate the vessel, to defend itself against the body's immune system during the migration in the blood , and elsewhere the vessel leaving and eventually multiplying is called invasiveness . It is an active function of malignant cancer cells, depending on the genetic characteristics of the individual tumor. Only about 0.01% of all cancer cells circulating in the blood eventually manage to form a metastatic colony.

The biochemical processes that enable certain cells to metastasize and not others are the subject of intensive research. It could e.g. It has been shown, for example, that the reduced expression of cadherins (“adhesive molecules”) on their cell membrane makes tumor cells more mobile. Other membrane structures, the so-called integrins , should play a role in the attachment of the cells in the target area . Oncogenes and tumor suppressor genes have already been identified, the expression of which can increase or decrease the metastatic tendency.

Tumor cells that have been detached passively (e.g. by biopsy needles) and carried over to them cause metastases only very rarely.

Cancer cells circulating in the blood

Newer diagnostic methods such as liquid biopsy prove the importance of circulating tumor cells of epithelial origin (CETC, circulating epithelial tumor cells ). In the adjuvant situation, i.e. after the surgical removal of the primary tumor, various chemotherapy methods are used to destroy the remaining tumor cells that have remained in the body and are circulating in the blood. In 2005, Gianni Bonadonna and colleagues showed that around 50% of chemotherapy treatments did not lead to significantly increased patient life. This result can be attributed to the fact that a biopsy of the primary tumor is used when selecting chemotherapeutic agents. Some scientists now assume that the selection of therapeutics available according to the S3 guidelines by means of chemosensitivity tests (in vitro blood tests in which the death rate of tumor cells is tested with the addition of the therapeutics in a blood sample before administration) increases the effectiveness of the therapeutics could improve greatly.

The first destination for metastases is usually downstream, i.e. for tumors of the body wall and extremities in the lungs and brain, for tumors of the intestine in the liver (because the blood coming from the intestine first flows into the liver and only then back to the heart ). The lymph vessels lead to lymph nodes, which are mostly in close proximity to the tumor, for breast cancer z. B. in the armpit. However, it is entirely possible that a first destination will be skipped. Some types of tumor metastasize to specific organs, such as lung cancer in the adrenal glands , apparently as a result of surface properties of the cancer cells. This target mechanism (organotropy, homing tumors) is not yet fully understood.

In the case of osteoclastic bone metastases, the tumor cells influence the body's own osteoclasts in such a way that they increasingly break down the hard bone substance in order to enable the metastasis to grow further. As far as we know today, metastasizing cancer cells, unlike other cells, are also able to cause surrounding blood vessels to sprout ( angiogenesis ). This is the only way to supply the new metastasis with blood. Tumors without angiogenic ability do not grow larger than 0.3 mm.

According to the TNM classification, a distinction is made between local metastases, regional metastases and distant metastases:

Depending on the location and histological type, malignant tumors metastasize to varying degrees, lymphogenic and hematogenic. Lymphogenic metastasis can be mediated by the growth factor VEGF-C . The location of distant metastases is also largely dependent on the histology and location of the primary tumor . According to the current state of knowledge, distant metastases cannot themselves form metastases. They evidently arise exclusively from cells of the primary tumor.

If a whole organ or a body cavity is diffusely permeated by tumor cells, this is called carcinosis (or carcinomatosis). Example: peritoneal carcinoma in colon cancer.

Kidney of a dog with multiple metastases 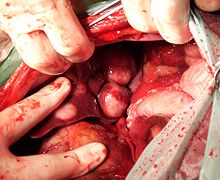 Visualization of the increased vascularization of a splenic metastasis in dogs sonographically using amplitude- coded Doppler. The tumor is characterized by the accumulation of color in the center of the image. Sp spleen tissue

Different organs have different preferred locations of distant metastases. As a rule, a distinction is made between the portal vein and the cava type.

Some tumors typically have their first metastatic site in the bone, such as the prostate (lumbar vertebrae and pelvic area), mammary gland (spine), kidneys.

Various tumors also often metastasize to the skin, mainly metastases from malignant melanoma and other skin tumors. Also lymphomas often affect the skin, but is referred to this attack by a systemic disease rather than metastasis.

The heart , spleen and kidneys are almost never affected by metastases . This is an amazing fact because these organs have high blood flow. It is not clear why they are less likely to be attacked. Metastases in other organs such as the pancreas , stomach , intestines (except through local growth), thyroid gland , thymus and adrenal gland are also rather rare .

In the case of cancer, in addition to the primary tumor, the lymph nodes of the drainage system and "suspicious" lymph nodes from the previous diagnosis (physical examination, computed tomography , magnetic resonance tomography ) are also removed and histopathologically examined for regional metastases. If the lymphatic drainage path is unclear, e.g. In the case of skin tumors, for example, the sentinel node (“ guard node ”) is surgically searched for by injecting radioactively marked paint using a Geiger counter and color marking. Lymph node metastases worsen the prognosis and, with a curative approach, lead to more aggressive therapy.

In order to locate distant metastases, the following examinations are routinely arranged in the form of staging if the primary tumor is confirmed :

In ENT tumors, panendoscopy is also part of the search for metastases . In gynecological and urological tumors, locoregional tumor growth in the surrounding organs is particularly common, which is why the most important staging examination is computed tomography of the small pelvis.