Chemotaxis is one of the most basic cellular physiological responses. In the early stages of phylogenesis , the emergence of receptor systems for the detection of harmful and beneficial substances for unicellular organisms was of significant advantage. Extensive analyzes of the chemotactic processes of the eukaryotic protozoon Tetrahymena pyriformis and the consensus sequence of occurring amino acids in the primordial soup indicate a good correlation between chemotactic properties of these relatively simple organic molecules and the development of the earth. It was therefore assumed that molecules that appeared early (e.g. glycine , glutamine , proline ) are chemically very attractive and those that appear later (e.g. tyrosine , tryptophan , phenylalanine ) have a chemically repellent effect.

In bacteria, the way in which chemotaxis is controlled differs depending on the type of locomotion: free swimming by means of flagella or by rotating helical bacteria ( spirochetes ), crawling on surfaces of solid or gel-like surfaces ( myxobacteria , some cyanobacteria ).

In the case of bacteria that use flagella to move freely in liquid medium, a distinction must be made between polar and peritrich flagella , i.e. between those that only have flagella at one or two ends (“poles”) and those that have multiple flagella Wear distributed over the entire cell surface.

The flagella distributed on the surface of a perithric bacterium rotate as follows:

The general dynamics of a bacterium result from alternating tumbling and swimming movements. If you observe a bacterium in a uniform environment, it looks like a sequence of random movements: relatively straight movements are interrupted by seemingly arbitrary tumbling movements. It is generally not possible for bacteria to choose the direction of movement or to always move in a straight line. This means that the bacteria “forget” in which direction they are moving. Given these limitations, it's noteworthy that bacteria can follow certain chemical attractants and evade pollutants.

In the presence of a substance concentration gradient , bacteria adapt to this environment. If a bacterium “notices” that it is moving in the right direction (towards the attractant / away from the pollutant), it swims longer in a straight line before tumbling. If it moves in the wrong direction, tumbling occurs more quickly and the bacterium randomly takes a different direction. In this way, bacteria reach the higher concentration of the attractant very effectively. Even in an environment with extremely high concentrations, they can respond to minimal deviations.

It is noteworthy that this expedient, seemingly arbitrary mode of movement results from the choice between two arbitrary modes of movement; namely the straight swimming and the tumbling. The chemotactic reactions of the bacteria appear like in higher living beings, which have a brain, the forgetting, the choosing of movements and the quorum.

Substance concentration gradients are perceived by multiple transmembrane receptors called methyl-accepting chemotaxis proteins (MCPs), which differ in terms of their ligands. Attractants or deterrents can be bound either directly or indirectly through interaction with proteins of the periplasm. Signals from these receptors are transmitted through the cell membrane into the cytoplasm and activate Che proteins, which in turn modify the tumbling frequency of the cell or the receptors themselves.

The proteins CheW and CheA bind the receptor. External stimuli cause autophosphorylation in the histidine kinase, CheA, on a single highly conserved histidine residue. CheA, in turn, transfers the phosphoryl group to aspartate residues in response coordinators CheB and CheY. This signal transduction mechanism is called the “two-component system” and is often found in bacteria. CheY induces rotation of the bacterium through interaction with the flagellar switch protein FliM and thus changes the direction of rotation of the flagella from left-handed to right-handed. Changing the direction of rotation of a single flagellum can stop its entire function and cause confusion.

CheB, activated by CheA, acts as a methylesterase and thus separates methyl groups from glutamate residues on the cytosolic side of the receptor. It is an antagonist to CheR - a methyl transferase - that adds methyl groups to the same glutamate side chains. The more methyl esters are bound to the receptor, the more sensitive it is to frightful substances. Since the signal from the receptor triggers its demethylation through a feedback loop, the system is constantly adapted to chemical conditions in the environment and therefore remains sensitive to small changes even at extreme concentrations. This regulation enables the bacterium to “remember” chemical conditions of the recent past and to compare them with the current ones. In this respect, it “knows” whether it is moving with or against a concentration gradient. Further regulatory mechanisms such as receptor clustering and receptor-receptor interactions must be mentioned, as these are also important elements of signal transmission and influence the sensitivity of the bacterium.

The mechanism used in eukaryotes is different from the prokaryotic. Nevertheless, the perception of the substance concentration gradient forms the basis here too. Because of their size, prokaryotes cannot sense effective concentration gradients; thus they scan and assess their surroundings by constantly swimming (alternating straight ahead or rotating). Eukaryotes, in turn, are able to detect gradients, which is reflected in a dynamic and polarized distribution of receptors in the plasma membrane. Induction of these receptors by attractants or chemorepellents triggers migration to or away from the chemical substance. Receptor levels, intracellular signal pathways, and effector mechanisms all represent diverse components of eukaryotic chemotaxis. Here amoeboid movement as well as cilia or flagella are characteristic effectors of unicellular organisms (e.g. amoeba, Tetrahymena). Some representatives of higher vertebral origin, such as B. immune cells, also move to where they are needed. Apart from a few immunocompetent cells (granulocyte, monocyte, lymphocyte), an astonishingly large group of cells - formerly classified as tissue-bound - are in fact under certain physiological (e.g. mast cell, fibroblast, endothelial cell) or pathological conditions (e.g. Metastasis) capable of migration. Chemotaxis is also of great importance in the early phases of embryogenesis , since the development of the cotyledons is controlled by concentration gradients of messenger substances.

In contrast to bacterial chemotaxis, the mechanisms by which eukaryotes move are relatively unclear. In some cases, external chemotactic gradients seem to be perceived, which are reflected in an intracellular PIP3 gradient that influences a signal cascade that culminates in the polymerization of actin filaments. Their growing distal end forms connections with the internal surface of the plasma membrane via various peptides and pseudopodia are formed. A eukaryotic cilium can also be involved in eukaryotic chemotaxis. The movement can be explained by a Ca 2+ based modification of the microtubular system of the basal body and the axoneme (9 * 2 + 2). The coordinated rowing of hundreds of cilia is synchronized by a submembranous system between the basal bodies. The details of the signal cascades responsible are still not clear.

Chemotaxis of granulocytes, explanations in the picture description

Although chemotaxis is the most widely studied method of cell migration, other forms of locomotion at the cellular level should be mentioned.

Eukaryotes sense the presence of chemotactic stimuli mainly through 7-transmembrane (tortuous) heterotrimeric G-protein coupled receptors, the vast class of which makes up a significant part of the genome. Some members of this gene superfamily are used in the visual process (rhodopsin) or the sense of smell. The main classes of specialized chemotactic receptors are controlled by formyl peptides (FPR), chemokines (CCR or CXCR) and leukotrienes (BLT). By the way, cell migration can also be initiated via an abundance of membrane receptors by amino acids, insulin or vasoactive peptides.

Due to their genetic basis, some receptors are integrated into the cell membrane for a long time; others show short-term dynamics in which they assemble ad hoc in the presence of a ligand. Its various facets and the versatility of the ligands allow the selection of a responder through a simple test. Chemotactic selection can be used to demonstrate whether an as yet uncharacterized molecule functions via the long or short-term path. The term chemotactic selection also designates a technique that sorts eukaryotes or prokaryotes based on their sensitivity to selector ligands. 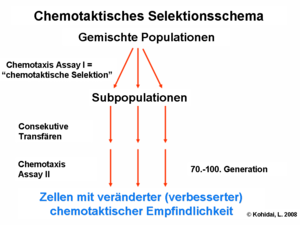 The list of molecules that elicit chemotactic phenomena is relatively long - a distinction is made between primary and secondary. The most important representatives of primary ligands are:

Investigations of the 3D structure of chemokines allow us to conclude that a characteristic linkage of β-sheets and alpha-helixes enables sequence expression that is essential for interaction with the receptor. Dimerization and increased biological activity have been shown by crystallography for several chemokines such as B. IL-8 demonstrated.

A differentiation is generally made on the basis of the optimal effective concentration of the ligand. Sometimes, however, correlation of the evoked effect and the ratio between responder cells and the total number are also considered. Studies on ligand families (e.g. amino acids or oligopeptides) have shown that there is an interaction between range (deflection, number of responders) and chemotactic activity: The lock function can also be observed over great distances; repulsive character, on the other hand, acts at a short distance.

An altered migratory potential of the cells is of relatively great importance in the development of several clinical symptoms and syndromes. Modified chemotactic activity of extracellular (e.g. Escherichia coli) or intracellular (e.g. Listeria monocytogenes) pathogens is of tremendous clinical interest. Changing the endogenous chemotactic competence of these microorganisms can reduce or even erase the incidence of infections or the spread of many contagious diseases. Aside from infectious diseases, there are several other conditions in which impaired chemotaxis is the primary aetiological factor, such as Chediak-Higashi syndrome , where gigantic intracellular vesicles inhibit normal cell migration.

A variety of techniques are available to evaluate the chemotactic activity of the cell or the attractive or repulsive character of the ligand. The basic requirements for the measurement are as follows:

Aside from the fact that there is still no ideal chemotactic exam, some protocols and pieces of equipment are consistent with the conditions described above. Most commonly used are:

In order for a cell to move, it needs some cellular components (such as cellular motors, various enzymes, etc.). Furthermore, it must be able to change its shape. In general, one speaks of two types of cell locomotion:

The question of the temporal development of the concentration of chemotactically excitable cells or living beings in a volume leads to the partial differential equation using the Gaussian integral theorem. In addition to the chemotactically induced movement along the gradient , the flow usually also has a diffusion component. The equation thus takes the form . It denotes a diffusion constant. In addition to this simplest case, there are mathematical descriptions of more complex situations in theoretical biology in which, for example, the chemotactically active substance can be produced by the cells themselves.

Movement of living beings and cells was first discovered during the development of microscopes ( Leeuwenhoek ). More detailed investigations, including chemotaxis, were carried out by Theodor Wilhelm Engelmann (1881) and Wilhelm Pfeffer (1884) in the field of bacteria and by HS Jennings (1906) in the field of ciliates .

The Nobel laureate Ilya Ilyich Metschnikow has contributed to further advances with his studies of phagocytosis . The importance of chemotaxis in biology and clinical pathology was largely recognized in the 1930s. During this time, basic definitions were drawn up on the subject. H. Harris described the most important quality control methods for chemotaxis tests during the 1950s.

In the 1960s and 1970s, the breakthrough in modern cell biology and biochemistry laid the foundation for new methods that enabled the study of migratory responder cells and subcell fractions that are responsible for the chemotaxis of cells. J. Adler's pioneering studies marked a major turning point in our understanding of the entire process of intracellular signaling in bacteria. On November 3, 2006, Dennis Bray, University of Cambridge, received the Microsoft European Science Award for his studies of the chemotaxis of Escherichia coli .