Atherosclerosis (imprecisely also arteriosclerosis ) describes the pathological storage of cholesterol esters and other fats in the inner wall of arterial blood vessels . Atherosclerosis occurs primarily in the coronary arteries , the junction of the carotid artery and the large arteries of the leg. It is a chronic inflammatory process: fatty streaks can already be detected in the vessels of young people, which slowly develop into atherosclerotic plaques in which a fat core is covered by a more or less stable layer of connective tissue .

Atherosclerotic plaques can constrict vessels so much that the oxygen supply to the affected organ is impaired, which can manifest itself in the affected person as tight chest (heart) or intermittent claudication (leg). When atherosclerotic plaques tear, blood clots form that can completely obstruct the vessel , resulting in medical emergencies such as heart attacks and strokes . Atherosclerosis is a disease of civilization and is now the most common cause of death worldwide.

In colloquial terms, hardening of the arteries is often referred to , but there is no deposit on the surface of the inner wall of the vessel, nor is it chemically any form of calcium . Atherosclerotic plaques, however, often contain other calcium salts (e.g. calcium phosphate ) that harden the vessel.

Atherosclerosis is a form of hardening of the arteries ( arteriosclerosis , from ancient Greek ἀρτηρία artería , German 'vein' and σκληρός sklerós , German 'hard' ). Arteriosclerosis is often used synonymously in German with atherosclerosis, but strictly speaking also includes Mönckeberg sclerosis , in which the middle vascular layer hardens due to the storage of calcium salts, as well as arteriolosclerosis , which pathologists use to describe the storage of hyaline substance in the arterioles of certain organs. Within the vascular diseases ( angiopathies ), atherosclerosis is one of the macroangiopathies because it affects arteries, i.e. larger vessels; Disturbances of the microcirculation such as diabetic microangiopathy are to be distinguished from this . 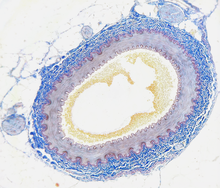 The disease is characterized by a chronically progressive degeneration of the arterial walls . Connective tissue overgrowth, intra- and extracellular deposits of cholesterol , fatty acids and calcium phosphate as well as the accumulation of collagen and proteoglycans lead to hardening and thickening of the vessel walls, which are accompanied by a decrease in the elasticity of the vessel walls and i. d. Usually also lead to narrowing of the vessel volume. The mineral deposits that occur are carbonate-containing hydroxylapatite , which is chemically very similar to the calcium phosphate phase of the bone.

The pathogenesis of atherosclerosis is the subject of ongoing research and is not fully understood. With the help of the ever more detailed understanding of the biochemical processes in and between cells and on the basis of (numerous) histological findings , attempts are made to clarify the causes and the biochemical process.

Regarding the elucidation of the mechanisms that lead to the initiation of arteriosclerosis, two central hypotheses have emerged in the last decades of broad arteriosclerosis research: the “Response to injury hypothesis” and the “Lipoprotein-induced atherosclerosis hypothesis”.

According to the response to injury hypothesis put forward by the American atherosclerosis researcher Russell Ross in 1976 , an injury to the inner arterial wall layer initiates arteriosclerotic events. The inner layer of the artery wall, the intima , consists of a single-cell layer of endothelial cells and the subendothelial connective tissue. In his work Ross lists several causes for the injuries to the endothelial cell layer. This includes morphological damage due to trauma , for example due to high blood pressure or mechanical injuries, biochemical damage due to bacterial toxins , attack by viruses or antigen-antibody reactions as well as biophysical injuries at the molecular level. As a result of violation of the endothelial cell layer, two observed phenomena typical for the emergence of this disease: on the one hand by growth factors or cytokines induced growth ( proliferation ) and migration (migration) of smooth muscle cells from the multi-layered media into the intima, and on the other Formation of foam cells in the intima and media caused by fat storage . Over a longer period of time, these two phenomena lead to the formation of focal tissue changes (plaques), which are characteristic of the picture of arteriosclerosis. In recent years, an increased rate of apoptosis has increasingly become the focus of research interest.

The "response-to-injury" hypothesis presupposes a specific injury that naturally occurs for a limited time. A modified approach speaks of endothelial dysfunction as the cause of the triggering of arteriosclerosis, which means any malfunction of the endothelium that promotes the development of arteriosclerosis. Whether the malfunction is caused by a singular injury or by a gradually occurring imbalance of endothelial functions is irrelevant.

The American researcher and Nobel Prize winner Joseph Leonard Goldstein was the first to report on the rapid uptake of chemically modified LDL by macrophages and the subsequent conversion to foam cells. The chemical modification consisted of acetylation of the protein portion. In view of the important role of LDL and its modified (oxidized) form in the development of arteriosclerosis, a new hypothesis emerged that sees the damage to endothelial cells only as a partial step in a sequence of complex processes. The oxidative modification of LDL or the contents of the LDL particles is seen as the real cause of the initiation of the arteriosclerotic process.

In the description of the further course, both hypotheses are identical. The formation of foam cells causes an inflammatory reaction which in the further course can spread to deeper areas of the arterial wall  - such as the media with its muscle cells. The result is a gradual tissue remodeling, with a connective tissue-like cap forming in the artery , which has a lipid core inside. The lipid core results from the content of the dead foam cells that have absorbed a large amount of oxidized LDL particles. Blood clotting reactions then take place on broken arteriosclerotic plaques , which further reduce the diameter of the arteries. This tissue remodeling makes the damaged artery brittle. The final stage of this process is known colloquially as "hardening of the arteries". The formation of arteriosclerotic plaques can be reversed until the foam cells have increased. This effect was observed in a number of people who started endurance sports, with the cholesterol level falling significantly and the ratio of the various lipoproteins shifting significantly towards HDL . Beyond this stage the process is no longer reversible; the damage is permanent.

The intestinal flora is also believed to have an influence on the development of arteriosclerosis . For example, intestinal germs can form trimethylamines from the phosphatidylcholines (also known as “ lecithin ”) and L- carnitine ingested with food , which are then metabolized to trimethylamine-N-oxide (TMAO) in the liver . This has pro-arteriosclerotic properties and it is assumed that TMAO suppresses the transport of cholesterol out of the cell. This leads to the deposition of cholesterol on the vessel walls, which promotes the development of arteriosclerosis. Trimethylamine-producing germs are found particularly in a meat-rich diet. The formation of TMA can be inhibited by 3,3-dimethyl-1-butanol , which in animal models prevents arteriosclerosis despite pro-arteriosclerotic nutrition.

The inner walls of the blood vessels are lined with endothelial cells that are exposed to shear stress due to the flow of blood . The endothelial cells perceive the shear stress and react to it with the production of nitrogen monoxide (NO). NO dilates the blood vessel and inhibits smooth muscle growth. NO also inhibits the accumulation of platelets and immune cells on the vessel wall and the oxidation of LDL in the intima. In this way, the NO protects locally against atherosclerosis.

The blood cannot flow evenly ( laminar ) at the branching vessels, but forms - reinforced by the pulsatile blood flow - eddies in which the flow direction of the blood changes chaotically (turbulent flow). Under these conditions, the endothelial cells switch on proinflammatory signaling pathways and produce less NO. As a result, branching vessels are particularly often affected by atherosclerosis.

As a result of arteriosclerosis, constrictions and occlusions can form in the affected vessel sections. The vessel wall can also be weakened to such an extent that it expands and creates an aneurysm . Both the constrictions and the widenings in turn cause disturbances in the laminarity of the blood flow, as a result of which the endothelial damage, which is stimulated by the flow conditions, continues.

Frequent and significant consequences of arteriosclerosis are stroke when the large cervical arteries ( common carotid artery , internal carotid artery ) are affected, myocardial infarction when coronary arteries clog, dilation of the abdominal artery ( aortic aneurysm ) and arterial occlusive disease of the legs (PAD) . The arterial vessels that supply the internal organs with blood are more rarely affected. Symptomatic PAD of the arm arteries is found in around ten percent of cases.

Other risk factors are:

Likewise, other diseases such as chronic kidney failure , hyperthyroidism (overactive thyroid), gout and rheumatoid arthritis can increase the risk of atherosclerosis secondarily.

In general, the risk factors can be divided into those that cannot be modified, such as age, gender and genetic predisposition, and those that can be influenced. However, it has not been scientifically shown for all modifiable risk factors that a reduction in the risk factor is also associated with a lower risk of atherosclerosis. Risk factors, the correction of which has been proven and relevant to the prognosis, are smoking, high blood pressure and the consumption of animal fats.

The prevention and treatment options for arteriosclerosis are largely identical and differ mainly in terms of their extent. Only invasive medical (surgical) interventions are added to the treatment options . The most important things for pure prevention in otherwise healthy people are sufficient exercise and a generally healthy diet.

Adequate exercise even in light form (walks) can have a considerable influence on the development and course of arteriosclerotic diseases. Endurance sports in the scope of recreational sports are recommended as regular sports. Sport on the scale of competitive sport is neither considered necessary nor recommended.

The general rules of healthy human nutrition should be observed (including plenty of vegetables, fruits and whole grain products). However, the typical Mediterranean diet is particularly recommended in connection with atherosclerosis.

The consequences of arteriosclerosis are primarily based on circulatory disorders such. B.

With regard to the brain, for example, the detachment of arteriosclerotic plaques can lead to a stroke or dementia changes .