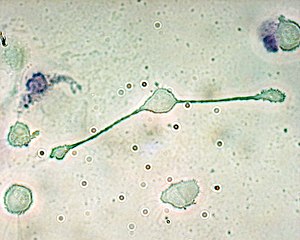 A macrophage of a mouse with two protuberances ( pseudopodia ) that flow around foreign particles and ingest them for the purpose of destruction.

Macrophages (abbreviation ΜΦ ; from ancient Greek μακρός makrós , German 'big' and ancient Greek φαγεῖν phagein , German 'eat' , "giant eating cell ") belong to the scavenger cells ( phagocytes ) and are leukocytes (white blood cells), so belong to the cells of the Immune system . They are used to eliminate microorganisms by phagocytosis and make phylogenetic ( phylogenetic ) probably oldest parts of the innate immune system. Thus, macrophage-like cells in the fruit fly Drosophila and have even been identified in plants.

A distinction is made between two types of macrophages based on their developmental origin. In the bone marrow develop monocytes and migrate into the blood vessels, where they circulate in the bloodstream throughout the body. If they come into contact with infections during this time , like neutrophils , they are able to migrate more intensely into the affected tissue. There they differentiate into macrophages under the influence of cytokines and pathogen substances. However, these macrophages are short-lived and constantly need to be replaced by new bone marrow cells. Depending on the stimulation they can take various forms: some reduce greatly their cytoplasm and then epithelioid cells called because of their resemblance to epithelial cells. Activated macrophages can also fuse and form multinucleated giant cells to enclose and digest larger foreign bodies by phagocytosis. Furthermore, macrophages are found in breast milk , in which they serve to secrete the enzyme lysozyme and immunostimulatory substances.

Under normal conditions, no monocytes are recruited into the tissue to differentiate into macrophages. But there are resident macrophages in all organs. To describe their localization in different tissues, they were given special names. They are called microglia in the brain , Kupffer stellate cells in the liver , alveolar macrophages in the lungs , polynuclear and osteoclasts found in bones , chondroclasts in cartilage tissue, histiocytes in connective tissue , hyalocytes in the vitreous humor of the eye and Hofbauer cells in the placenta . Most of these resident macrophages do not develop in the bone marrow, but arise in the prenatal phase in the yolk sac of the embryo, are long-lived and are obtained from the bone marrow independently of stem cells.

The designation can also be based on the material invested. B. lipophages (containing fat, e.g. "foam cells" in atherosclerotic plaques or in adipose tissue necrosis), mucophages (containing mucus, e.g. in salivary gland cysts) or siderophages (containing iron or hemosiderin, e.g. after bleeding or as " Heart defect cells ”in the lungs). 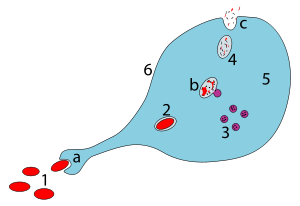 Phagocytosis in macrophages:
a. Uptake by phagocytosis , a phagosome is formed.
b. The union of phagosome and lysosome forms a phagolysosome. The pathogen is then broken down by enzymes.
c. Dissolved material is excreted or assimilated.
Explanation of symbols:
1. Pathogen
2. Phagosome
3. Lysosome
4. Residues
5. Cytoplasm
6. Cell membrane

Foreign proteins or glycoproteins , such as those on the surfaces of viruses and bacteria , are recognized in the tissue of macrophages. In a process known as phagocytosis , the microorganisms are absorbed or actively "flowed around" and partially crushed intracellularly. At the same time, macrophages and neutrophilic granulocytes "activated" in this way release chemical attractants ( chemokines ), which recruit other cells of their kind from the bloodstream. Released cytokines also cause local inflammation. The components of the previously ingested pathogen are then transported to the cell surface of the macrophage and connected to it by an MHC-II molecule .

The antigen presentation enables the activation of cells of the acquired immune system ( T-helper cells ). These, in turn, send a signal back to the macrophages to destroy the pathogens previously absorbed. In contrast to dendritic cells , activated macrophages have only a limited ability to activate naive T cells (i.e. T cells that have not yet come into contact with an antigen) . Macrophages (especially those in secondary lymphatic organs), however, contribute to the fact that T cells multiply strongly and differentiate into “acting” effector T cells and memory T cells. In addition to this activation of the acquired immune system, macrophages also remove aged, destroyed and apoptotic cells from the body. After a successfully combated infection, macrophages are involved in the healing process by promoting scar formation (granulation tissue) and the formation of new blood vessels ( angiogenesis ).

Macrophages can also be directly involved in the function of an organ. In the connective tissue of the testicle, for example, they secrete 25-hydroxy cholesterol, a substance that is absorbed by neighboring Leydig cells and is used there to synthesize testosterone . In the event of an inflammation of the testicle , the macrophages take on their immunological function and are no longer available to support testosterone production. This leads to infertility .

In the case of tuberculosis , macrophages take up the pathogen (usually Mycobacterium tuberculosis ) according to their function . In contrast to other bacteria, however, the tuberculosis pathogens are able to survive within the macrophages due to the waxy nature of their cell wall. Nevertheless, more monocytes are recruited from the blood, which transform into epithelial cells and accumulate. These macrophage descendants, striking because of their cat's tongue-like nucleus, form a protective wall, in the center of which the infected cells die off. The structure enclosed by epithelial cells with a diameter of up to 1 mm is called a granuloma . The epithelial cells can also fuse to form multinucleated Langhans giant cells , which, however, should not be confused with the Langerhans cells of the epidermis.

In the case of lipid metabolism disorders, obesity and diseases such as Niemann-Pick syndrome or Alport syndrome , macrophages can absorb excess lipids and are then called "foam cells". In the bloodstream, this form plays a role in the development of arteriosclerosis .

Blood congestion in the lungs of patients with heart disease can result in an accumulation of hemosiderin . The local alveolar macrophages take up this iron-protein complex. These cells and their "cargo" can be detected in the coughed up secretions of the respiratory mucous membranes in the corresponding patients. In this way, they can also serve as diagnostic tools, which is why these macrophages are called "heart defect cells".

Another special form of connective tissue macrophages are the "Anitschkow cells", which are involved in the formation of rheumatic granuloma . This structure is also known as the Aschoff nodule.

On Rudolf Virchow based proposal described Kranid Slavjanski 1863 for the first time that he in alveoli of rabbits in whose trachea he previously a cinnabar solution dripped, cells found, " which had the character of white blood cells and sometimes even vermilion contained ". Contrary to previous theories, he concluded from his experiments that these cells should not be seen as " metamorphosed alveolar epithelia ", that is, originating from the lung mucous membrane. It is " obvious to accept them as white blood cells that migrate out of the vessels ". As far as we know today, he not only described the first “ consuming ” alveolar macrophages, but also their ability to migrate from the blood vessel system into organs.

It was not until 1880 that Ilya Metschnikow described the principle of phagocytosis. Based on his investigation of phagocytic cells in starfish , he coined the term “macrophages” and recognized their importance for the immune system. Metchnikoff and Paul Ehrlich received the Nobel Prize for Physiology and Medicine in 1908 for these and other achievements in the description of the cellular immune defense .

In the first half of the 20th century, the function of “solid” tissue macrophages (histiocytes) was increasingly described. Building on this, Ludwig Aschoff and other scientists defined the principle of the reticuloendothelial system (RES), which was expanded in the late 1960s under the name of the mononuclear phagocytic system .

Compared with other cells, the study of the cell biology of macrophages proved difficult in the following years . It was not until the mid-1980s new knowledge has been gained about the importance of macrophages: So was macrophages after LPS -Contact a produced by them and hitherto unknown cytokine discovered the tumor necrosis factor -specific macrophage also by discovering growth factors such as M-CSF to During this time new insights into the cell differentiation of monocytes to macrophages were gained.

In the 1990s, surface markers were increasingly used to localize subpopulations of macrophages in various tissues. In this way, previous definitions of tissue-specific macrophages could be consolidated.

Original table with references for all articles in PMID 22416241 (OA).