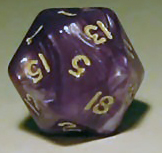 The system is named after a 20-sided die.

The d20 system (the used 20-sided die , d of English. Dice for dice) is a by Wizards of the Coast under the Open Game License published RPG system without predetermined campaign world . The key point is the separation and interchangeability of the rules of the game and the world; The aim is that every role-playing world should be playable under d20 . The system is heavily designed for medieval fantasy worlds . For role-playing games that are set in a more modern world, there is the so-called d20 Modern .

The most famous pen & paper role-playing game , Advanced Dungeons and Dragons , was completely reworked by Wizards of the Coast (WotC) to the d20 system and is now called Dungeons and Dragons 4th Edition , which appeared in July 2008, based on that Original from the 1970s by Gary Gygax . In the computer role-playing area, games such as Neverwinter Nights rely on d20 and the D&D based on it .

One of the ideas under the d20 project was to provide a legal basis for the appearance of expansions for the role-playing game Dungeons and Dragons . There are now dozens of third-party companies that manufacture such extensions for Dungeons and Dragons under the d20 license . The d20 set of rules is available for free download from the official d20 website . In the past, the German distributor Feder & Schwert had refused to provide a German rule document accordingly. In response to repeated questions from fans, the reasons given were legal concerns, as the American rights holder WotC does not tolerate localized versions of the SRD (System Reference Document). This is countered by the fact that in France there has been a translation of the SRD published by the licensee there since the French basic regulations were published, without WotC ever taking any legal action against it. In April 2008, Feder & Schwert surprised the fan base with the announcement that the American publisher had loosened the legal fetters and that nothing stood in the way of a German translation of the SRD. The announcement was received differently in fan circles. While most of the fans were pleasantly surprised and immediately started working on the translations in the relevant forums, others criticized the fact that the decision had come too late in view of the upcoming 4th edition of Dungeons & Dragons rules.