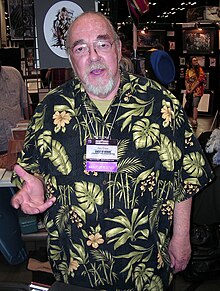 Gary Gygax was the son of Martin Gygax, a musician who had emigrated to America from Switzerland and played the violin in the Chicago Symphony Orchestra, and an American. Gygax was born in Chicago and raised in Lake Geneva, where his family moved when he was eight years old. He dropped out of high school without a degree, took a variety of odd jobs, attended night school, and studied anthropology at the University of Chicago . He made his living as an insurance agent until his gaming systems were successful.

He and Jeff Perren invented the game Chainmail , from which the medieval -looking Dungeons & Dragons (D&D for short) was developed in the late 1960s . Gygax and Don Kaye founded their own game publisher , Tactical Studies Rules (TSR), with which they published the first version of D&D in 1974. In 1975 Gygax came across an English magazine called Owl and Weasel . He contacted the authors, including Ian Livingstone , and sent them a version of D&D. The English were immediately enthusiastic and sold the game in England with enormous success. Gygax later developed a new version of D&D, which was released from 1977 to 1997 under the name Advanced Dungeons & Dragons .

Before D&D, Gygax and his friend Dave Arneson worked on wargaming ("Chainmail") - here battlefield scenarios were recreated with plastic figures. Arneson had the idea to let the soldiers take the castle in a commando operation, whereby they had to defuse traps and open doors. In this way every player learned to identify with his warrior. Success was inevitable and whole worlds like Arneson's Blackmoor and Gygax's World of Greyhawk were born . Since Chainmail was not fully developed for this, it was expanded and things like "hit points" were integrated. At first it was named "The Fantasy Game". But the name wasn't catchy enough, and Gygax's wife came up with the name "Dungeons & Dragons".

Another Gygax creation was DragonChess , a three-dimensional fantasy variant of chess that was published in issue 100 of Dragon magazine in August 1985 . It is played on three 8 × 12 boards that are stacked on top of each other. The upper board stands for the sky, the middle one for the earth and the lower one for the underworld . The tokens are modeled on figures and monsters from the D&D series: king, magician, paladin, cleric, dragon, griffin, oliphant, hero, thief, elemental, basilisk, unicorn, dwarf, sylph and warrior.

After Gygax left TSR, he published Dangerous Journeys , an advanced role-playing game that combined several genres. In 1995 he began work on a completely new role-playing game, which was originally intended as a computer game , but was released in 1999 under the name Lejendary Adventure . It is considered in part to be his best work. He paid special attention to the simple rules of the game, as Gygax said that role-playing games had become too complex over time and thus deterred new players.

Gygax voiced himself in the original English version of the animated series Futurama in the episode Stories of Interest I and in the animated film Futurama: Bender's Game (posthumously from archive material). He also received a memorial in a cemetery in the MMORPG implementation "Dungeons & Dragons Online: Stormreach", in which he also lends his voice to the game master in a dungeon. He died on March 4, 2008, at the age of 69, of complications from a heart attack at his home in Lake Geneva, Wisconsin, where he was still leading D&D rounds in January.

"I hope, for the rest of the world, I will remain the guy who really loved games and shared his knowledge and leisure activities with everyone."