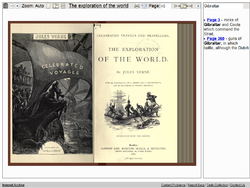 Example of a full text ad

Open Library ( English for Free Library ) is a project for the collaborative creation of an online library based on a bibliographic database. The self-declared aim of the Open Library is to create a separate website for every book published so far. In many cases, in addition to the bibliographical evidence, access to the digitized version of the respective book title with stored full text is made possible.

As a sub-project of the Internet Archive , the Open Library was largely initiated by Brewster Kahle and was officially launched on July 16, 2007. The Open Content Alliance is a partner of the Open Library project .

The metadata contained in the Open Library comes from publishers, libraries and private individuals. Thanks to a structured wiki , anyone can work on the Open Library and catalog books or edit existing records on works or authors.

The Open Library is not for profit.

According to its own information, the Open Library contains around 30 million data records, 20 million of which are publicly accessible and editable with bibliographic information on books. Around 5% of this is also linked to a digitized version of the corresponding title.

The complete digitized material documented in the Open Library comes predominantly from the book titles stored in the text archive of the Internet Archive and no longer protected by copyright, as well as from the books digitized as part of the Open Content Alliance . Access to these digitized books is usually also via the text archive of the Internet Archive. There are now many titles from Google Book Search . The Internet Archive BookViewer enables you to leaf through digitized books directly in the browser; they are also searchable as an OCR- generated full text has been stored. In many cases, the digital copies are then also available for download in various file formats (including PDF , EPUB , DjVu ).

There is a “scan-on-demand” cooperation with the Boston Public Library : if you come across a public domain book in the Open Library that is in the Boston Public Library's holdings and has not yet been scanned, a button “Scan this book ”is displayed. A click on this button causes a library employee on site to take the book from the shelf and bring it to the “Scanning Center”, where it is digitized for the Open Library.

The Open Library uses a Lighttpd server with a FastCGI interface as its web server . The search is based on a Solr search server with a Lucene program library .

Infobase is used as the database, an in-house development that was specially developed for the purposes of the Open Library: It can be used to save and version any structured large amounts of data created by a large number of users . The interface is based on Infogami, a structured wiki based on Python .

Since May 6, 2010 the Open Library has had a new layout and expanded functions. The beta phase has officially ended with the relaunch, but the new version is not yet fully functional.

A form is displayed for cataloging bibliographic data in which the relevant data can be entered. No mandatory fields are defined here. There is a register for the "Author" field that can be expanded by anyone. All other fields do not have a register.

In addition to entering the common bibliographic data, the DDC and LoC classifications can also be entered. In addition, it is possible to include a structured table of contents, a description and the first sentence of the book in the catalog. Users can also upload book covers or pictures of the authors to the metadata of a title.

The Open Library offers both a simple and an advanced search. In addition, faceted browsing ( drill-down ) is possible, in which the search results can be modified by switching various filters on and off. A ranking of the hit lists, e.g. B. according to relevance criteria, however, is not possible.

Links with other services

The individual titles in the Open Library contain links to Google Book Search and to booksellers such as Amazon and AbeBooks . In addition, reference is made to the corresponding WorldCat entry in the respective book.

Moreover, there is the possibility of using machine-readable tags from Flickr to link -photos on open library book and author sites.

OCLC and the British Library, however, do not endorse the Open Library.