From the mid-1960s onwards, people in Europe, especially in England at the London School of Economics and Political Science (LSE) and the Publisher Association of Great Britain , began to think about a clear international identification of books. In 1966, the largest British book retailer WHSmith introduced a standard book number, abbreviated to "SBN" for the first time. The International Organization for Standardization took up these suggestions in 1968, expanded the nine-digit SBN to include a further position to become the "International SBN" (ISBN) and published the ISO 2108 standard in 1972. The national adoption of this standard in Germany is the DIN ISO 2108 standard .

By the end of 2006, the number range of an ISBN had ten digits including a check digit. Since there were difficulties in assigning numbers to new publishers and publications in Eastern Europe and in the English-speaking world, a revised ISO standard for the new 13-digit ISBN was introduced at the beginning of 2005. Old ISBN in ten-digit format are now referred to as ISBN-10 . The number range available for ISBN could be almost doubled from one billion combinations to 1.9 billion. In addition to the approximate doubling of the number range, the compatibility with the system of international article numbers EAN was the most important reason for the changeover. The format of the ISBN-13 was chosen so that the sequence of digits is identical to the corresponding EAN-13 article number.

In 2004, the ISBN Agency for Germany recommended that German publishers indicate both ISBNs on their products in view of the changeover for the transition period. Since January 1st, 2007 only ISBN-13 has been assigned.

Coupling to the system of international article numbers 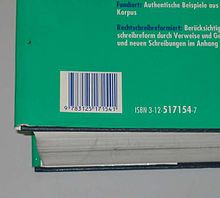 The ISBN system was linked to the system of international article numbers EAN . This means that books can be transferred to inventory management systems worldwide within the EAN system without the need for time-consuming re-labeling with national barcodes . Since the first three digits of an EAN usually stand for the country of registration, e.g. B. "400" to "440" for the German EAN-management, was for books, a " Book Country (Engl." Bookland ")" introduced, so to speak, for "registered in the country of the books". The EAN country numbers 978 and 979-1 to 979-9 are provided for books . (The prefix 979-0 is used by the International Standard Music Number (ISMN).)

ISBN-13 are identical to the EAN-13 that comes with the book, except that the EAN does not contain any hyphens.

ISBN-10 can also be converted into an EAN-13 or ISBN-13 system. To do this, the ISBN-10 is simply preceded by the EAN-digit sequence 978 and the old check digit is replaced by the new EAN check digit to be calculated.

Today the system is referred to as GS1 press code because it is used for other published media (periodicals, CD-ROM) in addition to books.

Rules for assigning and using ISBNs

The ISBN should uniquely identify a non-periodic publication by a publisher ; an ISBN that has already been used should not be used again. New editions or another form of publication (e.g. paperback instead of hardcover ) each require their own ISBN. The only exceptions are unchanged reprints or editions to which only minor changes have been made.

Not every book has an ISBN. In Germany only MVB Marketing- und Verlagsservice des Buchhandels GmbH issues ISBN publisher numbers and individual ISBNs. Neither the ISBN publisher numbers nor the individual ISBNs may be sold or given to another publisher. Since there is no legal obligation to use an ISBN and the allocation involves costs and effort, some small publishers and self-publishers do not need to register an ISBN. The allocation of a single ISBN for (self-) publishers with a foreseeable one-off publishing house production currently costs 79.08 euros.

When issuing a publisher's number, the publisher has to pay a basic fee for the ISBN assignment of 153.51 euros plus shipping costs and obtain a list of all ISBN assignments. The price for this is between 22.61 euros for ten numbers and 3,568.81 euros for 100,000 numbers.

Structure of the ISBN

The ISBN-13 consists of five groups of numbers.

Components of the ISBN

It is coded as follows:

The ISBN must be formatted in one of the following ways in accordance with ISO 2108:

In the context of electronic data processing, use without separators is permitted. The number remains unique even without a separator.

A tool for the correct formatting of an ISBN can be found in the web links .

Formulas for calculating the check digit

To calculate the check digit for the ISBN-13, all twelve digits of the still incomplete ISBN are added, whereby the digits in the even position (i.e. the second, fourth and so on) receive three times the value. A 5 in the sixth position, for example, flows into the term as 15. The last digit is determined from the result of this addition, which is then subtracted from 10. With an addition result of 124, for example, you get 10 - 4 = 6 . That end result is the check digit. If the final result is 10, the check digit is 0. If you designate the first twelve digits with z 1 to z 12 , the following applies to the check digit in the thirteenth position:

calculated: The result must be 0. A bit simpler: The “cross sum”, weighted alternately with 1 and 3 as described, ends at 0.

One can also write:

from which the implementation can easily be written. The (i + 1) mod 2 ensures the alternating weighting of 1 and 3. If the addition is extended to the check digit ( ), the result is 0 if the ISBN is free of errors.

As usual, the running index is counted from left to right. If the result is from 0 to 9, this immediately becomes the check digit; If the formula results in the value 10, an X is used as the last character, which can be interpreted as a Roman number 10.

When checking whether an entered ISBN is correct, the following condition can be checked according to the rules of the modulo calculation.

Example II from above:

Identification numbers for other publications

For other forms of publication, such as B. Periodicals or notated musical works have their own number systems: