There is no clear definition of the term multimedia . The presentation of content through different channels (sound film serves the eyes and ears, for example) is nothing new. The convergence (convergence) of media has preoccupied scholars and publicists since the cinema and to a greater extent since the first successful television broadcast tests. In 1926 the journalist Ludwig Kapeller (1892–1967) wrote:

“The radio of tomorrow: a push of the button and rushing sound, with depths and perspectives; and another pressure: moving image, sound and sound illustrating, a turn of the lever, and England comes, boxing match in London, with cracks of fists and groans of pain, with the quick gestures of the fighters; [...] And the day after tomorrow maybe: the plastic, colored, speaking radio film, capturing experience with all the senses and mastering it through technology, so that millions of people hungry for experience can reveal themselves by pressing the black button. "

The term multimedia came up with the digital conveyance of content. In addition, the availability of different interaction options plays an important role, e.g. B. active navigation , manipulation of content or control of playback parameters. Due to the technical progress of digitization and the increased performance of computers, multimedia experienced a stormy development.

In addition to interactivity, Bernd Weidenmann (2001) names two other properties that media must meet in order to be able to describe them as multimedia. On the one hand, several forms of coding must be used ( multicodality ). Texts, for example, use a symbolic form of coding (verbal), regardless of whether they are printed or spoken. An image, on the other hand, uses a pictorial or imaginary (true to life or schematic / typifying) form of coding. On the other hand, different sensory modalities have to be used ( multimodality ). This means the addressed human senses . The most common senses are the auditory and visual senses. In some cases, it is already possible today to use force feedback technology to address the sense of touch or smell. A text on the computer monitor is thus monocodal (symbolic / verbal) and monomodal (visual). However, if this is accompanied by original sounds (auditory and image / realistic), the properties of multimodality (visual and auditory) and multicodality (image / realistic and symbolic / verbal) are fulfilled. A film is also multimodal (visual and auditory) and mostly also multicodal (pictorial and symbolic).

P. Kneisel (quoted from Steinmetz 1999) has the following definition: “A multimedia system is characterized by the computer-aided, integrated generation, manipulation, display, storage and communication of independent information that is encoded in at least one continuous and one discrete medium. "

Another definition is given by Klimsa (LJ Issing, P. Klimsa: Information and learning with multimedia and Internet. P. 3f):

"..." Multimedia "means numerous hardware and software technologies for the integration of digital media, such as text, pixel images, graphics, video or sound. In addition to this media aspect - multimedia - interactivity, multitasking (simultaneous execution of several processes) and parallelism (related to the parallel media presentation) also play an important role. In this context we can speak of the integration and presentation aspect of the multimedia term. These aspects of the technical dimensions of multimedia understanding must be supplemented by further aspects: those of the application dimension. Only the use of multimedia technology gives concrete form to the term. Not every arbitrary combination of media can be called "multimedia". A personal computer with sound output and a built-in CD-ROM drive is just as little a multimedia system as a CBT program (...) that displays images and graphics in addition to text. In addition to the multimedia technology, the context of use and the functionality of multimedia must certainly always be included in the debate. "

Multimedia communication includes the planning, organization, implementation and control of all measures that are used to send messages that are made up of combinations of text, graphics, sound, image and moving image elements, through electronic media, in order to include to interact with the consumer and to realize the company's communication goals.

New forms of advertising through multimedia

Internet advertising has become more and more important in the course of the modernization of households in recent years. Communicative advertising messages are transmitted via banners and images on websites and also via pop-ups . Internet advertising is also practiced using the results of search engine queries, in that the companies concerned and their products are more likely than others to appear as hits when a query is made. 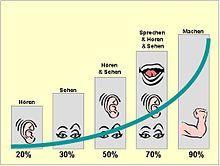 There is a widespread opinion that the use of different media makes it easier for the viewer to acquire knowledge of content, since the user absorbs the information with different sensory organs . This is based on the ostensibly insightful assumption that information is better “stored” if it is communicated via as many “channels” as possible. In this context, graphics appear similar to those presented here, which are intended to illustrate the causal relationship between the learning effect (green curve) and the amount of media.

The psychologist Bernd Weidenmann describes this argument as a naive sum theory that lacks any empirical evidence. The assumption is probably based on a misinterpretation of a statement by the founder of media didactics, Comenius . In his work “E Scholasticis Labyrinthis Exitus in planum” he demanded, among other things: “Schools should also offer everything to the learners' own senses: so that they can see, hear, smell, taste, touch everything that can be seen etc. for themselves and must ” .

It has been empirically proven that there are advantages in learning when information is presented on different channels, e.g. B. a picture + audio contribution. This is justified by the fact that a channel has only a limited capacity. Image + written text would overwhelm the visual channel, while image + audio can be perceived at the same time.

The interactive aspect of multimedia enables the viewer to convey individually tailored knowledge as well as the experience-oriented recording of content. These advantages are particularly developed through learning programs ( e-learning , computer-based training ).