This article deals with the term "climate catastrophe" itself. For information on climate change caused by humans, see Consequences of Global Warming . 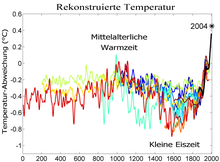 Development of the global mean temperature over the past 2000 years.

In its fourth assessment report , the Intergovernmental Panel on Climate Change cites tipping elements and abrupt changes in the Earth system as possible causes of potentially catastrophic consequences. These include, among other things, a drastic rise in sea level that has persisted over many centuries , pronounced and rapid regional, abrupt climate changes due to a breakdown of the thermohaline circulation , crop failures due to frequent and extreme droughts or the breakdown of the Indian summer monsoon, and possibly rarer but more intense tropical cyclones .

Drastic changes in ocean currents, as well as the fact that the climate is a chaotic system equipped with many feedbacks , can lead to abrupt climate changes. If the warm Gulf Stream were to dry up, Central Europe would cool down considerably, which would lead to crop failures.

Hansen et al. a. 2013 calculate a climate sensitivity of (3–4 ° C) based on a 550 ppm CO 2 scenario, i. That is, he expects an atmospheric greenhouse gas concentration equivalent to a carbon dioxide concentration of 550 ppm, warming of 3-4 ° C. (If you add the greenhouse effect of carbon dioxide with the effect of other greenhouse gases, the concentration of which has been increased by humans, you get a CO 2 equivalent of 485 ppm for 2015. ) The burning of all fossil fuels would reduce the air over the continents on average Heat 20 ° C and the poles by 30 ° C. Most of the earth would become uninhabitable. The scenario of a galloping greenhouse effect ( runaway greenhouse effect ), which would lead to climatic conditions like on Venus and make the earth completely uninhabitable, he regards as being triggered by human activity but not. 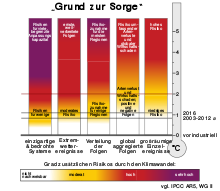 The risk and extent of the consequences of climate change increase with the extent of warming. A warming of more than two degrees is often viewed as dangerous, which is why politicians have decided to limit the warming to two degrees, the so-called two-degree target . With increasing warming, the risk of catastrophic consequences, such as extreme weather events, increases disproportionately. The Stern Report names social upheavals, security risks and migration as possible catastrophic consequences of climate change when the temperature rises by 5 ° C.

The threat of consequences of climate change, which are unlikely but would have catastrophic effects, plays a role in the economic discussion about limiting global warming. Since no experience is available for catastrophic global warming scenarios, damage estimates are not possible. Economic cost-benefit models of climate change do not capture these consequences when calculating an optimal emission path. A climate policy based on such emission paths would not rule out climate catastrophes with sufficient certainty. This is why some scientists, for example Martin Weitzman and, following him, Paul Krugman , suggest that more ambitious climate protection measures should be viewed as insurance against climate catastrophes.

It had been known since the early 19th century that mass extinction had almost always occurred at the borders or transitions of geochronological periods . Until well into the 20th century, these biological crises and catastrophes were mostly explained by sea ​​level fluctuations , continental shifts, and climate and environmental changes. A well-known example is the dying of dinosaurs , about which there are several theories.

In 1956, in the run-up to the International Geophysical Year (1957/1958), Time Magazine referred to warnings from Roger Revelle that sustained CO 2 emissions could have severe effects on the climate in perhaps 50 years' time, and identified the potential for feedback amplification global warming, specifically a global rise in sea level caused by the melting of the Greenland and Antarctic ice sheets , as a "catastrophe". In the 1960s, the first scientific bodies warned that the release of CO 2 was unique in the history of the earth, that stabilizing mechanisms, such as carbon sinks , could reach their limits, and that man-made, ultimately “alarming” processes could be underway. In the 1970s and 1980s, scientific publications increasingly painted the picture of dangerous climate change caused by human greenhouse gas emissions and raised the question of the extent to which measures should be taken to prevent it.

In 2007 and 2010, in the context of increasing reporting on climate change at the UN climate conferences in Bali and Copenhagen, the IPCC's Fourth Assessment Report and Al Gore's film An Inconvenient Truth , the term reappeared a little more frequently in the media but rarely used compared to terms like climate protection or climate change .

The word "climate catastrophe" was chosen as word of the year 2007 by the Society for German Language , because it characterizes "the threatening development that climate change is taking". A media association chose the word as one of the 100 words of the century because it was particularly indicative of the 20th century.

Criticism of the use of the term

Many scientists, even if they see the consequences of global warming as threatening, are reserved about the use of the term in the media for the consequences of global warming. They fear that their research results will be overly dramatized. For specific extreme catastrophe scenarios occasionally depicted in the media, such as the sudden escape of large amounts of methane hydrates and abrupt warming, scientists indicate that, although they cannot be ruled out in the near future, they are unlikely.

As climate deniers used to describe people who deny the human causes and the extent of global warming. Most of them are not climate scientists and consider an imminent climate catastrophe to be unlikely. Examples are Wolfgang Behringer and Fritz Vahrenholt .

A climate catastrophe is the subject of several films, e. B. Waterworld and The Day After Tomorrow , as well as the subject of documentaries such as An Inconvenient Truth and The Age of Stupid .