The Jamaica explorations in October and November 2017 were exploratory talks about the possibility of coalition negotiations between the CDU / CSU ( Union ), FDP and Bündnis 90 / Die Grünen , which began four weeks after the 2017 federal election on October 24, 2017 and shortly before midnight between were declared a failure by the FDP on November 19 and 20, 2017, so that the attempt to form a "black-yellow-green" German federal government for the first time (" Jamaica coalition " or "black traffic light", or "Schwampel" for short) ) was unsuccessful.

After the parliamentary elections next tolerating one was minority government a Jamaica coalition a possible coalition to form a government after Martin Schulz even on election day due to heavy losses after the election a grand coalition had ruled out and announced that the SPD would the strongest faction of the opposition form .

At the end of September, however, the Greens announced at a state council that they would only join this government coalition if core projects of their ten-point plan such as climate protection , social cohesion and social justice became a political focus of a federal government. Exploratory groups were set up at the negotiating parties. The start of the talks was postponed until after the early state elections in Lower Saxony in 2017 .

Black-green-yellow in the federal government is also seen in the press as an alliance of the West German middle class and has a majority almost exclusively in the west of the Federal Republic; Without an emphasis on women's and social policy and compensation for rural areas , based on the experiences of Jamaica in the city of Bonn, Green voters would be expected to migrate to the left, said Katja Dörner , who took part in the exploratory talks .

Press representatives waiting in front of the Konrad Adenauer Haus for the outcome of the exploratory talks, Nov. 2017

The negotiations between the Union ( Angela Merkel and Horst Seehofer ), FDP ( Christian Lindner ) and Bündnis 90 / Die Grünen ( Cem Özdemir and Kathrin Göring-Eckardt ) did not begin until a few weeks after the 2017 federal election . 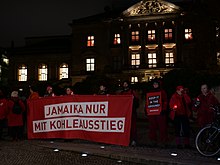 After three "getting to know each other" in a two-person constellation, 52 delegates met for the first time in a large group on October 20 - referred to by the media as the Jamaica Quartet because of the participation of more than three parties : The secretariats of the four parties involved had 12 thematic blocks for the Pre-structured working meetings in the Parliamentary Society . Considerable controversy was seen between the CSU and the Greens, but according to surveys, 83 percent of the citizens surveyed expected that common ground would be sought and compromises would be agreed.

Further exploratory rounds have been set for October 24, 26 and 30 and the first two days in November 2017. The controversial topics of Jamaica were taxes , budget , finances , climate policy , migration , transport policy , domestic policy , security policy , rule of law , agricultural policy and European policy , at times parallel to the world climate conference COP23 taking place in Bonn at the beginning of November and intensely from the media and also from actions of the Civil society accompanied. This was followed by an interim assessment of the explorations and a further round of negotiations that was very detailed in terms of content.

According to the deputy chairman of the Union parliamentary group in the Bundestag, Georg Nüßlein (CSU), who is responsible for environmental policy, the introduction of a national CO 2 price , which was to be combined with a cancellation or reduction of the electricity tax , which was promoted by the FDP and the Greens, failed due to the resistance of the Union.

Explanations for the termination of the soundings

On the night of November 19, 2017, the federal chairman of the Free Democratic Party (FDP) Christian Lindner said: “We know the difficult situation in our country now; and we are also aware of the challenging situation facing the Free Democrats. Such a decision is therefore not made lightly ”and summarized his statement in the sentence“ It is better not to govern than to govern wrongly ”.

Chancellor Angela Merkel and CSU chairman Horst Seehofer then spoke . Angela Merkel explained that one "experienced a lot" and that there were "very different cultures of negotiating styles". You now "regret" it "that we could not find a common solution." In contrast, Seehofer stated that it was "a shame" that "the FDP got out and broke off the negotiations".

According to Lukas Köhler and Ingrid Nestle , one of the reasons for the termination was the disagreement about the extent of the reduction in coal- fired power generation: Reduction of "coal capacity" by only 5 GW , as approved by the FDP at the time, or by 7 GW, as already between the Union and negotiated with the Greens; whereas in the later coalition agreement between the Union and the SPD no reduction target value is listed.

After the exploratory talks were broken off, Federal President Frank-Walter Steinmeier canceled his inaugural visit to North Rhine-Westphalia and, after a meeting at Bellevue Palace with the Executive Chancellor Angela Merkel, reminded the political parties elected in the Bundestag of their responsibility for forming a government; they are committed to the common good : “I expect everyone to be willing to talk”. As a result, the Federal President's Office announced dialogues between the Federal President and the chairmen of all parties, "which could have sufficient programmatic overlaps to form a government". In addition to Angela Merkel ( CDU ), Christian Lindner ( FDP ), Cem Özdemir and Simone Peter ( Greens ) and Horst Seehofer ( CSU ), the chairmen of the remaining parliamentary groups SPD , AfD and Left Party were invited to a dialogue. In addition, Frank-Walter Steinmeier declared that he wanted to consult with the presidents of the four other permanent federal constitutional organs.

The Schleswig-Holstein Prime Minister Daniel Günther (CDU) was disappointed and said that in the end the negotiations had come much closer and the crucial questions had already been clarified. Therefore, the exit of the FDP surprised him very much. His cabinet colleague, the Green Environment Minister Robert Habeck , was also personally disappointed and even suspected that the FDP had a tactical calculation behind the last day of negotiations.

The deputy CDU chairwoman Julia Klöckner tweeted that she would have found it better "if all party leaders could have jointly announced the cancellation". The Junge Union in Düsseldorf demanded that the (managing) Chancellor Merkel resign immediately . The SPD vice-chief Ralf Stegner confirmed that his party was not available for another GroKo . The Greens managing director Michael Kellner assumed that there could be new elections after the failure of the probes. The AfD politician Alice Weidel saw a success for her party with regard to the broken probes: "We prevented black-green." The left demanded a new election , her chairwoman Katja Kipping judged that new elections were the democratically appropriate consequence and they would show that “the Merkel system cannot win a majority”.

The EU Commission President Jean-Claude Juncker had a spokesman say that he was confident that “the constitutional process in Germany [...] ensures stability and continuity”. Russian President Vladimir Putin announced that the process of government formation was being monitored by the Russian government and that it would like to see a successful conclusion soon. French President Emmanuel Macron said it was not in the French interest if the situation in Germany was tense. The Federal Republic plays a central role in Macron's plans for EU reform. Dutch Foreign Minister Halbe Zijlstra warned that it was "bad news for Europe that the formation of a government will take a little longer."

The soundings and the end were often summarized with an allegorical linguistic image in relation to the island of Jamaica : "Just off the coast of Jamaica, possibly even when entering the port, the steamer capsized with the explorers on board." ... "The trip to Jamaica - past, stranded on the reef ... ”(Tagesspiegel). The failure of the talks was often briefly referred to in the media as " Jamaica-Aus ".

At the end of 2017, the Society for the German Language selected the word “Jamaica-Aus” as Word of the Year 2017.