President of the European Commission

The European Commission logo at the entrance to the Berlaymont building (stylized reference to the building).

After the nomination, the newly elected European Parliament questions the candidates in detail and issues an opinion, which the Commission as a whole (but not individual Commissioners) can accept or reject. After Parliament has given its approval, the Commission is appointed by the European Council by qualified majority. 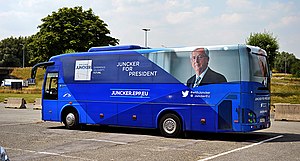 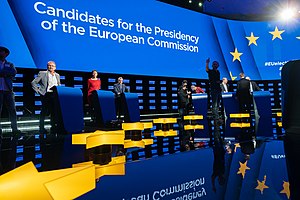 In the European elections in 2014 , most of the European party families for the first time put up official “Spitzenkandidaten” in order to illustrate the influence of voters on the most important office in the EU. Intergroups agreed that Parliament would not accept any proposal for the Commission Presidency that had not previously run as a top candidate. Accordingly, the top candidate of the strongest party, Jean-Claude Juncker ( EPP ), was elected president. There were efforts in the EU Parliament to make this Spitzenkandidaten principle binding in EU electoral law.

After the European elections in 2019 , however, contrary to this principle, the European Council did not nominate any of the official top candidates of the European party families, as there was no majority for any of the candidates despite weeks of deliberations. Although the European People's Party had become the strongest parliamentary group, its top candidate Manfred Weber encountered strong headwinds among the heads of government: In addition to Hungary and Poland (who disliked his previously tough line against their right-wing conservative governments), in particular, French President Emmanuel Macron , who Weber soon followed had publicly described the election as unsuitable: On the one hand, Macron did not trust him to implement his initiative for Europe , and on the other hand, he doubted the personal suitability of Weber, who had never held a government office and does not speak French. Instead, the European Council finally proposed Ursula von der Leyen to the European Parliament , who, although she also comes from the EPP (and from Germany), had not stood as a candidate in the EU election. This has been seen by some commentators and groups in the European Parliament as a democratic step backwards. Many MPs (especially from the ranks of the Greens, but also the German SPD) then refused to support her, pointing out this fact. Nevertheless, after long consultations with the parliamentary groups, in which von der Leyen also promised to revive the revised top candidate principle, it was elected with a narrow majority on July 16, 2019. In retrospect, some observers also assessed the outcome of the process as a consequence of the European Parliament's inability to signal a clear majority for one of the top candidates, unlike in 2014. Instead, all the major factions had insisted on their own candidate until the end, effectively taking themselves out of the game.

The powers of the early Commission presidents differed from those of today in a number of areas. At first he was only primus inter pares within the commission ; he chaired the meetings, but had no policy authority and could not dismiss the other commissioners. The Commission's decisions were generally based on the principle of collegiality . In addition, the term of office of the Commission and its President was not contractually defined; instead, they were each appointed by the Council of Ministers for an ad hoc period . The European Parliament was initially not involved in the selection of candidates.

Despite their formally less competencies, the first commission presidents had a great influence. Often it was a question of prominent personalities who were seen as representatives of the European idea of ​​unification and a European common good above national interests. The first President of the High Authority of the ECSC was Jean Monnet , who himself had played a key role in the Schuman Plan for the establishment of the ECSC. The first president of the EEC Commission was Walter Hallstein , who, as confidante of Konrad Adenauer and State Secretary in the Foreign Office, had played a central role at the Messina Conference . In the mid-1960s, however, conflicts arose between the European federalist- oriented Hallstein and the French President Charles de Gaulle, who was more concerned with preserving national sovereignty, about the further development of European integration. As Hallstein ultimately did not find the support of the other heads of state and government in the ensuing crisis of the empty chair , he resigned from his office on June 30, 1967.

Jacques Delors had a decisive influence on the office

Only after 1984 did the Commission regain a more important role, with Commission President Jacques Delors (1985–1995) playing a central role. Among other things, he initiated the project to complete the European single market by 1993 and proposed the so-called Delors Plan , which laid the basis for the European Economic and Monetary Union agreed in the Maastricht Treaty in 1992 .

However, the Commission Presidents who followed Delors could not continue his impetus for a more active role for the European Commission. As the successor to the French Delors, the Dutch Prime Minister Ruud Lubbers was initially discussed in 1994 (with British support) (a socialist politician from a large member state should now be followed by a representative of the Christian-Democratic party family, also from a smaller member state). However, Lubbers was rejected by the German side at the relevant personnel consultations in the European Council. The alternative proposal by Chancellor Kohl, the Belgian Prime Minister Wilfried Martens , then failed u. a. at the British veto. The heads of state and government represented in the European Council finally agreed on the compromise candidate Jacques Santer , the Luxembourg Prime Minister.

In 1999, after Jacques Santer's rather lackluster tenure, which ultimately failed due to the corruption scandal surrounding French Commissioner Édith Cresson , the former Italian Prime Minister Romano Prodi was elected President of the Commission. This and his successor, José Manuel Barroso, who was elected in 2004 (since 2004), are often considered to be rather weak Commission presidents.

The appointment of Romano Prodi's successor in 2004 was particularly interesting because important national governments led by social democrats (e.g. under Gerhard Schröder , Tony Blair and José Luis Rodríguez Zapatero ) faced a clear majority of the conservative European People's Party in the 2004 European elections . Although the European Council was not yet formally obliged to take into account the election results under the EU Treaty, the liberal Belgian Prime Minister Guy Verhofstadt and the social democratic EU foreign affairs representative Javier Solana , who were temporarily traded as candidates, were considered hopeless from a party-political point of view. After various promising candidates close to the EPP (including the Dutchman Jan Peter Balkenende , the Luxembourgish Jean-Claude Juncker and the Austrian Wolfgang Schüssel and the conservative British foreign commissioner Chris Patten ) had rejected a candidacy, the CDU chairwoman, who was influential in the EPP, suggested Angela Merkel presented the Portuguese Prime Minister José Manuel Barroso as a candidate, who then found the greatest approval.

In the run-up to the 2009 European elections , a campaign was launched for the candidates for the office of Commission President to be pre-nominated by the European parties in order to offer voters a visible alternative and to reduce the “candidate poker” after the election. This campaign was supported by the Union of European Federalists (UEF) and its youth organization JEF , among others . However, only the EPP announced that it would support a renewed candidacy for Barroso; none of the other parties presented a presidential candidate. At a PES party council meeting, Poul Nyrup Rasmussen's candidacy was discussed, but it failed because of resistance from the social democratic ruling parties in Spain, Portugal and Great Britain, who wanted to hold onto Barroso. It was only after the election that Barroso's re-election, proposed by the European Council, came under heavy criticism, especially from the Greens and the Social Democrats , but also the Liberal factions in the European Parliament . They brought alternative candidates like Guy Verhofstadt into the discussion, but without a majority in favor. After Barroso made concessions to the Social Democrats and Liberals, he was finally confirmed by the European Parliament in September 2009.

Presidents of the High Authority of the European Coal and Steel Community :

President of the Commission of the European Atomic Energy Community :

President of the Commission of the European Economic Community : 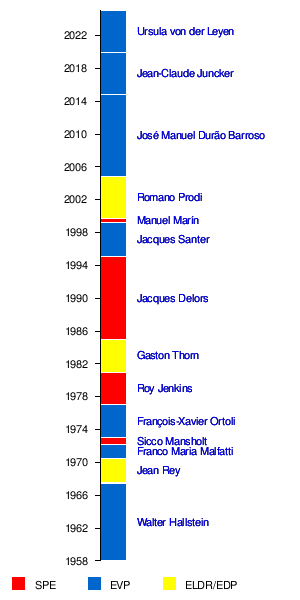 Responsibilities of the members of the European Commission