EWG is a redirect to this article. Further meanings are listed under EEC (definition of terms ) .

Founding members of the EEC

European Economic Community ( EEC ) was the name of an association of European states. The goal was European integration through a common economic policy . On March 25, 1957, the EEC was founded by Belgium , France , Italy , Luxembourg , the Netherlands and the Federal Republic of Germany .

At the same time, Euratom was founded for cooperation in the field of nuclear energy. The two treaties are called the Treaties of Rome . Then there was the European Coal and Steel Community , which had existed since 1952. Together they spoke of the three European Communities. The EEC became by far the most important of these. However, they had already had the same organs since 1967.

The Maastricht Treaty was signed on February 7, 1992 . It came into force on November 1, 1993. He renamed the EEC, which in the meantime had received additional tasks, to the European Community (EC). On December 1, 2009, the Lisbon Treaty entered into force. As a result, areas of cooperation that did not belong to the EC were also integrated. This is how today's European Union came into being .

The European flag , official symbol of the EEC from 1986

The idea of ​​creating a common market goes back to the time of the failed EVG contracts in 1952. Various European politicians such as Jean Monnet , the Belgian Foreign Minister Paul-Henri Spaak and his Dutch counterpart Willem Beyen were instrumental in reviving the European idea. They saw the best possibility of European cooperation in the economic field, since after the rejection of the EDC by the French National Assembly (August 30, 1954) this form of European cooperation in the military and political field had initially failed.

At the Messina Conference in June 1955, the Foreign Ministers of the ECSC decided on a general economic unification of the national economies, the creation of joint supranational institutions, social harmonization through the implementation of general social standards and cooperation in the nuclear sector. At the Messina Conference it was decided to set up a government committee chaired by Paul-Henri Spaak (“ Spaak Commission ”) to work out the foundations and possibilities of the common market (question of including various economic sectors). There were different currents within the German federal government ; two dominated:

An agreement was also reached on the civilian use of atomic energy ( Euratom ). The negotiations on the common market were influenced by the Hungarian uprising (1956) and the Suez crisis ; these made the heads of government vividly aware of the need for European cooperation. The treaty establishing the European Economic Community (EEC Treaty) and that of the European Atomic Energy Community (EAEC Treaty / Euratom) were signed on March 25, 1957 in Rome by the six members of the Coal and Steel Community - France , Italy , the Federal Republic of Germany , Belgium , the Netherlands and Luxembourg - signed ( Treaty of Rome ). On January 1, 1958, the treaties came into force; Walter Hallstein became the first President of the EEC Commission.

On January 1, 1961, there was a first partial adjustment of the national tariffs of the EEC states with the aim of a uniform external tariff . The implementation of the customs union and the introduction of a common external tariff took place on July 1, 1968. In June 1961 an association agreement between the EEC and Greece was signed.

On January 14, 1963, the French President de Gaulle spoke out against the UK joining the EEC. His veto surprised the EEC Commission and the five other member states.

On January 29, 1963, membership negotiations between the EEC and the United Kingdom were broken off. On July 20, 1963 the Yaoundé Agreement (an association agreement between Francophone African states and Madagascar with the EEC) was signed and on September 12, 1963 with Turkey . On April 8, 1965, an agreement was signed to set up a joint council and a joint commission of the European Communities ("Merger Agreement ") ; the executive bodies of the European Communities (ECSC, EEC and Euratom) were thus merged.

On December 1 and 2, 1969, the heads of state and government of the EC (in the meantime Georges Pompidou was French President) at their summit in The Hague passed resolutions on accelerated integration, the introduction of an economic and monetary union (EMU) by 1980 and political Cooperation and the opening of accession negotiations with Denmark, the United Kingdom, Ireland and Norway. These negotiations began on June 30, 1970. In a referendum in September 1972 , 53.5 percent of those who voted refused to allow Norway to join the EEC. Denmark, the United Kingdom and Ireland joined on January 1, 1973.

In 1993 the Treaty of Maastricht renamed the EEC to the European Community (EC) and was one of the three pillars of the European Union . The other two pillars concerned internal and external security. Cooperation was organized differently in these areas, so the European Parliament had little say. However, only the EC had legal personality.

The following table shows all states that belonged to the European Economic Community before it was renamed European Community (November 1, 1993). 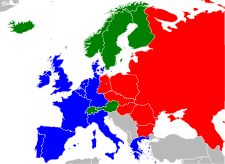