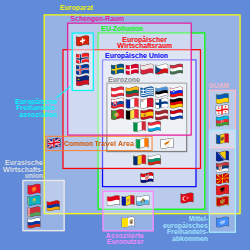 The European law is the law on state in Europe .

The term is considered to be "the conceptual umbrella for several legal systems ( international organizations ) that are interwoven in many ways", and "in terms of history / politics - as well as EC / EU - are part of the European unification ".

As the EU's intended accession to the ECHR of the Council of Europe according to Article 6 of the EU Treaty shows, no clear and consistent separation can be drawn between the two regimes of European law. (European) integration as “condition, process and goal” is an evolving process that is subject to constant change. The European law underlying subject matter is Europe is and will remain for the time being a "construction site".

European law in the narrower sense

Union law is differentiated from international law (and the associated European law in the broader sense) in particular by two peculiarities that affect its relationship to the national law of the member states: its partially direct applicability in the member states without a national transposition act and the priority of Union law over national law . Union law is a supranational legal system of its own that is to be classified as supranational, but not as ordinary international law . The correct term since the Lisbon Treaty has accordingly been Union law, while Community law has only historical value.

Strictly speaking, these statements do not apply in the area of ​​the Common Foreign and Security Policy (CFSP). It is more organized under international law; this is particularly evident in

European law in the narrower sense consists of primary law and its subordinate secondary law; The case law of the European Court of Justice is of particular importance .

Primary law is the central legal source of European law in the narrower sense. It consists of the agreements concluded between the member states (founding, revision and accession agreements). The member states continue to have the "constituent power" and are therefore referred to as "masters of the treaties". The most important primary law treaties today are the Treaty on European Union (EU Treaty) and the Treaty on the Functioning of the European Union (FEU Treaty), also known as the Treaties (Art. 1 (2) sentence 1 TFEU). In addition, the Treaty establishing the European Atomic Energy Community (Euratom Treaty) is still in force. Primary law also includes the protocols attached to these contracts, which regulate very specific issues, but are considered to be legally equivalent to the TEU / TFEU provisions “as part of the contracts” (Art. 51 TEU).

In the course of European integration , these treaties were changed several times; the most important changes to the contract were: 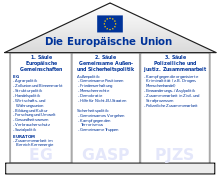 The three pillars of the European Union

The most fundamental treaty change was the establishment of the European Union in the Maastricht Treaty . The European Union rested on three pillars or pillars. The first pillar consisted of the European Communities : the Communities exercised sovereignty delegated by the Member States in certain policy areas; therefore one spoke here of supranational areas (politics). The second and third pillars comprised police and judicial cooperation in criminal matters and the common foreign and security policy ; these areas are organized on an intergovernmental basis, i. In other words, the European Union has no sovereignty in these areas.

The economic constitution is geared towards the creation of the European internal market: The fundamental freedoms (freedom of movement of goods, services, people and capital) are intended to protect cross-state market economy activities from restrictions; For individual subject areas (in particular agricultural policy , transport and energy supply) there are special regulations that take into account the traditionally strong regulation of these areas by the Member States.

The FEU Treaty also contains important regulations on competition law : The Commission is granted control rights in the field of competition law in the narrower sense, in cartel law and state aid law.

A third area of ​​the European economic constitution consists of the provisions on economic and monetary union . In order to establish the monetary union, convergence criteria were set up, which are continuously checked. Economic union is also reflected in the provisions governing the regional and structural policies of the Community, the funds of which are intended to contribute to the economic and social coherence of the Member States.

The competencies of the European Union have peculiarities compared to the nation state: The community lacks comprehensive sovereignty; the “ principle of limited individual authorization ” applies ( Art. 5 Para. 2 EU Treaty ). Nevertheless, some competences - in particular the competences for legal alignment ( Art. 114 and 115 TFEU ) and the rounding off competence ( Art. 352 TFEU) - are very broad. The Maastricht Treaty therefore introduced the principle of subsidiarity : on the basis of the principle of subsidiarity, the European Union can now only act if uniform regulation is required and the planned goals can be better achieved together ( Art. 5 (3) EU Treaty).

The competences of the Community, which are now competences of the Union, were increasingly supplemented in the course of European integration, starting with the Single European Act (EEA). Examples of newly introduced competencies as of July 1, 1986 (EEA) are research and development policy, the policy of economic, social and territorial cohesion, environmental policy and cultural policy. The subsequent revision treaties (Maastricht, Amsterdam, Nice and most recently Lisbon) have continuously expanded these competencies by adding further policies.

The regulations on external relations concern, on the one hand, foreign trade relations and, on the other hand, other foreign policy. The former falls within the competence of the Community ( Art. 207 , 216 ff. TFEU ); this is part of the provisions of the EU Treaty ( Art. 11 ff. EU Treaty).

In the context of the common commercial policy, the relationship between European law and GATT in particular is unclear.

Due to the importance of unwritten primary law, the role of the European Court of Justice in the development of European law can hardly be underestimated. From a formal point of view, it is responsible in the highest instance for the review of legal acts of secondary law on primary law and the review of the law of the individual member states on European law (primary and secondary law). Proceedings can in particular be initiated by the institutions of the European Union , the Member States, the courts of the Member States or individuals.

In fulfilling this task, the European Court of Justice has in many cases not limited itself to an interpretation of primary law, but has made a significant contribution to the legal order of the European Communities through judicial training. Examples include the case law on the Community legal system as a sui generis legal system ( van Gend & Loos ), the primacy of Union law over national law ( Costa / ENEL ) and the development of Community fundamental rights ( Stauder ). These and other cases have a decisive influence on the character of European law. This great importance of jurisprudence justifies speaking of a case law system , at least in certain areas .

Some of the principles developed in case law found their way into codified primary law in subsequent treaty amendments. For example, the fundamental rights recognized by European law have now been written down in the EU Charter of Fundamental Rights and incorporated into primary law with the Treaty of Lisbon via Article 6 (1) of the EU Treaty .

Secondary law (law derived from primary law) is the legal acts enacted by the organs of the European Union or the European Atomic Energy Community on the basis of primary law.

Secondary law must not violate primary law. In the event of a violation of primary law, the European Court of Justice can declare secondary law null and void.

For the individual types of procedure see: Legislation of the European Union

Legal acts not mentioned in Art. 288 TFEU are international treaties and so-called unspecific resolutions concluded by the Union.

European law in the broader sense

These agreements are international agreements between the participating states. Their law therefore only entitles and obliges the states themselves, but does not in itself produce any direct legal effect within the domestic legal systems; this requires a national (constitutional) validity norm (for example Art. 93 of the Dutch Constitution) or a state implementation act. This distinguishes them from European law in the narrower sense, which, according to the principle of priority of application of Union law, can also be applied directly without a member state implementation act (e.g. EU regulations and possibly also EU directives ).