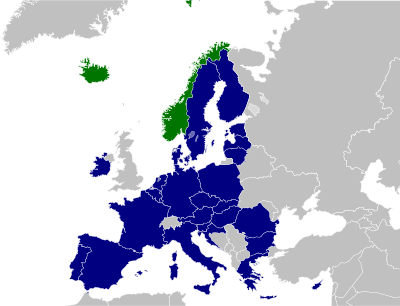 * The Agreement on the Participation of the Republic of Croatia in the European Economic Area , which amends the main part of the EEA Agreement so that the Republic of Croatia becomes a party to the EEA Agreement, has not yet entered into force, but is due to an agreement on the provisional application of the Convention provisionally applied from April 12, 2014.

The European Economic Area ( EEA ) is a utility room an in-depth free trade zone between the European Union and the European Free Trade Association (EFTA).

EEA-wide, the four freedoms of movement of goods , persons , services and capital apply in particular , with special regulations for agricultural goods . Third country goods remain excluded by rules of origin. With around 520 million inhabitants (of which around 505 million were in the EU) from the Arctic to the Mediterranean and an annual economic output of over 19.2 trillion US dollars (as of 2018), it was the largest economic zone in the world. Around half of world trade takes place in the European Economic Area . The EEA Council is tasked with implementing the EEA Agreement and monitoring its provisions.

Already when the EFTA was founded in 1960, regulating the relations between the European Economic Community (EEC) and the EFTA member states was one of the goals of the organization. After the EFTA countries Great Britain and Denmark joined the European Communities together with Ireland in 1973 , a close cooperation developed between the EFTA countries and the EEC. A first important stage was reached when the EFTA states individually concluded free trade agreements with the EEC between 1972 and 1977 .

From the mid-1980s, the degree of economic integration within the EU increased, thanks in particular to the implementation of the internal market program (realization of the four freedoms: free movement of people, goods, services and capital). In 1984 the establishment of a European Economic Area was discussed at a joint ministerial meeting of the EEC and EFTA in Luxembourg (see also European Free Trade Association ) .

After the EC members had laid down the implementation of the goal of an “area without internal borders” by 1992 in the Single European Act , in 1989 EC Commission President Jacques Delors suggested that the seven EFTA states should participate as widely as possible in the EU internal market to enable. In 1990 concrete negotiations began, which ended on May 2, 1992 in Porto with the signing of the Agreement on the European Economic Area (see also European Free Trade Association # 1989-95: EEA and second EC expansion to the north ) .

The contracting parties were the twelve former member states of the European Community (Belgium, Germany, France, Italy, Luxembourg, the Netherlands, Great Britain, Denmark, Ireland, Greece, Spain, Portugal) as well as the seven EFTA states Austria, Finland, Iceland, Norway and Sweden , Switzerland and Liechtenstein. With the exception of Switzerland, all EFTA states have ratified the EEA Agreement, which entered into force on January 1, 1994, but not until May 1, 1995 for Liechtenstein.

British participation in the EEA Agreement (and all other EU external treaties) will continue during the transition period.

The EEA is a deepened free trade area. Furthermore, the EEA Agreement contains competition and some other common regulations, as well as “horizontal” provisions in connection with the four freedoms (social policy, consumer protection, environment, statistics, company law). Furthermore, the relevant secondary law adopted by the EU is adopted for the EEA . EEA law should also be interpreted as “EU-compliant”.

In the EEA, tariffs between Member States have been abolished and around 80% of EU internal market rules apply. However, it is not a customs union with a common customs tariff . Furthermore - unlike within the EU - excise taxes are to be paid on import . Nevertheless, due to the applicability of a large number of harmonization provisions, the EEA is more than a simple free trade area .

For the EEA countries that are not members of the EU, the EEA Agreement and the related regulations are monitored by the EFTA Surveillance Authority and the EFTA Court of Justice . The European Commission and the European Court of Justice are responsible for the EU member states . In this context, one speaks of the “two-pillar structure”. The EEA Agreement is regularly adapted to the development of the relevant EC law (so-called acquis communautaire ). A resolution by the EEA Joint Committee is necessary for this. Since the EEA states send representatives to the expert groups of the EU Commission, they can at least actively participate in the development of the legal provisions in advance.

The EEA treaty assigns tasks to several bodies that have legislative, executive, judicial or advisory functions.

The EEA Council is composed of the representatives of the governments of the member states . It develops guidelines which ensure the implementation of the contractual objectives and which must be observed by the member states. The EEA Joint Parliamentary Committee consists of members of the European Parliament and the parliaments of the EFTA countries. It can express its views in the form of reports or resolutions.

The EEA Joint Committee monitors the implementation of the Treaty by the Member States. In the EU states this task is also the responsibility of the European Commission , in the EFTA states the EFTA monitoring authority .

In the Consultative Committee representatives meet together stakeholders from the Member States. It only has an advisory role.

Implementation in the contracting states

Finland , Sweden and Austria joined the EU on January 1, 1995. The provisions of the EEA Treaty only came into effect between these countries and the other EU member states from January 1, 1994 to December 31, 1994, after which the EU Treaty took precedence.

The Switzerland has not the only EFTA State the multilateral EEA Agreement ratified after a narrow majority of Swiss citizens and a clear majority of the cantons the participation of Switzerland on 6 December 1992 in a referendum had rejected ( vote result ). Switzerland has observer status in EEA bodies. This enables the confederates to follow the development of EEA and EC law closely. In addition, Article 128 of the EEA Agreement gave Switzerland the option of joining at any time.

The Swiss government pursued since then bilaterally their destination, the country economically to the four freedoms to share with the EEA. In contrast to the EEA Agreement, there are only two negotiating partners in the bilateral negotiations (EU Commission and Swiss government), which enables more specific regulations for Switzerland. Negotiations on sectoral bilateral agreements were started two years after the EEA No, and in 1999 seven bilateral agreements were signed between Switzerland and the European Union , which came into force on June 1, 2002. In 2004, a second package of sectoral agreements (Bilaterals II) was signed, the entry into force of which ended with the actual abolition of personal border controls at Swiss land borders at the end of 2009 (goods controls remain in place). The Council of the European Union decided in December 2012 that there would no longer be any new bilateral agreements based on the model of the previous agreements with Switzerland.

One week after the Swiss “No”, the Liechtenstein people approved membership. The ruling prince had already spoken out in favor of the EEA agreement. Since Liechtenstein also belongs to the Swiss economic area and forms a currency and customs union with Switzerland , the EEA Agreement had to be revised with regard to this overlapping situation, and the Treaty of March 29, 1923 on the connection of the Principality of Liechtenstein to the Swiss customs area was amended . The adaptation protocol to the EEA Agreement received the approval of the people of the Principality of Liechtenstein on April 9, 1995, so that the Agreement for Liechtenstein could come into force on May 1, 1995. However, the EEA Agreement applies to fewer goods for Liechtenstein than for the other member states; this restriction, which was originally limited to January 1, 2000, was initially extended to January 1, 2005, and before this date was reached, it was made permanent from this date.

On July 25, 2007, the member states of the EEA, Bulgaria, Romania and the European Union signed an agreement on the participation of the Republic of Bulgaria and Romania in the European Economic Area. It came provisionally into force on August 1, 2007 and in full on November 9, 2011.

This article or section needs revision: Illegible
Please help improve it , then remove this checkmark.