This article deals with the Council of Europe (CoE / CdE) . This is not to be confused with the EU institutions European Council or Council of the European Union (also known as the EU Council of Ministers ).

The Council of Europe is a forum for debates on general European issues. Its statute provides for general cooperation between the member states to promote economic and social progress.

"The task of the Council of Europe is to bring about a closer union among its members."

- Statute of the Council of Europe, Article 1

In May 2007, the EU and the Council of Europe signed a Memorandum of Understanding (MoU) as a political declaration of intent . 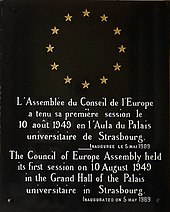 The Council of Europe was founded by ten northern and western European countries. It received its formal statute on May 5, 1949 from Belgium , Denmark , France , Ireland , Italy , Luxembourg , the Netherlands , Norway , Sweden and the United Kingdom in the London Ten Power Pact . It is the oldest originally political organization of European states. It was founded by the European Conference on Federation at the instigation of the American Committee for a United Europe .

In addition to the economic OEEC (merged into the OECD ) and military cooperation within the framework of NATO , the political unification of the continent took on concrete forms with the Council of Europe.

With three exceptions, all European states now belong to the Council of Europe. The Vatican City State does not, as such relations with other States, but leaves its international representation to the Holy See - the latter has a non-state subject of international law observer status in the Committee of Ministers. Belarus has been a candidate country since 1993. The admission of Kosovo will only be considered once its status has been clarified under international law. Until then, Kosovo has been granted observer status since April 2013 by two representatives of the Kosovar parliament, who can take part in the debates of the plenary sessions and in the work of the committees without voting rights.

After the controversial vote on the membership of Crimea in Russia , the Council of Europe provisionally withdrew the 18 Russian MPs from voting in April 2014 with a majority of 145 votes, 21 against and 22 abstentions. In addition, Russia is excluded from the governing bodies of the assembly until further notice, whereupon the Russian MPs boycotted the meetings of the assembly and Russia also suspended payment of its membership fees from June 2017 until further notice.

Because the withdrawal of voting rights was not regulated in the statutes of the Council of Europe and after two years without contributions the final expulsion of Russia and an election of the next Secretary General of the organization without Russian members in the Parliamentary Assembly threatened, the Council of Ministers decided on May 17, 2019 on the initiative the Finnish Presidency to introduce a new multi-stage procedure for sanctions against members in order to pave the way for Russia's full membership again.

Monument for human rights in front of the European Palace

The Council of Europe is a forum for debates on general European issues. In its framework, intergovernmental, binding international agreements ( Council of Europe conventions , such as the European Convention on Human Rights ) are concluded with the aim of preserving the common heritage and promoting economic and social progress.

Since 1993 the Council of Europe has devoted itself more and more to safeguarding democratic security . These include in particular:

Organizationally, the Council of Europe largely follows the usual structural pattern of international organizations, but with the notable addition of a parliamentary body.

Committee of Ministers and Parliamentary Assembly

The President of the Parliamentary Assembly from January 2016 was Pedro Agramunt . In April 2017, the Bureau withdrew his confidence and no longer allowed him to travel, comment, or represent the congregation on behalf of the congregation. As a result, the post was effectively vacant. However, it was only possible to deselect it through a rule change. A few days before the scheduled vote, Agramunt announced his resignation on October 6, 2017, and his deputy, Roger Gale , became the executive successor .

The Council of Europe is politically represented by the Chairman of the Committee of Ministers and the President of the Parliamentary Assembly.

The Congress of Local and Regional Authorities forms the third pillar of the Council of Europe alongside the parliamentary assembly and the Committee of Ministers and is an advisory body.

The Council of Europe has established the position of Commissioner for Human Rights. This is elected by the Parliamentary Assembly and prepares reports on relevant topics or the human rights situation in individual countries.

General Secretaries of the Council of Europe

Council of Europe building in Strasbourg

The Council of Europe's criticism is directed against, among other things, undemocratic elections, the death penalty and, in particular, the death sentences of Eduard Lykow (probably executed at the end of 2014) and Alexander Grunow . In a referendum held in Belarus in 1996, however, over 80 percent of the Belarusians who voted were in favor of the use of the death penalty.

The government of Belarus intends to grant special guest status. The opposition advocates membership of the country, which would give Belarusian civil society access to an independent legal system (European Convention on Human Rights, European Court of Human Rights).

Such additions (The Congress / Le Congrès) to the Council of Europe logo can be found among others. a. also used in public relations (newer, further examples: coe.int ... youth ... )

The European Convention on Human Rights (ECHR) of 1950 is the most important multilateral treaty within the Council of Europe; there are also 14 protocols to the ECHR to date. Overall, the Council of Europe has turned to "individual concrete measures in which the ECs / EU do not develop any activities".

The more than 170 Council of Europe agreements include:

The Secretary General Thorbjørn Jagland , who was active from 2009 to 2019 , announced a reform of the Council of Europe. In 2010, the organization should aim to “focus on its core tasks of human rights, democracy and the rule of law”. Obviously it is difficult to make any headway because the same letters of intent are repeated year after year. Eight years later, the Federal Government's report on the activities of the Council of Europe in the period from January 1 to December 31, 2017 , said unchanged in terms of content and hardly changed in language: "Secretary General Jagland wants to continue his reform and consolidation course and focus more on the work on the content Align core tasks with human rights, the rule of law and the promotion of democracy. "

Criticism of the position of the Council of Europe

Human rights groups like Human Rights Watch accuse the Council of Europe that it is reluctant to name violations of human rights in member states, including Azerbaijan , and that it does not disclose election fraud in the same way as the Office of Democratic Institutions and Human Rights ( ODIHR) of the Organization for Security and Cooperation in Europe .

In June 2019, the Parliamentary Assembly of the Council of Europe decided to return the voting rights that had been withdrawn five years earlier to the Russian Federation. Otherwise, according to the statutes, Russia would have been excluded due to non-payment of contributions, which various other member states under the leadership of Secretary General Thorbjørn Jagland wanted to prevent. To this end, according to observers in the Tagesspiegel , the council allowed itself to be “blackmailed” or, according to the Neue Zürcher Zeitung , gave in to the pressure of an “authoritarian state”. The Council made far-reaching concessions to Russia, such as excluding the Lithuanian Andrius Kubilius, who was unwelcome in Moscow, from running for General Secretary of the Council, working out high hurdles for sanctions against Russia and not demanding any assurance that Russia will refrain from provocation, politicians from the occupy Crimea to send to the council.

In April 2018, an independent expert commission made up of former judges came to the conclusion that there were strong indications of corruption among several active and former members of the Council of Europe. The people had apparently taken positions in favor of Azerbaijan in return for donations and tried to prevent or mitigate declarations of disregard for human rights in Azerbaijan. Several people were named, including the former President of the Parliamentary Assembly of the Council of Europe, Pedro Agramunt , and the former MEPs Eduard Lintner and Karin Strenz ( Member of the Bundestag ).

40 years of the Council of Europe: German postage stamp from 1989

Example of specific work by the Council of Europe

EU and Council of Europe