from Wikipedia, the free encyclopedia
This is the spotted version , flagged on June 29, 2019 . There is 1 pending change that has yet to be viewed.

Listen to Paul Henri Charles Spaak ? / i (born January 25, 1899 in Schaerbeek / Schaarbeek near Brussels , † July 31, 1972 in Braine-l'Alleud ) was a Belgian politician and statesman who held important positions in international organizations . He is considered one of the founding fathers of the European Union . 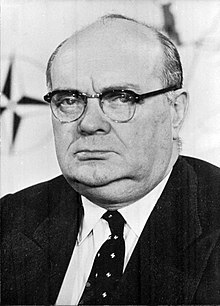 Paul-Henri Spaak was the grandson of the liberal politician Paul Janson and nephew of another Liberal, Paul-Émile Janson , who was Prime Minister of Belgium from 1937 to 1938. His father was Paul Spaak and his mother Marie Janson was the country's first female senator. During the First World War he gave his age incorrectly in order to be allowed to join the army. He fell into German captivity and was only released after two years.

Paul-Henri Spaak had three children: Antoinette Spaak , Fernand Spaak and Marie M. Spaak , who was married to Michael Palliser . He is a brother of screenwriters Charles Spaak and Claude Spaak .

Spaak studied law at the Université Libre de Bruxelles , a non-Catholic university, and in 1920 became a member of the Parti Ouvrier Belge (POB) / Belgische Werkliedenpartij (BWP) . In addition to his work as a lawyer, he worked from 1925 as the office manager of the socialist labor minister Joseph Wauters . In 1932 he became a member of his party for the first time. In 1935 he became Minister for Transport and Post in the Paul van Zeeland government . For the first time in 1936 he was a member of the government of his country as foreign minister . In 1938 he became Prime Minister for the first time and held this office until the German invasion in 1940. During World War II , Spaak was Foreign Minister of the government- in- exile in London between 1940 and 1944 . In the course of his political career, he was a number of foreign ministers and three prime ministers of Belgium.

While Spaak campaigned for Belgium's neutrality policy from 1936 and thus tried to keep his country out of the impending war, after the German attack on Belgium and France he felt obliged to provide mutual military support to France and Great Britain. During the German attack in the spring of 1940, the Belgian army held out along the Belgian-French border river with British-French support and enabled the British-French forces to withdraw from Dunkirk . Until recently, Spaak tried to win the Belgian King Leopold III. to persuade to flee to an unoccupied foreign country, but the king resisted. In violation of his constitutional rights, the Belgian King Leopold III. the army ordered to cease fire and signed the surrender to the German generals. From his exile in London , Spaak supported a policy of regional cooperation and common security and thus also the customs union established in 1944 between Belgium, the Netherlands and Luxembourg , which became the cornerstone of cooperation between the Benelux countries.

In July 1950 King Leopold III wanted. - who was discredited by his behavior during the war, especially in Wallonia - to return to the throne and oust his brother, Prince Karl , who was appointed regent by both houses of the Belgian parliament in 1944, and who was also absolutely impeccable in the eyes of the Allies . During the trial of strength, which lasted several weeks and was sometimes bloody due to mass demonstrations and strikes, Spaak became one of the main opponents of Leopold's return.

Deeply shaped by the experience of the Second World War , Spaak was committed to European and international unification: on January 10, 1946, he was elected President of the first UN General Assembly of the United Nations in London . During the third session of the UN General Assembly in Paris , Spaak addressed the Soviet delegation with the famous words: "Messieurs, nous avons peur de vous" (Gentlemen, we are afraid of you).

In 1949 Spaak became chairman of the parliamentary assembly of the Council of Europe ; he resigned from this office two years later. Between 1950 and 1955 he was head of the International Council of the European Movement.

Paul-Henri Spaak was also Mayor of Saint-Gilles / Sint-Gillis from 1953 to 1957 . He retired from politics in 1966, but took over the office of President of the Atlantic Treaty Association until 1969 .

During a vacation in the Azores in the summer of 1972, he fell ill and died a short time later in the hospital in Braine-l'Alleud near Brussels. 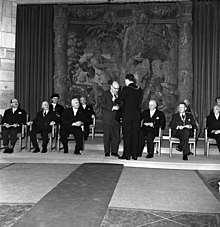 Awarded the Charlemagne Prize in 1957

In 1969 he published his memoirs under the title Combats inachevés (Unfinished Battles, 2 volumes).

President of the European Movement International