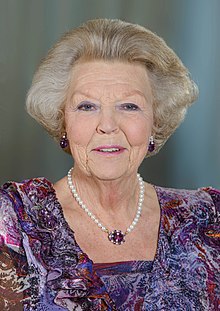 Princess Beatrix of the Netherlands (2015)

Princess Beatrix Wilhelmina Armgard von Orange-Nassau is the eldest of four daughters of Queen Juliana and her husband Prince Bernhard zur Lippe-Biesterfeld . The offspring in the royal family were cheered and welcomed by the public with numerous street parties. After the Wehrmacht occupied the Netherlands in May 1940, the royal family fled to Great Britain in the strictest of secrecy . From London , Queen Wilhelmina coordinated the Dutch resistance with her son-in-law Prince Bernhard, while her daughter Princess Juliana and the children there emigrated to Ottawa (Canada), where Beatrix attended elementary school. After her return to the Netherlands on August 2, 1945, she continued her education at De Werkplaats , a progressive school run by Kees Boeke in Bilthoven . In April 1950 she switched to the Incrementum school affiliated with Baarns Lyceum, where she passed the matriculation examination (language branch) in 1956.

On January 31, 1956, Princess Beatrix celebrated her 18th birthday and from that day she entered the State Council as the official heir to the throne . In the same year she began studying at Leiden University . In her first year at the university, she attended lectures in sociology , law , economics , parliamentary history and constitutional law . In the course of her studies there were lectures on the culture of Suriname and the Netherlands Antilles , she also studied the statute of the Kingdom of the Netherlands , intergovernmental affairs, international law , history and European law .

During her studies she visited various European and international organizations in Geneva , Strasbourg , Paris and Brussels . She was also an active member of the Leiden Student Union. In the summer of 1959, she passed her pre-examination in law and received her law degree in July 1961.

Princess Beatrix and Claus von Amsberg in the garden of Palais Soestdijk on June 28, 1965, the day of their engagement

On June 28, 1965, Queen Juliana and Prince Bernhard announced the engagement of Princess Beatrix to the German diplomat Claus von Amsberg . At first there was opposition to their wedding, as many rejected the Germans in the face of a hostile atmosphere against the former occupation country . Before the wedding could take place, government and parliament approval had to be obtained. In the autumn of 1965, first the House of Representatives and then the Senate passed the corresponding approval law.

On March 10, 1966, the mayor of Amsterdam, Gijs van Hall , celebrated the civil wedding in the city hall. The church wedding took place on the same day in the Westerkerk by Pastor Hendrik Jan Kater . The marriage produced three sons:

Before her accession to the throne, Beatrix lived with her family from 1963 to 1981 in the Drakensteyn Castle in Baarn , near her parents' residence, the Palais Soestdijk . Then she moved into the Huis ten Bosch in The Hague. Princess Beatrix has been living at Drakensteyn Castle again since 2014.

Prince Claus died on October 6, 2002 after a long illness. Eleven years later, on the eve of her abdication, Beatrix said on television: "Perhaps history will show that choosing this husband was my best decision ever."

The Dutch royal family is said to be one of the major shareholders of the Shell group. Princess Beatrix is ​​occasionally counted in the media as one of the richest women in the world. Her unspecified total assets are estimated at between 250 million and 2.5 billion euros. However, this was denied as a legend by Beatrix's father Prince Bernhard in 2003. According to this, the fortune of the Orange family amounts to just 250 million dollars. The King Wilhelm III. The stake established in 1890 is now to be held through various foundations and is now estimated at around 3.5%.

In addition to the Beatrixpark in Amsterdam, numerous public buildings, ships, streets and squares were named after her.

Because of her German father Prince Bernhard zur Lippe-Biesterfeld and her German ancestors as well as her German husband Claus von Amsberg , she speaks fluent German .

After her mother abdicated, Beatrix became Queen of the Netherlands on April 30, 1980 and carried out her function with more formality than her predecessor Juliana . Beatrix is ​​a long-term member of the Club of Rome and a regular participant in Bilderberg conferences .

The Dutch monarch does not hold a purely representative office like the head of state in other European states, and Beatrix in particular made full use of her room for maneuver. In this context, people in the Netherlands speak of the “black box” of Dutch politics, because nobody knows exactly how far the Queen's influence really went. Former ministers have stated on several occasions that Beatrix did not regard their suggestions as non-binding advice. The greatest possible influence was offered to her after a parliamentary election: Since usually no party clearly dominates in the Netherlands, but several are roughly the same size, it was up to Beatrix to appoint a certain politician to form a government . In 2012 the Dutch parliament decided to remove this role from the head of state. "Parliament does not need a royal arbitrator," said a member of the left-liberal party D66 . As a result, the powers of Beatrix and all of her successors were significantly reduced. 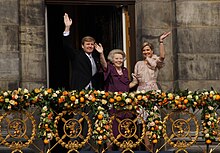 Beatrix, after she had just abdicated, between the new royal couple Willem-Alexander and Máxima , on the balcony in Amsterdam

On the evening of January 28, 2013, three days before her 75th birthday, the then Queen Beatrix announced in a short speech broadcast simultaneously by all radio stations in the country that on April 30, 2013, the Koninginnedag , she was in favor of her son Willem- Alexander - literally "Prins van Oranje" - will abdicate. According to the Dutch constitution, the handover took place in the “capital city of Amsterdam” with the signing of the deed of abdication in the Palais auf dem Dam and the subsequent “Inhuldiging” (enthronement) in the Nieuwe Kerk . With the signing of the deed of abdication by the Queen and Crown Prince, the constitutional change of the throne was carried out. Since then, Beatrix has held the title of princess again . Princess Beatrix has been living in Drakensteyn Castle in Lage Vuursche again since February 2014 , where she lived with her family before she became queen. She also has a house in The Hague.