The Netherlands Antilles were a Dutch overseas territory that geographically belonged to the Lesser Antilles archipelago in the Caribbean. From 1948 to 1954 they were an autonomous area and a colony in the succession of the formerly larger Dutch colonial empire . With the Statuut voor het Koninkrijk der Nederlanden of 1954, the Netherlands Antilles formed another country within the Kingdom of the Netherlands , alongside the (European) Netherlands and Suriname (until 1975).

The Netherlands Antilles included original six inhabited Caribbean - Islands and some smaller, uninhabited islands with a total area of 980 square kilometers. The islands that remained after the departure of Aruba in 1986 have a total area of ​​800 km². These are divided geographically into two groups that are more than 800 kilometers apart:

In 1845 the colony of Curaçao en Onderhorigheden was set up, which consisted of the six islands. In 1936 it was renamed Gebiedsdeel Curaçao (German: area Curaçao). In 1948 it was renamed the Netherlands Antilles .

On December 31, 1985, Aruba left the Netherlands Antilles and became an independent country within the kingdom.

After the reorganization of the political situation on October 10, 2010, Curaçao and Sint Maarten are autonomous countries within the Kingdom of the Netherlands, comparable to Aruba. The islands of Bonaire , Saba and St. Eustatius are special municipalities in the Netherlands, but do not belong to any province. Since then, people generally speak of the Dutch Caribbean Islands when referring to the six islands together.

The administration of the Netherlands Antilles has consisted of a government and the states , the parliament , since 1954 . The governor represented the kingdom's head of state, Queen Juliana or Queen Beatrix, and was formally head of government. Political responsibility, however, lay with the Prime Minister and the ministers. The last Prime Minister was Emily de Jongh-Elhage . The states of the Netherlands Antilles had 22 seats, distributed among the islands according to a fixed formula: 1954 to 1985 12 for Curaçao, 8 for Aruba, 1 for Bonaire and 1 for the SSS islands; 1986 to 2010 14 for Curaçao, 3 for Sint Maarten, 3 for Bonaire, 1 for Sint Eustatius and 1 for Saba. Government coalitions were usually formed from the parties from the various islands. On October 9, 2010, the states disbanded themselves in their last session in the presence of the then Prince Willem-Alexander and the then Princess Máxima as well as the chairmen of the First and Second Chambers of the Staten-Generaal of the Netherlands.

Since the beginning of 2006, the islands have been the cause of foreign policy differences between Venezuela and the Kingdom of the Netherlands. Venezuelan President Hugo Chávez claimed that the Netherlands would allow the US to build military bases that would be used for a planned invasion of Venezuela. On May 23, 2006, an international military maneuver ( Joint Caribbean Lion 2006 ) began with the participation of the US Navy .

Reform of relations within the kingdom

In the early 1990s a discussion began about the political future of the Netherlands Antilles. Some politicians on Curaçao and Sint Maarten, including members of the then Antilles government, advocated autonomy (status aparte) for their islands based on the model of Aruba. In referenda on the various islands in 1993 and 1994, however, the majority of those entitled to vote voted for the continuation of the “newly structured” Netherlands Antilles. On Curaçao z. B. At that time, 73.6% voted for remaining in the Netherlands Antilles, 17.9% for autonomy, 8% for integration into the Netherlands (as a province or municipality) and only 0.5% for complete independence. The result was comparable on the other islands, only on Sint Maarten a large minority of 32% was in favor of autonomy. The government then resigned.

According to a decision made on December 15, 2008 on Curaçao, the Netherlands Antilles were dissolved as a political entity on October 10, 2010.

Dutch and Papiamentu were the two official languages ​​of the Netherlands Antilles. On the Leeward Islands (St. Maarten, Saba, St. Eustatius) English was the lingua franca, on the Leeward Islands (Bonaire, Curaçao) Papiamentu was the lingua franca and the second official language. In the primary school, lessons in schools were either in English or Dutch (St. Maarten, Saba, St. Eustatius) or Papiamentu or Dutch (Bonaire, Curaçao). From middle school (5th grade) onwards, classes were only held in Dutch because the final exam was in Dutch and the same exam as in the Netherlands. Further higher education took place in the Netherlands. From the 2008/09 school year on Curaçao, lessons were no longer given on Papiamentu, as too many deficits had emerged (e.g. there were only Dutch-language textbooks). The Catholic School Association therefore decided to start teaching in Dutch again from the first grade in the 2008/09 school year. This also corresponded to the wishes of the majority of the population. For years, registrations for Dutch-speaking schools have been tens of times higher than places available. The final exams were held in Dutch.

All public notices and laws have been drawn up in Dutch. The literature of the islands of the former Netherlands Antilles was mainly written in Dutch and Papiamentu, only a small part in English and Spanish . The following table gives an overview of which language had how many native speakers. 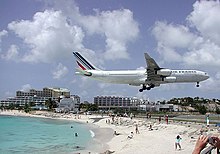 Airbus A340 of Air France landing at the Princess Juliana Airport

The electricity grid in the former Netherlands Antilles is 110  volts and 60  hertz .

Sint Maartens Airport, the Princess Juliana Airport , deserves a mention. Its location attracts and inspires numerous onlookers . In most cases, the landing approach leads over the water until shortly before the aircraft touches down. Immediately in front of the runway there is a beach that is often visited by onlookers and other interested parties, despite or precisely because of the considerable noise and the sometimes violent gusts caused by the aircraft. Some of the planes approach the runway over the beach at a height of only about 20 meters.

In addition to tourism , which was the main source of income for the islands, the islands served as a center for numerous banks . There were also smaller oil refineries .

The probably most important author of the Netherlands Antilles is Frank Martinus Arion (1936–2015) from Curaçao . His novel Dubbelspel (1973) , written in Dutch, is also available in a German translation ("Double Game"). The diplomat Carel de Haseth is one of the most famous writers and poets. He writes in Dutch as well as in Papiamentu .

Amigoe is a resident daily newspaper in Dutch. Antilliaans Dagblad is another newspaper. There are also numerous newspapers in the local Papiamentu language. The most common is the Extra newspaper.