The title of this article is ambiguous. Further meanings are listed under Bank (disambiguation) .

A bank is a credit institution that offers services for payment , credit and capital transactions against payment . Depending on the type of a bank operates lending business , savings management ( deposit business ), custody of and trading with securities . In the case of a universal bank, all business areas are covered. In Germany , a credit institution is legally defined in Section 1 of the German Banking Act (KWG) as a commercial company that conducts banking business. According to Section 39 KWG, only companies that have a banking license may use the designation “bank” . The entirety of all credit institutions as well as the legal regulations are referred to as banking .

The word bank in the sense of money bank or credit institute is etymologically identical to bank in the older and actual sense of the word “seating for several people.” This Germanic word ( common . * Banko > ahd. And mhd. Bank ; old English benc , new English bench etc.) ) came into the vulgar Latin ( bancum ) or Romance dialects spoken in Italy and Galloramania at the time of the Great Migration . Forms starting with p, which can be found in some northern Italian and Tuscan dialects (Tuscan panca ), can be traced back to the East Germanic language of the Lombards , in other regions the word may be introduced by other tribes ( e.g. by the Franks or the Goths) have been. In old Italian, banco (masculine; but also banca , fem.), As in Germanic, initially meant seating, later the “exchange table”, which money changers or lenders used to do their business in markets. At the time of the Italian Renaissance , when the foundations of modern banking were laid in Florence and Venice in particular , the name was finally transferred to the credit institution as such; The Banco Medici and the Banca Monte dei Paschi di Siena, which still exist today, are among the most famous financial institutions of this era . With this new meaning, the word was leaned back into German in the 15th century and also made it into almost all European languages, partly through French, for example in the case of von englisch bank . In German literature, too, the French spelling banque was often found up into the 19th century , and the French model also gave rise to the fact that German bank, unlike Italian banco, is grammatically female. 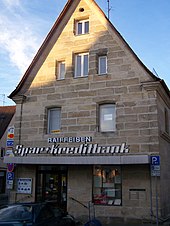 Branch of a cooperative bank

Cash desk of a branch of the Commerz- und Privatbank in Leipzig, around 1925

The earliest forerunners of modern banking are believed to be in Mesopotamia . People there probably knew as early as the second millennium BC. The accounting of accounts receivable , the account management for deposits as well as bonds , checks and bills of exchange .

In the 4th century BC BC Athens was the largest banking center in the Greek world . Temple banks (e.g. on Delos and in Ephesos ; also in the Seleucid Empire in Sardis ), urban banks (e.g. in Kos and Miletus ) and private banks (e.g. on Rhodes and Delos) are known from Hellenistic Greece , which issued guarantees and among other things Mortgage and ship loans granted. In the empire of the Ptolemies there was a central state bank in Alexandria with many branches, which also served the financial administration of the empire, collected taxes and also maintained grain banks and accepted payments in grain. Money transactions were made cashless by transferring from one account to another. However, the particularly high interest rate in Egypt (up to 24 percent) led to usury and blackmail between private individuals.

In Europe , the first pan-European banks flourished in the 13th century when Florence rose to become a trading power and banking there began to flourish. As original wholesalers, commissioners or forwarding agents, the first bankers turned to the banking business through the credit and exchange business related to the commodity business.

The Bardi , Peruzzi and Acciaiuoli from Florence were among the first and most important banking families at the time. At the beginning of the 14th century, these had branches in practically all the most important cities in Europe and de facto held the monopoly of papal finances. When the English King Edward III. In 1345, refusing to repay his Hundred Years War debt, they got into enormous trouble and eventually lost their influence. After the bankruptcy of the most important banks at the time, Vieri di Cambio de 'Medici built a widely branched bank with several branches in the most important European cities between 1348 and 1392. Among his pupils and later partners was his nephew Giovanni di Bicci de 'Medici , who first ran the branch in Rome and took it over in 1393. While the once very successful banking house of Vieri di Cambio de 'Medici, after his age-related retirement in 1393, went under under the leadership of his two sons, his nephew's banking house was extremely successful. Two years after the death of his uncle, Giovanni di Bicci de 'Medici moved his activities to Florence in 1397 and founded the Banco Medici . This formed the basis of the later rise of the Medici to one of the most powerful families of that time in Europe.

Already in 1327 the Islamic been hawala financial system from b jurist Abu Bakr. Mase-ud al-Kasani represented as an institute of Islamic law .

In 1407 the Banco di San Giorgio was founded in Genoa . In contrast to the previous family banks, this bank was organized in a company-like form. It is considered to be one of the oldest banks in the world and for a long time stood alone in its kind as a discount and slip bank until it was closed by Napoleon in 1805 .

Worldwide headquarters of the Bank for International Settlements in Basel

The first Monte di Pietà was founded in Perugia in 1462, and several others, independent of each other, followed in various Italian cities. At that time the Monte di Pietà were founded by Franciscans as pawn shops to support poor and needy people financially, while the banking families of the time, such as the Medici or the Strozzi , mainly devoted themselves to the credit and exchange business related to the goods business. The Banca Monte dei Paschi di Siena , founded in 1472 as Monte di Pietà in Siena , is the oldest bank in the world that still exists.

Banks are needed in an economy based on the division of labor , since the services of the economic subjects are exchanged with the interposition of money . The intermediaries for this flow of money are the credit institutions. Furthermore, they ensure the balance between investment and credit requirements.

Due to their special importance in the business community, credit institutions are usually subject to a number of national and international statutory and supervisory regulations (for example, when making appointments to management, accounting, etc.) and are usually also subject to banking supervision by a specially competent authority. First of all, the Bank for International Settlements , which was set up in 1930 and is based in Basel (Switzerland), should be mentioned here. It is commonly referred to simply as the “global central bank of central banks”.

Functions of the bank

Money that is not needed immediately can be saved by customers for later use. Companies that make large investments can usually not finance them entirely from their own resources. By taking out loans, investments can be partially financed with outside capital . The receipt of savings and other assets for safekeeping and the granting of loans form the classic business basis of a bank. 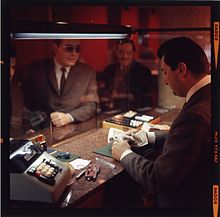 The banks' customer groups can be divided as follows:

The corporate customer business includes the granting of loans to companies as an important sub-task .

The bank's business with states and local authorities includes, for example, services for the issue of government bonds .

The trading relationships with other banks are summarized under the term interbank trading .

The annual financial statements are not significantly different for banks either. However, there is a special bank balance sheet . The cost and performance accounting takes place at banks in the cost and revenue accounting , see there.

In Germany, the Banking Act is the legal basis for credit institutions. In Austria , which initially took over the German provisions after the end of the Second World War, a modified, Austria-specific banking law came into force in 1979, which was changed again in 1986 by means of an amendment to the law and was replaced entirely by the new banking law in 1994.

A specialty of Switzerland , which partly also applies to Austria, is banking secrecy . In Germany - contrary to popular belief - there is no law on banking secrecy that protects against access by the state to data.