Sardis ( ancient Greek Σάρδεις Sardis , also Σάρδις Sardis ; today Turkish Sart ) was the capital of the ancient kingdom of Lydia , later seat of a judicial district ( conventus ) in the Roman province of Asia and in late antique and Byzantine time capital of the province of Lydia. It is located in Hermostal at the foot of the Tmolos Mountains , on whose towering summit the citadel was located, approx. 20 km south of Hermos. The remains of the city are about ten kilometers west of today's Salihli in the Turkish province of Manisa .

Importance of the city

The city's importance lay on the one hand in its military strength, on the other hand in its strategic location on an important road leading from the inland to the Aegean coast and, thirdly, in its influence on the vast and fertile Hermos plain.

The former Kingdom of Lydia was highly developed in handicrafts and trades and Sardis was the headquarters of production, at the center of which was the manufacture and dyeing of delicate woolen materials and carpets . The statement that the small river Paktolos ran over golden sand at the market can be used as a metaphor for the wealth of the city, to which the Greeks of the 6th century BC. For their gold supplies; Gold mining and trading were the real sources of this wealth.

Herodotus traces the founding of the city back to the Heraclid dynasty , who saw themselves as descendants of Heracles . The last king of this dynasty is said to have been Kandaules . Gyges , bodyguard and spear-bearer of King Kandaules, was ordered to secretly admire the beauty of his wife. The queen, who saw the ruse and was deeply wounded in her honor, gave Gyges the choice of murdering her husband or of dying on the spot herself. Gyges killed the king, succeeded him and married the queen.

In Hittite times the city was probably called Uda, under the Heraclid it was called Hyde. The ascension to the throne of Gyges and with him the Mermnaden family is known around 675 BC. Dated. 647 BC Gyges fell against the Kimmerer. His son Ardys (647–605 BC) and his grandson Alyattes (600–555 BC) succeeded the throne. Alyatte's son, Kroisos (555-541 BC) becomes the last ruler of the Mermnaden in Sardis. With him the kingdom of Lydia ended .

Kroisos was defeated by the Persian great king Cyrus II . Sardis became the capital of the Persian satrapy Lydia under the name Sparda . Sardis was also the starting point for the 2,500 km long Persian royal road to Persepolis . In 499 BC BC Sardis and its temples were destroyed by the Greeks during the Ionian revolt , which was avenged by them in the subsequent Persian Wars.

Sardis was the starting point of the procession of the ten thousand described by Xenophon in the Anabasis.

Tissaphernes , since about 413 BC. BC Satrap in Sardis, supported the Spartans in the Peloponnesian War through the mediation of Alcibiades . 401 BC The mighty satrap of Sardis fought against the rebellious Prince Cyrus , who was killed in the process. With the victory of Alexander the Great in the Battle of Granicus in 334 BC BC Sardis came into the Hellenistic sphere of influence.

Under the Seleucids , Jewish war veterans were settled in Sardis , which in turn later fostered the emergence of an early Christian community . In the years 216 to 214 BC In BC Antiochus the Great besieged the city in order to seize power in the country and was finally able to conquer it thanks to a trick of his generals Theodotos of Aetolia and especially Lagoras . From 133 BC BC Sardis became part of the Roman province of Asia and the capital of a judicial district. Up until the Roman period, the city minted its own small change made of bronze for local needs. 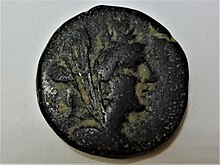 Bronze coin from Sardis with a Tyche head, 2nd century BC Chr. 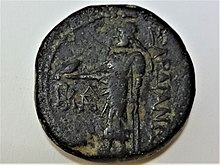 Reverse side of the coin depicting Zeus Lydios

In 17 AD, Sardis was struck by a severe earthquake that devastated the entire district. Thereupon Tiberius exempted the city from all taxes for five years and also donated 10,000,000 sesterces for reconstruction.

According to biblical tradition, Sardis is said to have housed a Christian community shortly after the death of Jesus, which was one of the seven communities of the Revelation of John . In the second and third chapters of Revelation, the churches should be encouraged and exhorted.

To the angel of the church in Sardis, write: This is what He says, who has the seven spirits of God and the seven stars: I know your works. You live by name, but you are dead. Wake up and strengthen what is left, what was already dying. I have found that your actions are not of full value in the eyes of my God. ( Rev 3 : 1–2  EU )

When Constantinople became the capital of the Byzantine Empire , a new system of roads developed connecting the provinces with the capital. Sardis was increasingly marginalized and lost its importance. However, the city retained its formal sovereignty and from 295 it remained the bishopric of the province of Lydia.

After Ephesus and Smyrna, the city ​​took the third place among the cities of Thracian themes under Constantine VII Porphyrogennetus in the 10th century; but over the next four centuries it fell into the shadow of the provinces of Magnesia ad Sipylum and Philadelphia , which cemented their role in the region.

The Seljuks and the downfall

The Hermostal was affected by the attacks of the Seljuks at the end of the 11th century; but the successes of the Greek general Philocales in 1118 relieved the region during the time of the Comnenes , so that the city remained under Byzantine rule. The land around Sardis was frequently devastated by Christians and Turks in the 13th century. Soon after 1301 the Seljuks overran the Hermos and Kaystro valleys and in 1306 they were contractually awarded a fort on the citadel of Sardis. The city's decline continued until its capture (and likely destruction) by Timur in 1402 .

19th century and a new beginning

Until the 19th century Sardis was desolate and mainly buildings from the Roman period were visible. Harvard and Cornell Universities have supported annual archaeological expeditions to Sardis since 1958 . Today's ruined city gives an idea of ​​its old splendor through its partial restoration .

From 1910 to 1914, members of Princeton University dug in Sardis, the temple of Artemis and more than 1,000 Lydian graves were uncovered. The First World War put an end to this venture, and Harvard University in America only started digging here in 1958. The reconstructed gymnasium from the 3rd century to the north of today's main street is worth seeing , as is the synagogue richly decorated with floor mosaics and inlays on the walls , probably from the same period. The remains of residential and commercial buildings lie along the long side. On the southern side of the street in Sardis, Greece, stands the Temple of Artemis, built from the 4th to the 2nd century BC. BC, which in its planned dimensions should approach the temples of Ephesus and Didyma , but was never completed.