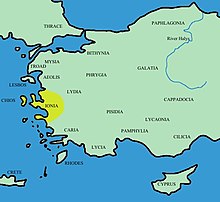 The rebellion of the Greeks from Asia Minor and Cyprus against Persian supremacy is called the Ionian Uprising . It began 500/499 BC And ended with a victory of the Persians in the sea ​​battle at Lade in 494 BC. Chr.

Prehistory of the uprising

The Ionians were at the beginning of the 1st millennium BC. Chr., As previously, the Aeolians and Dorians , as colonists from the Greek immigrants from the mainland and established a number of cities on the west coast of Asia Minor. With sea and long-distance trade - from the Black Sea to the Aegean Sea to the Eastern Mediterranean and to Egypt - they achieved economic prosperity and political importance. Already around 800 BC They founded the Ionian League .

After a brief and mild supremacy under the Lydian king Kroisos around 550 BC. BC followed as early as 547/546 BC Belonging to the Persian multi-ethnic empire . Even though tributary , the cities were able to maintain a certain independence and extensive economic autonomy. The background for this was the Persian principles of leaving the areas of the empire as political self-government as possible and leaving the cultural and religious life of the peoples untouched. As in all 20 satrapies, the Persian “ tyranny ” presented itself as a personal-feudal relationship, according to which the satrap, as the governor of Persia, chose local nobles as confidants who exercised power and collected the tributes. Up until the Ionian uprising, this was forced to accept.

Before 500 BC In BC Persia hardly noticed the Greeks. The entire western trade of the empire was in the hands of the Ionian cities - therefore all Greeks were “Yaunã” , or “Ionians”, for the Persians . The city of Athens and the geography of the Greek area were completely unknown to them for a long time. The focus of the Persian expansion policy lay immediately west of the Persian heartland: the conquest of Babylonia was followed by the incorporation of all of Mesopotamia , then Syria and Canaan ( Phenicia , Palestine ). The few campaigns in the extreme west must be viewed as unsuccessful attempts to expand the empire there beyond its natural limits. From the Ionian point of view, however, the damage caused by these less ambitious expeditions was immense, because the vital trade connections were now destroyed.

Causes of the uprising

According to Herodotus (5.30ff), the rebellion of the Ionians was the result of an unsuccessful campaign and political intrigue. After the Scythian campaign, the Persian army returned to their ship bridge over the Danube. The Greeks advised the Ionians positioned by the bridge to demolish the following. But the tyrant of Miletus, Histiaios , was able to prevent his followers from doing so. In gratitude he received the city of Myrkinos in Thrace from Darius . However, the general Megabazos did not trust his loyalty and managed to convince the great king to use Histiaios as an advisor in Susa. Thereupon Darius installed the son-in-law of Histiaios as the new tyrant. The tyrant of Miletus , Aristagoras , who had just been appointed by the great king , had persuaded Artaphernes , the satrap of Sardis , to campaign against Naxos at the instigation of Naxian refugees . With the support of the Persian Empire, 200 ships were mobilized. However, during the crossing to Naxos, there was a dispute between Aristagoras and the Persian commander Megabates , after the latter wanted to punish an inattentive ship command and Aristagoras was able to prevent this. Megabates is said to have warned the Naxians. Thus, after four months of siege, the company failed. Fearing that he would be held responsible, Aristagoras fell away from the great king and sought allies to put his apostasy on a broader basis. He made sure that the Ionians rose and the tyrants were overthrown.

The real background, however, may have been a severe economic crisis in the trading cities - and it was indeed Miletus that was hit particularly hard. 525 BC The Persians invaded Egypt. Trade with Naukratis , the only Greek emporion with the privilege of Pharaoh , had come to a standstill. Since the Scythian campaign in 513/512 BC Persian occupations blocked the passage to the Black Sea and the numerous colonies there. All imports of gold, silver, copper, iron, lead, tin, wood, salt, grain, fish and animal hides collapsed. The next blow came in 510 BC. BC, when Sybaris in southern Italy was destroyed by the neighboring town of Croton and thus also the western trade was torn down.

Under these conditions the political mood in the Ionian cities turned. Now the tyranny was felt to be unbearably oppressive - possibly the motive for Aristagoras to change sides in time and to resign as the tyrant of Miletus. The restriction of the autonomy of the polis has always hit the sensitive nerve of the Greek self- image , but now the Persian foreign rule was made the central motive of the revolt. With the slogans of "Ionic liberation" and "liberation of the Greeks from the Persian yoke" one could hope for a broad consensus.

Course of the uprising

Military operations during the uprising.

At first the uprising spread like a wildfire. It spread to the neighboring regions. Everywhere calls for the overthrow of foreign rule and the restoration of independence from the polis were called. But there were problems: according to Herodotus, Aristagoras tried to campaign for intervention in Asia Minor in Sparta and Athens . He lamented the "enslavement" of the Greeks and held out the prospect of "easily gaining control over all of Asia". But only the poleis of Athens and Eretria sent in 499/98 BC. Smaller fleet squadrons of 20 or five ships, which remained largely ineffective. 499 BC Although the important city of Sardis , the seat of the local satrap, could be captured, the rebels were already awaited and defeated by Persian imperial troops on the march back.

In their deliberations at the beginning of the uprising, the cities also failed to equip the Ionian Confederation for the politico-military conflict by creating federal institutions. There were also skeptics like the geographer Hekataios , who tried to use a map of the world he had made to show the hopelessness of a fight against the vast empire of the Persians. Now the Persian Empire mobilized its forces and won as early as 497 BC. BC Cyprus back. Under this impression, there were ultimately only nine poleis that offered resistance. 494 BC After the battle of Ark , Miletus was conquered and burned to the ground. The Ionians had to submit to the Persian great king Dareios I , who never forgot the role of Athens in this conflict and soon afterwards planned a punitive expedition against the supporters of the rebels, Athens and Eretria.

Consequences of the uprising

The rebellion of the Greeks of Asia Minor against Persian rule was undoubtedly a political insubordination that could not be accepted from the perspective of the power interests of the Persian king. However, two circumstances should have devastating consequences. On the one hand, the great king did not tolerate in any way the fact that Persian territory had been violated by foreign "third parties", the Greeks of the mainland. On the other hand, there was a comprehensive desecration of Persian sanctuaries, especially in Sardis, during the uprising. According to the Greek understanding, this gave the right to revenge and retribution. In the subsequent Persian Wars, European Greece felt the hardship of the consequences.

In Asia Minor, however, the Persians took a remarkable course. Instead of reprisals , Darius tried to restore peace and order to the peoples of his empire. He ordered Ionian envoys to Sardis and obliged them to form mutual alliances in order to create justice and prevent looting. He had some of the grievances that had led to the uprising remedied and also gave way on the question of the polis constitutions, so that some cities were able to return to Greek democracy . Furthermore, he ensured a fairer distribution of the tax burden through a new cadastral record, even if this did not change the total amount of the tributes.

479 BC The Ionian cities rose again and fell from Persian rule. Previously, after the lost battles at Salamis and Plataiai , the Persians had to withdraw from Europe and were now defeated in the sea battle at Mykale , where the federal sanctuary of the Ionians was located, also in Asia Minor. The Peace of Callias 449/448 brought a balance of the spheres of interest for the following decades until the Achaemenid Empire regained control of the western Anatolian Greek cities as a result of the Peloponnesian War , which was confirmed in the King's Peace 387/386.