Phenicia ( ancient Egyptian tau (i) -Fenchu , idebu-Fenchu ; Mycenaean po-ni-ki ; ancient Greek Phenicia , Phoinike for purple land) is the name of a narrow strip of land on the eastern Mediterranean coast in the area of ​​the present-day states of Israel , Lebanon and Syria . The area extended from Dor in the south through Tire , Sidon , Beirut , Byblos and Arwad to Tartus in the north. The marine area along the coast was known as the Phoenician Sea . The inhabitants of the strip of land did not call themselves Phoenicians , but instead named themselves after the names of the cities in which they were based.

Phenicia belonged to since 63 BC. BC - together with Syria - as a province of Syria to the Roman Empire. A Phoenician colony that was geographically in what is now Tunisia was Carthage , which before the rise of Rome ruled the western Mediterranean and founded numerous colonies on its coasts (southern Spain, northwest Africa, Sardinia, Corsica, Sicily, Malta). The Romans called the Carthaginians Poeni ( Punians ).

The name "Phenicia" could from the since Homer occupied Greek term " Phoinikes derived" ( "Φοίνικες"), which in turn with the Cretan Linear B -Begriffen "po-ni-ki-ja", "po-ni-ke- a ”and“ po-ni-ki-jo ”(“ phoinikion ”?). However, an unequivocal assignment remains uncertain. "Phoinikeā" and "po-ni-ke-a" are shown as crimson in lists of mounted (horse) wagons; "Po-ni-ki-jo" for a spice or a plant; in this context also for “ kaptaru ” as Cretan juniper fruit .

There may also be a connection to the terms "po-ni-ke" ("phoinikei") and "po-ni-ki-pi" ("phoinikphi"), which refer to the processing and decorating of wooden furniture in the context of the meaning of the word for “ palm / n” (especially date palm ). In addition, the dyeing of fabric with the help of purple snails was another typical Phoenician craft .

In ancient Egyptian sources Phenicia is mentioned under the name "fenchu". The Egyptian name is derived from "fench" ( carpenter, carpenter ) and refers in particular to the trade or craft with wood. Among other things, Egypt imported the cedar growing in Lebanon . In this context, the Fenchu ​​were nicknamed " tree fellers ".

Representation of the probable settlement areas, historical map from 1902

Herodotus claims that it was around 2750 BC. First settlements in Phenicia given. The first mention of the Fnḫw (Fenchu) in Egypt probably comes from the time of Niuserre ( 5th dynasty of the Old Kingdom ) in the 25th century BC. Chr. From the story of Sinuhe shows that Fenchu (Phenicia) already in the Middle Kingdom (21st-18th century BC...) To the countries of the Levant belonged:

“Maki from Qedem , Chentiujawesch from Chenet-Kasch and menus from the two countries of the Fenchu; these are rulers of recognized names ... without thinking of Retjenu , who belongs to you (Egypt) like your greyhounds . " 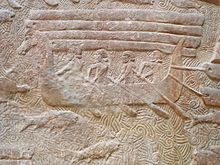 Transportation of Lebanese cedars to Mesopotamia ; from the palace of Sargon II (end of the 8th century BC)

Around the 15th century BC The city-states of Sidon, Tire and Byblos were formed , which in turn established trading colonies in the Mediterranean. From Keftiu ( Crete ), linear B texts (15th – 12th centuries BC) document trade relations with the Phoenicians, where they are named po-ni-ki-jo . Corresponding representations can also be found in the Theban graves from the time of Thutmose III. and his successors: tributes are made from Keftiu and the islands in the middle of the great greenery as well as from Retjenu. Every hidden land and island of the Fenchu ​​are subject to Egypt . Thutmose II mentioned in his victory inscription the lands of Fenchu (city-states) as the sovereign territory of the Egyptians in connection with Retjenu. In an inscription , Seti I boasted that he had destroyed the lands of the Fenchu .

Around 875 BC BC Phenicia was forced by the Assyrians to pay tribute. 573 BC Tire was conquered after 13 years of siege by the Babylonian king Nebuchadnezzar II . From 539 BC BC Phenicia belonged to the Persian Empire . After participating in the Egyptian uprising against the Persian king Artaxerxes III. Sidon became 343 BC. Chr. Destroyed.

Tire was born in 332 BC. Destroyed by Alexander the Great after being the only Phoenician city to resist his army. After the death of Alexander, Phenicia lost its importance. The area came under the rule of the successors of Alexander ( Seleucids , Ptolemies ).

In the 1st century BC In BC Phenicia was conquered by the Armenian king Tigranes II . Shortly afterwards it fell to the Roman Empire .

Due to the geographical location and later trade relations, the Phoenician culture was shaped by Egypt , the ancient Near Eastern cultures and the Mediterranean region. The Phoenician alphabet , which appeared in the 12th century BC. BC, became the basis of both European scripts ( Greek , Latin , Cyrillic ) and Hebrew and Arabic script .

A triad of gods resided over the inhabitants of Tire, Sidon, Arwad, Byblos and the submerged Ugarit .

At the head of this combination of three was a father god named El , whom the Greeks later occasionally identified with their Kronos . At his side stood his wife Aschera or Astarte , who was called Baalat in Byblos , which could be translated as "our dear wife". Then came the god Baal , the son of both , whom the Giblites also called Adon, Adoni or, in Greek, Adonis , the Lord, while the Tyrians worshiped him as Melkart and the Sidonians as Eschmun . Each of these three heavenly rulers represented and embodied a number of certain natural forces and phenomena. They also had close relatives in all other oriental gods .

El, who was called Baal in Sidon, is the most powerful god in this triad. He seems to have had such great and all-encompassing powers that one seldom dared to look at him closely and to humanize him. Only in a few texts from Ugarit is he, like Zeus, characterized as an unfaithful husband.